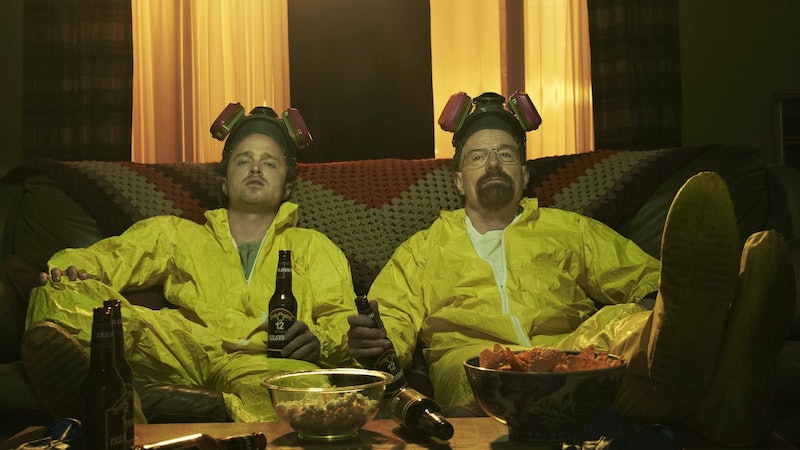 With news of yet another Internet hoax claiming there will be a sixth season of Breaking Bad (sad face — there won't be!), it feels like the right time to ask why we're still so hopeful that Walter White isn't dead and that we'll get to spend some time with Jesse (aka Aaron Paul) again. Why, exactly, aren't we over Breaking Bad yet? With a super satisfying finale, and almost all loose ends tied up, it's a little strange we're so desperate for Vince Gilligan and co. to reunite and bring us more Walter White. When will we be done with Breaking Bad, exactly?

I was completely obsessed with Breaking Bad when it was on. It seemed like a show hadn't caught the imagination of the world quite like Breaking Bad did in years. Which is why critics reignited us of the phrase "Golden Age of Television" to account for Breaking Bad's success, along with similarly awesome shows on at the same time, including Mad Men. TV had come into its own, providing us with shows that were no longer episodic or predictable, but instead told long form stories, looked totally cinematic, and featured fantastic actors like Bryan Cranston and Jon Hamm, whose talents had somehow not been taken seriously before.

Despite being gifted with a prequel to Breaking Bad in the form of Better Call Saul — thank you thank you thank you Netflix! — TV addicts and super fans continue to share spoof articles and fake interviews with the show's creators claiming that more Breaking Bad is in the works. Surely, Better Call Saul is better than nothing? Actually, it goes one further, actually being a decent show, particularly as it showcases the underrated talents of Bob Odenkirk. Breaking Bad is dead and buried, and forever available to marathon watch, but something about the disappointment on people's faces and News Feeds whenever it's pointed out that news of a revival is completely untrue is testament to the fact that love for the show is very much current and alive.

Perhaps the real problem is a lack of shows to replace Breaking Bad with. In terms of content, story, script, cinematography and acting it was quite simply amazing, and maybe there's just nothing that quite lives up to its magic. Other shows still running like Game of Thrones or new shows like Narcos often get talked about a lot, but lack the universal appeal of Breaking Bad. And it's not as if, content-wise, Breaking Bad was something you'd expect everyone to be watching. Explicitly about drugs, its appeal was almost unfounded, but ever-present. The lead performances of Aaron Paul and Bryan Cranston are undoubtedly responsible for much of the obsessive fanbase.

Breaking Bad tackled questions of morality head on, and urged us to consider what we might do faced with the worst situation we could think of. Very much existing in reality, we lived out each of Walter White's choices as he battled cancer, supported his family, and became a drug overlord. Letting us into this secret world, whilst retaining a sense of normal everyday life, contributed to the feeling that we were all on Walt and Jesse's journey with them. Plus, they were both super hotties, let's be honest. The fact that Bryan Cranston and Aaron Paul inspired fans to divide into teams — Team Walt or Team Jesse — shows the fierce loyalty viewers felt when watching the show. Emotions this major don't happen often when it comes to television.

Someday soon, something every bit as beautiful, tense, heartbreaking and surprising as Breaking Bad is going to come along. We'll never forget Walter White, but maybe we'll find something, or someone, just as satisfying. I mean, I doubt it. Be serious! But maybe.