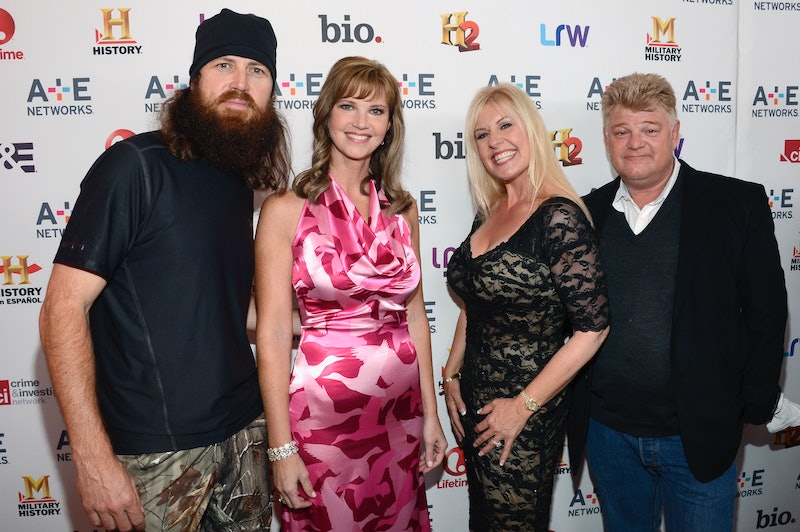 The reality TV show Duck Dynasty is all about long beards and guns, but that's not the only thing this extended Louisiana family has to offer. Wife of Jase Robertson and daughter-in-law of patriarch Phil Robertson, Missy Robertson, is teaming up with Southern Fashion House for her own clothing line, which will feature consciously trendy, everyday clothing with more modest silhouettes.

Missy seems like a sweet woman, and I wish her all the best in this new venture. But I'll be honest, my first reaction to the news was the same sort of eye roll I usually reserve for updates concerning Adam Levine. Why?

It's no secret that fashion collaborations are getting a bit out of control. Every morning brings a new collaboration announcement. Whether it's couture gone commercial (Missoni for Target), celebrity gone couture (Chloe Sevingy for Opening Ceremony), celebrity gone cheap (Adam Levine for Kmart), or a partnership that's just plain weird (Heidi Klum for Babies 'R' Us), it seems like all you have to do to get your name on a fashion line is to appear on TV for longer than five minutes.

But even in this collab-saturated environment, we're more likely to give mega-celebrities a pass. Jay Z is no fashion designer, but his recent collaboration with Barneys brought in a cool $1 million. The weight of a celebrity name translate into major sales and big-name collaborators (Jay Z worked with Balenciaga and Balmain, among others), but there's more to it than that. After all, major celebrities are practically fixtures of the fashion industry already. They're dressed by designers, they have stylists, they attend red carpet events in priceless vintage pieces, they wear couture in movies and music videos.

But reality TV stars? They're just famous — for being famous. For being filmed 24/7. For being bonkers. We're talking about people whose Wikipedia profiles refer to them as "American television personalities." And our distrust of the reality TV star's validity for anything other than throwing stuff on camera is often reflected in just how badly their poor fashion lines do.

Just look at how Heidi Montag's line, Heidiwood, was received ("Flimsy, panty-line-molesting dresses…"). Or JWoww's short-lived line, Filthy Couture. Teen Mom's Kailyn Lowry sorta kinda put out a line of onesies, and Nene Leakes of Real Housewives of Atlanta is apparently designing a line for curvy girls. But let's be honest, these are simply tabloid items of interest — not valid fashion news.

Reality TV stars just don't have the infrastructure in place that their bigger-named counterparts do. They're not necessarily rubbing shoulders with Anna Wintour at parties, as the Girls girls just did, or dreaming up leather backpacks with Balengiaca, like Jay Z. They have money, and they're in the public eye, so when they want to design something, they can.

But as much as we love to watch them flail, most of these American television personalities, don't have the connections — or the cultural caché — to successfully venture into fashion. We'll see if Robertson, whose comes from a dynasty of clever businessmen, will prove different.

More like this
Target Dropped *Two* New Fashion Collabs With Queer-Owned Brands
By Dominique Norman
Kylie Jenner Wore A Literal Wedding Gown To The Met Gala
By Jamie Feldman and Kelsey Stiegman
Machine Gun Kelly Wore A $30K Diamond Mani To The BBMAs
By Paris Giles
How To Master Baby Braids, According To TikTok
By Tomi Otekunrin
Get Even More From Bustle — Sign Up For The Newsletter