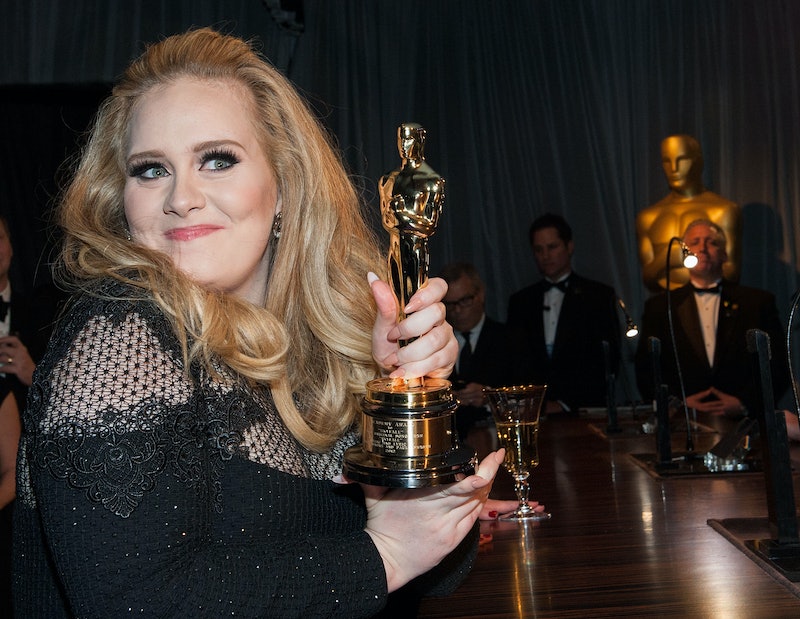 Since Adele's latest single "Hello" was released, she's been making headlines non-stop, and excitement for her album 25 is growing at warp-speed. Her upcoming appearance on Saturday Night Live on November 21st, alongside host Matthew McConaughey, is sure to be epic. So far, "Hello" has smashed the 24-hour VEVO Record, previously held by Taylor Swift's "Bad Blood" video, by garnering over 27.7 million views in its first day on YouTube. Since then, endless parodies and cover versions have surfaced (this one featuring Joe Jonas dressed as a clown is particularly good). If Adele's previous outing on SNL is anything to go by, she'll hopefully perform several songs, and maybe even be involved in some of the skits. During her 2008 performance, Adele sang "Chasing Pavements" and album track "Cold Shoulder" — so what are the chances that she'll debut a new single on SNL?

Well, what do we know about Adele's new music so far? In a recent interview with i-D, Adele said, "I was very conscious not to make 21 again. I definitely wasn't going to write a heartbreak record 'cause I'm not heartbroken, but I probably won't be able to better the one I did, so what's the point?" Adele also previewed her album for i-D (lucky!), who describe the sound as "firmly centered in contemporary pop, although there are some very decisive nods to the '70s," saying that it's a departure from the "distinct soul, R&B and bluegrass overtures" of her first two albums. There's a lot to look forward to, and a new kind of sound to hear from Adele. Hopefully on SNL. Please?

When Adele previewed "Hello" on BBC Radio 1, for the first time, she said, "I obviously want people to like it." While Adele totally doesn't need to worry about whether the public enjoyed her first single, she should know that we're all itching to hear more new songs from her. With her album, 25 , out on November 20th, we luckily don't have to wait very much longer to have more Adele in our lives, but the big question really is what her next single will be. "Hello" is a heck of a song to follow up, particularly as it's inspired so much fan reaction in the form of gifs, videos, and hilarious mash-ups.

The track list for 25 reveals so many potential single titles. Fingers crossed that Saturday Night Live will give us the greatest gift of all in the form of Adele performing her follow-up to "Hello". The wait continues.