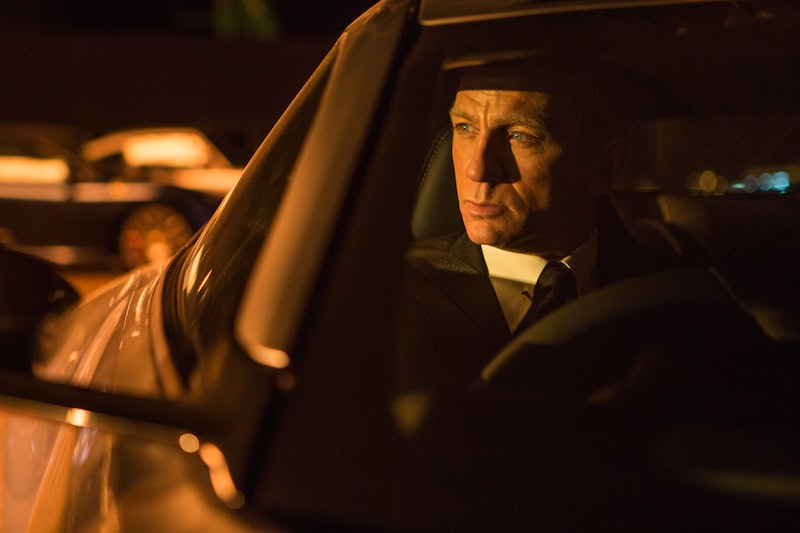 James Bond is one of the most iconic pop culture figures in movies. He's graced audiences with his dapper style and titillating spy action since the 1960s, and Spectre will be the 24th iteration of the charming, skilled, and, let's be honest, wildly promiscuous spy. Beyond that, Bond continues to thrive in Ian Fleming's novels. As an idea and a fixture in culture, 007's presence is alive and well, but in the latest movie, there are hints that will make the audience ask if it's all coming to an end. Did James Bond really quit in Spectre ? Until the next film comes out, it's hard to say — but it's definitely got viewers wondering.

Spoilers ahead! Throughout the movie, there are strong inclinations that Spectre is Bond's (Daniel Craig) final hurrah. At the very end, after literally walking away from the action, he revisits Q (Ben Whishaw) to pick up his classic Aston Martin and drives off with his new gal pal, Madeleine Swann (Lea Seydoux). And that's it. There is no straight answer on whether or not he'll be back, but there is an overall feeling that Bond is ready to retire. He's still at the top of his game when it comes to kicking ass, but his heart is saying, "I'm getting too old for this." You get a sense that he just wants to settle down with a girlfriend and perhaps do something more low key — like manage his own vineyard. Even so, the character of Bond never officially "quits."

Daniel Craig, though, might be a different story. Whether he was joking or not, Craig has given the world the impression that he isn't dying to play Bond in future movies, thanks to an interview he did with Time Out. "I’d rather break this glass and slash my wrists," Craig said after being asked about playing Bond again. "No, not at the moment. Not at all. That’s fine. I’m over it at the moment. We’re done. All I want to do is move on."

Still, even if Craig is out of the picture, it's unlikely his character has left, too. In Spectre, viewers meet Ernst Stavro Blofeld (Christoph Waltz), the number one Bond villain of all time. At first, he calls himself Franz Oberhauser, the son of the man who helped raise 007 after his parents died. Bond thought that Oberhauser died with his father in an accident a long time ago, so it is a shock to see him alive and well — but more of a shock when he reveals that he is Ernst and has been playing puppeteer to Bond's life for the past three movies. Because it's Ernst before he becomes the iconic bald, face scarred villain petting a furry cat (the trademark of the character and the template of the parody character Dr. Evil in Austin Powers), this Bond movie, like the three before it, is a prequel to his true rivalry with Bond, so it'd appear to mean that Bond is far from quitting. Even though he drives off in the end with a smile on his face and his lady by his side, the world knows that Bond can't resist the life of a spy hero off to face another mission. It just might mean that Craig could possibly not be filling those shoes.

Check out the video below to see Bustle's Kelsea Stahler speak with Spectre's Lea Seydoux and Monica Bellucci about the Bond franchise: