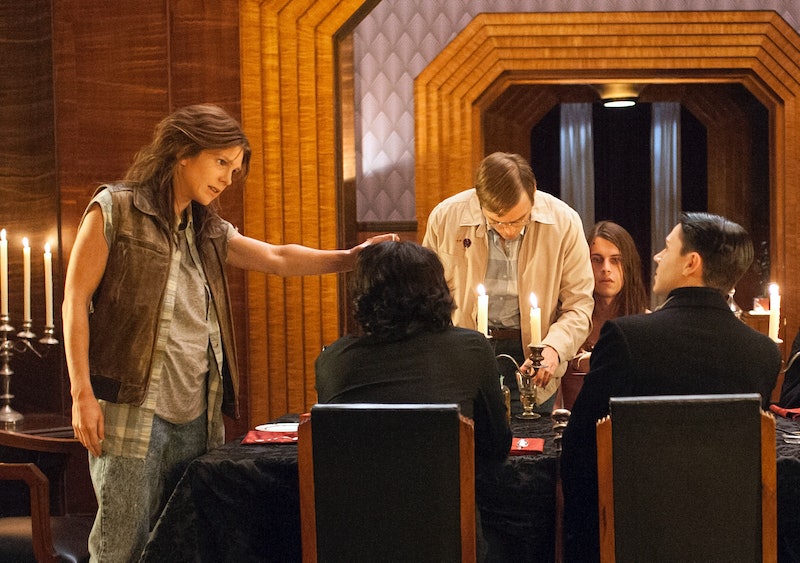 After last weeks' festive guess-who's-coming-to-dinner-type episode, it got me thinking that maybe Ryan Murphy should enlist some more notorious dinner guests in upcoming episodes. In case you missed the creepy Halloween episode of American Horror Story: Hotel, let me remind you of what went down. Some of the United States' most famous serial killers came to dinner for the annual Devil’s Night Soiree. Guests included the infamous Jeffrey Dahmer, Aileen Wuornos, John Wayne Gacy, the masked Zodiac Killer, and Richard Ramirez. Detective John Lowe got a mysterious invite to the party from James March, who hosts the shindig each year and creepy stuff ensued (as you can probably imagine). Although it’s pretty clear that what we saw was real, Sally convinces that John had been hallucinating the entire event. Whatever, it was still weird and scary. It was basically a party of people you would never ever want to come in contact with.

In keeping with the serial killer vibe on the show last episode — and since Ryan Murphy pretty much likes to take things as far as he can go — I've come up with a list of other notorious serial killers that weren’t present in the last episode and should be included on the roster of faces we see in the hotel.

For the record, if these people were to come in I would like to see them treated like the horrible human beings they were. Maybe someone could murder them?

Ted Bundy confessed to over 30 murders of college-aged women, although some said that he may have killed around 100 women. He grew up in a normal family, graduated from college, and no one suspected that he was a murderer. He ending his killing rampage in Florida at the Chi Omega sorority house at Florida State University and, after being caught, was sentenced to death and electrocuted in 1989.

So while I was casually browsing around for serial killers today, I learned that in order to be considered a “serial killer,” you have to have killed more than two people. Fun fact. So, no, Lizzie Borden is not a serial killer. In fact, she was acquitted of the deaths of her father and stepmother, but Lizzie Borden’s story is so fascinating that I included her on here. Plus, the whole jump rope chant: “Lizzie Borden took an axe and gave her mother 40 whacks. When she saw what she had done, she gave her father 41” is terrifying. It could probably be an interesting add to the show.

Also known as "The Angel Of Death," Josef Mengele is responsible for thousands of children’s deaths during World War II. He was a doctor at Auschwitz where he performed medical experiments on the kids (mainly twins), resulting in many, many deaths. He was also famous for choosing which people would die in the gas chambers. After the war he fled the country. His remains were found in a falsely marked grave in Brazil decades later. If anyone deserves to die on AHS, it's him.

Known as one of England’s most infamous murderers, Jack the Ripper is thought to have killed at least five prostitutes in London’s East End in 1888. The murderer was never caught, and according to Biography.com, more than 100 suspects had been named during the investigation. A book was recently released that claims the murderer's name was Francis Spurzheim Craig and his wife, Mary Jane Kelly, was one of his victims. It has yet to be confirmed if this theory is true.

Is there a better way to bring the AHS seasons together then bringing Delphine LaLaurie back? You may remember her from Coven. Kathy Bates played the murderer who was famous for torturing slaves in New Orleans in the 1800s. The torture chamber — as most AHS fans know — was found in her attic. Maybe Kathy Bates could have a duel role, after all she is immortal now… or maybe she always was.

Also known as the “Boogeyman,” Albert Fish was a cannibal who would kidnap and eat children. While it is unknown how many people he killed, he confessed to three murders, and the stabbings of two others. He was electrocuted in 1936.

Although he’s described as a serial killer, he’s only confessed to killing two women, which like I said earlier, means he’s not a serial killer per se, but deserves to be on this list. Ed Gein is the inspiration behind characters like Norman Bates, Jame Gumb (Buffalo Bill), and Leatherface. He’s also said to be the inspiration for Bloody Face from season 2 of American Horror Story (bring back Zachary Quinto!). He would rob graves and take body parts as trophies and practiced human taxidermy. What do I mean by that? He would make furniture out of human skin. He admitted to the murders of two women and was found guilty, but legally insane. He served life in an insane asylum before passing away in 1984.

It's disturbing that AHS: Hotel included five deadly serial killers, and yet that only barely brushed the pool of horrific people out there. But, if there's any place for a killer to get their just desserts, it's on AHS.