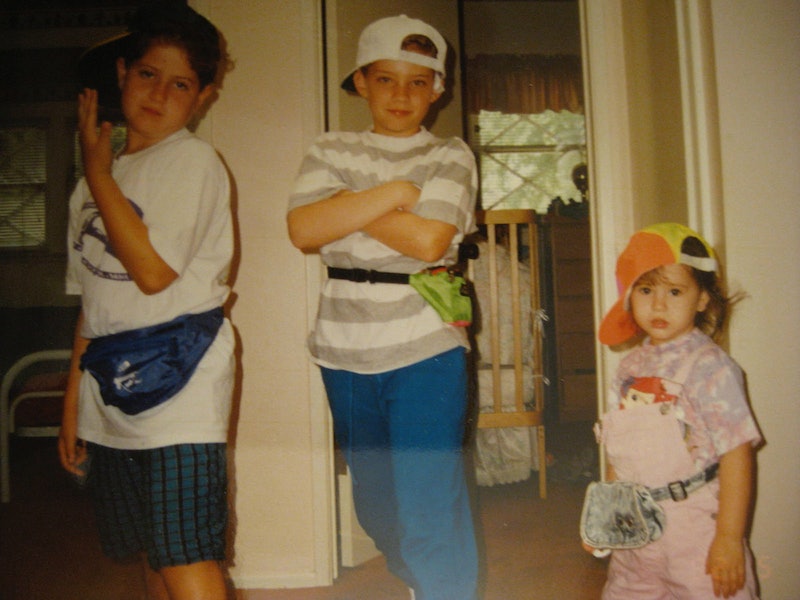 Slang comes and goes. Sometimes it comes back again later on — but as these '90s slang words that no one uses anymore demonstrate, sometimes when it goes, it's gone. For good. Or at least, for several decades. Let's face it: Dated slang is kind of like the forgotten clothing hiding at the back of your closet — once it's been out of sight for a while, you can't even remember when or where you first encountered it anymore. Or whether it's worth unearthing.

Personally, I'm also of the opinion that these particular words and phrases should stay buried. While there are plenty of '90s buzzwords that might be kind of fun to bring back, plenty of others just haven't aged well. It might be because their linguistic moment has passed. It might be because the pop culture reference from which it hails is no longer cool. Heck, it might even be because we suddenly discovered that we had been saying some really offensive things without even realizing it. Whatever the reason, there's something to be said for bowing out when it's your time and enjoying a nice, quiet retirement.

I hope these words are enjoying a long and relaxing rest. Because I don't want to hear them coming out of anyone's mouth ever again. Ever.

I was unaware of this until now, but in some circles, “phat” is believed to be an acronym which stands for “pretty hot and tempting.” And here I was, just thinking it was a nonsense word that someone arbitrarily decided meant “cool” one day.

English Language & Usage Stack Exchange traces the use of “the bomb” to mean that something is exceptionally cool all the way back to the jazz scene of the '40s and '50s. It's unclear why it resurfaced during the '90s, but eh. Whatever. Things come and go and come around again with some regularity, so perhaps it's to be expected.

Definition: Yet another adjective meaning “cool.”

I find it somewhat curious that there are always so many words that mean “cool” floating around in our cultural lexicon. It's almost like finding the next cool word to use to mean “cool” is, in itself, a measure of coolness. Or … something.

In any event, “dope” is definitely not cool anymore.

Definition: One's place of residence. This panda is not impressed with his.

It was popularized by MTV's Cribs. Some sources actually trace this usage of the word back to the 1960s.

I'll be honest, I'm still not convinced this one was actually a hip and widely used term — largely because I have never once heard anyone use it in real life. Then again, it's always possible that I just didn't roll with the right crowds then, so do with that what you will.

6. The Unnecessary Addition of “-Iz”

As seen in “shiznit,” “biznitch,” and so on. Functionally, the insertion of “-iz” into the middle of a word turned a swear into a minced oath. These days, you're more likely to encounter "-izzle."

Definition: An expression of encouragement.

You might still hear this one used ironically, but it's mostly been supplanted by the ever-popular Mean Girls quote, “You go, Glen Coco!”

Like “cheddar,” I have never once heard anyone refer to their friends as their home skillets. I have, however, heard the variation “homeslice,” so at least there's that. “Home skillet” was apparently used on That's So Raven in the early 2000s, although I'm not actually sure if this was the context then. Alas, I had grown out of the Disney original programming demographic by that point.

Definition: Someone who thinks they're significantly cooler than they are; a ne'er-do-well.

We may not call them scrubs anymore, but we definitely know that we don't want them. Slang is fleeting, but not dating terrible people is forever.

Defintion: F*cking ugly. Yep, it's both a portmanteau and an adjective.

To be fair, I think “fugly” was actually more popular in the early '00s than it was in the '90s. Furthermore, it's still around in at least one form — namely, the wonderful and magnificent Fug Girls. But hey, fun fact: According to the Oxford English Dictionaries, it actually dates back to the 1970s. For reals. Who knew, right?

More like this
Netflix Reveals First Look At Wednesday In The 'Addams Family' Spinoff Series
By Bustle Editors
Kenan & Kel Just Reunited At The 2022 Emmys & Twitter Is Overjoyed
By Grace Wehniainen
15 Offensive AF Jokes In 'Friends' That Really Aren't OK
By Tolly Wright, Bustle Editors and Meguire Hennes
3 Zodiac Signs Most Likely To Be The Center Of Attention
By Nina Kahn
Get Even More From Bustle — Sign Up For The Newsletter