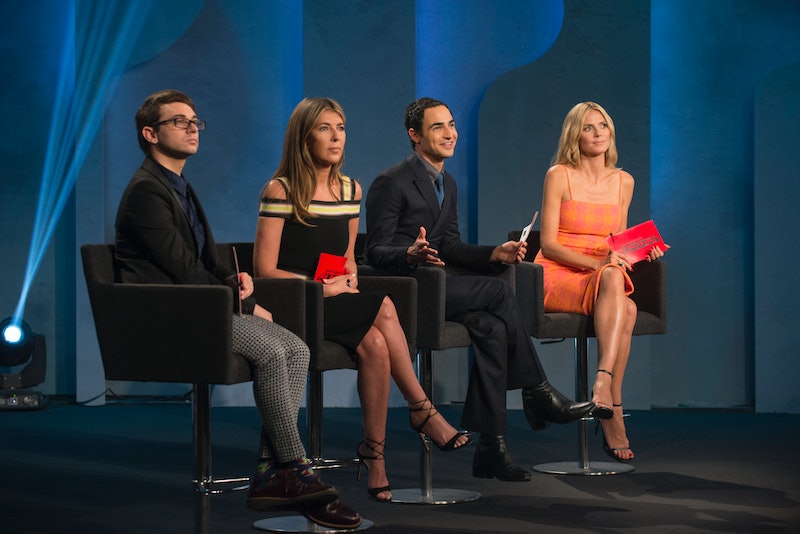 If your invitation to New York Fashion Week got lost in the mail, don't fret — we'll all have a front row seat to one of the fashion shows when the Project Runway finale airs on Nov. 5. This season, four designers made it to the finale rather than the standard three, because Tim Gunn wisely used his save to reverse Edmond's elimination. The final four are all amazing designers, but I'm #TeamAshley this season because she's insanely talented and it's high time that a plus size designer brought home the ultimate prize. Although I can't wait to watch the finale, I'm already anticipating the upcoming void in my Thursday nights. I've just really come to count on hearing Tim Gunn tell the contestants to "make it work" every week, you know? So, when is Project Runway Season 15?

No premiere date has been set, but we probably have a long wait. Although the show has occasionally aired two seasons in one year, the more recent pattern has been one season per year — and they've typically premiered in July. We're probably looking at a premiere date sometime in July 2016 and there may be some changes to the show. Tim Gunn recently admitted to Entertainment Weekly that he wasn't a fan of Season 14 because he felt many of the designers lacked motivation and drive. This was the first time he missed auditions, and it sounds like he won't let that happen again. In the same interview, Gunn also expressed that competition among the judges had a negative affect on the season.

I actually enjoyed seeing some respectful dissent between the judges this season, because I've always wondered why they seemed to agree on everything in the past. I know they're experts and all, but isn't fashion still somewhat subjective? But, I thought Season 14's roster of guest judges had room for improvement. In the past, there's been a mix of stylish celebrities and fashion designers — but this season, nearly all the guest judges were actresses and entertainers. Although they certainly know more about fashion than I ever will, fashion designers tend to have deeper, more specific feedback since they work in the field.

Here are six people I would like to see as guest judges in Season 15:

OK, so what I really want is for Kors to return full-time — but since that's not gonna happen, the least he could do is make a guest appearance. No one else can effortlessly deliver one-liners like "She looks like an Amish cocktail waitress" and "It's a tight race for hideous tonight" the way Kors could.

The Spice Girls made her a household name, but Beckham has since established herself as a highly-respected fashion designer. When Nina Garcia appeared on Fashionably Late with Rachel Zoe, she named Beckham as the best guest judge in Project Runway history due to her extreme diligence and her desire to learn all about the contestants prior to the runway show.

Osbourne will be a full-time judge on Lifetime's upcoming Project Runway Junior, so she'll basically be an expert by the time Season 15 kicks off. Plus, she bluntly called out a group of female contestants who ganged up on Ashley this season — so I think she should be welcome back any time she pleases.

Although she's best known for her boho chic clothing, Burch is an incredibly versatile designer who most recently branched out into sportswear. The breadth of her work means she would be an amazing judge regardless of the week's challenge.

Like Burch, Spade is a versatile designer and an expert at branding her designs in a way that's both classy and subtle.

There's no celebrity whose style I covet more than Bilson's. Whether she's walking a red carpet or caught in a candid photo while going about her daily life, Bilson always looks effortlessly amazing. She's also dabbled in fashion design and served as a columnist for InStyle, so she'd definitely be able to offer some expert critiques.

The Season 15 guest judges probably won't be announced for quite some time, but hopefully the roster will include a diverse mix of designers and chic celebrities.