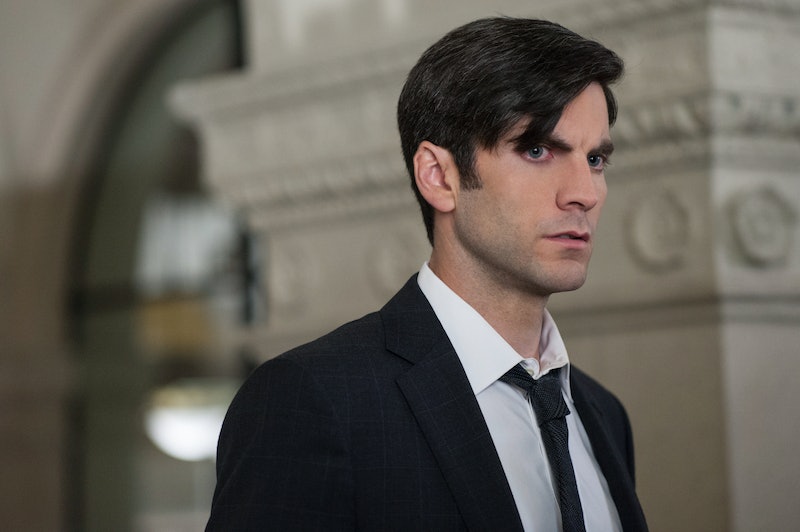 In true American Horror Story: Hotel fashion, our poor detective seems to be slowly losing his grip on reality since he has been spending time living at the Hotel Cortez. So, what's wrong with John Lowe on AHS: Hotel? One thing that has started increasingly happening to him is that he will wake up with complete and total memory loss. His blackouts are becoming frequent enough that I think John Lowe could be the 10 Commandments Killer.

Hear me out. It's possible. He seems to be falling slowly into psychosis which would put him in the perfect place to commit the brutal crimes attributed to the elusive serial killer on the loose. Why else would he be invited to the Devil's Night dinner? That event was normally only open to the most vicious (and dead) serial killers in America that all served under the tutelage of the psychotic, Mr. March. During the festivities March even says that John "isn't one of us, yet." To me, that says that he is on his way to being something awful and Mr. March wants to guide him.

This episode had him trying to explain to his police chief what the hell he did that night. When he claimed he had dinner with some major serial killers, the chief made a snide remark about how he shouldn't have signed off on John's mental evaluation years ago. Whoa. So, John could be mentally imbalanced and there may actually be clinical evidence to back that up. He also can't seem to figure out whether he was actually at the dinner or if he was drugged. Again, a blackout and a gap in his memory. Maybe this is why he always has such keen insight into the crime scenes of the 10 Commandments Killer. He could be committing them without remembering.

When the episode closed with him waking up in bed with Sally, completely unaware of how he got there or what had happened, I was convinced. He is blacking out for a reason. Something is happening in the interim of his flows of consciousness. I don't think it's anything savory, either. Sorry John Lowe, but I think you're suspect #1 in this case.