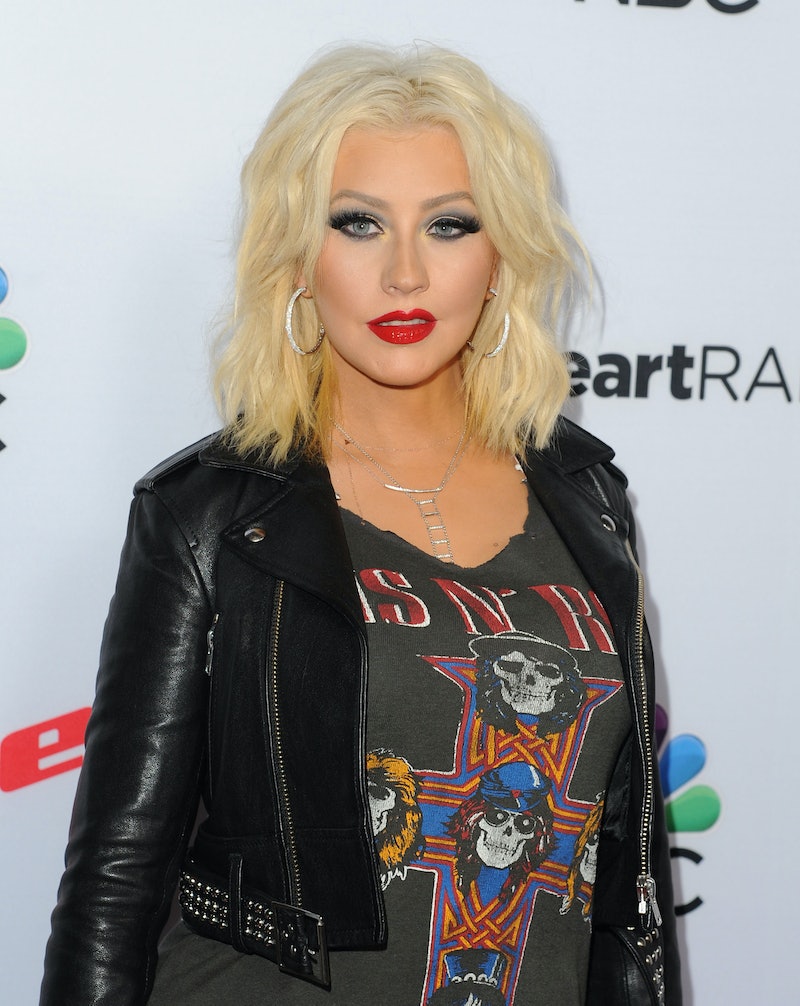 As the 2016 presidential race begins to heat up, celebrities are starting to show their support for various candidates. Recently, Katy Perry performed at Hillary Clinton's Iowa rally and even gave Clinton a "POTUS" necklace as a gift. Now another female singer is standing up for the presidential hopeful. On Wednesday night, Christina Aguilera hosted a fundraiser for Hillary Clinton at her home in Beverly Hills with fiancé Matthew Rutler. Celebrities like Katie Holmes, Christina Milian, and Matthew Bellamy from Muse were in attendance. Overall, the event was a success, raising more than $1 million for Clinton's campaign, according to the Hollywood Reporter.

So what exactly happened when Xtina met up with Hillz? Aguilera took the stage and covered "Say Something" with A Great Big World. She also sang her ballad "Beautiful." Plus, Clinton told the crowd that she's inspired by the song "Fighter," which is fitting since Clinton definitely live up to the song's name. Clinton reportedly told attendees that she plans to fight for "everyday Americans" if elected.

TMZ got their hands on a video of the "Say Something" performance, which gives me serious FOMO. I also wish that Aguilera and Clinton sang a "Genie in a Bottle" duet. Could you imagine?! That would be the stuff dreams are made of.

It's awesome to see fierce female singers like Aguilera and Perry showing their support for another strong woman. Back in 2012, Aguilera talked about Clinton on The Ellen DeGeneres Show , saying, "She's such a force in a room. She's got that star charisma and everything about her. I couldn't take my eyes off her."

In the spirit of these ladies teaming up, here's a round-up of vintage Christina Aguilera songs that would make great campaign anthems for Clinton.

When you need a strong woman in office, you can turn to Hillary Clinton. (Yeah, that's not quite what the song is about, but let's use our imaginations.)

"Can't Hold Us Down"

With lyrics like "When a female fires back / Suddenly big talker don't know how to act," this could easily be Hillz's anthem. The Republicans can't hold her down.

If Clinton endorsed this song herself, then you know it's appropriate. Clinton is certainly a fighter.

This song could double as a message to all the young girls who look up to Clinton, telling them to look inside themselves for inspiration and stay strong.

No matter what, words can't bring Clinton down. She's proven this time and time again as she's bounced back from insults and other criticism.

"What A Girl Wants"

The perfect response to this song's title? A girl wants equal rights — whether that's closing the wage gap or control over her own reproduction decisions. Simple as that.