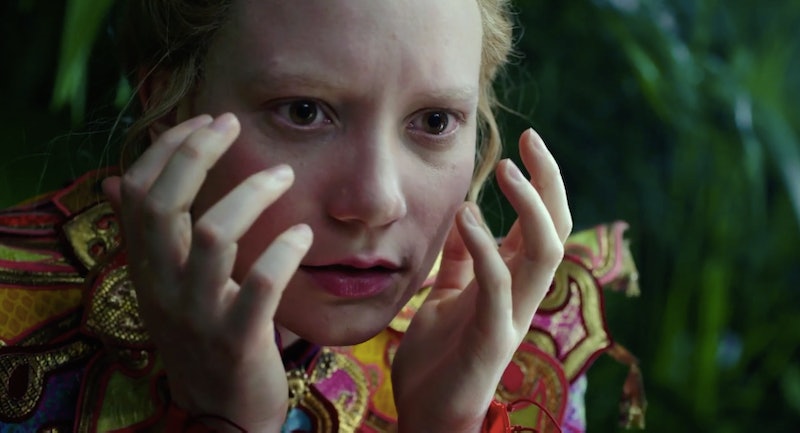 On Thursday, the first major trailer for Through The Looking Glass hit the Internet in a beautiful, brightly-colored verse, getting us all psyched for second Alice adventure. The Tim Burton-produced (but not directed) sequel has Alice making another visit in Wonderland/Underland, a returning savior going against new villain Time (played by Sasha Baron Cohen). And, since it borrows it's name from the actual sequel to Alice's Adventures In Wonderland, you have to wonder — how close will Through The Looking Glass be to the original book?

Well, there are two answers to that question. The first is, "there's no way to be completely certain until the movie comes out," and the second is, "not very." Why do I say that? It's primarily a matter of Time: he's a brand new character and not really in the book, whereas in the movie he seems to be the primary antagonist. That alone is going throw of the entire plot. Not to mention, the story seems to revolve around saving The Mad Hatter, who basically plays a role as Alice's ride-or-die BFF in these films. Except... the Mad Hatter really isn't in Through The Looking Glass. A character named Hatta resembles him in the original Sir John Tenniel illustrations, and that's as close as it gets to a cameo.

So, you know, I just feel like this is going to take us down a whole new rabbit hole.

Which isn't a bad thing, necessarily, and really it's to be expected. Burton's first romp with Alice In Wonderland was a very different story than the Lewis Carroll's novel, Alice's Adventure's In Wonderland. That movie focused on a grown-up Alice's return to Wonderland (or Underland, as the movie formally names it), having visited as a child in a manner that probably mimicked the original story. In short, we're already dealing with a separate Alice and a separate canon, so to speak.

That said, there are three elements from the book that may translate to the screen in some way. Without getting into spoiler territory, they are...

The Dynamic Between The Red Queen And The White Queen

The Red Queen in these films serves as a mash-up between the Looking Glass character of the same name and The Queen of Hearts. The White Queen, however, seems to be an original concoction not seen in Alice's Adventures In Wonderland... however, she IS a character in Through The Looking Glass. The book pit the respective queens against one another, and we already know these two have beef, so I'm intrigued to see how this will play out.

The Importance Of Chess

Alice's entire adventure in the Through The Looking Glass book is mapped out akin to a game of chess, and becoming queen i.e. "winning" that game is the key to her way back home. In fact, the entire land is basically just a giant chess board. Now, I sincerely doubt this is how it'll play out in the film (they seem to be sticking with time metaphors versus a literal land of chess), but it's definitely a part of the film. I feel like it's gonna serve as the penultimate catalyst to the final showdown. Which is very Harry Potter and the Sorcerer's Stone, TBH.

A Looking Glass That She's Going Through

Of course, no one will really know what to expect with this new film until it comes out. I, for one, am excited to check see what's on the other side of the mirror when it hits theaters May 27, 2016!