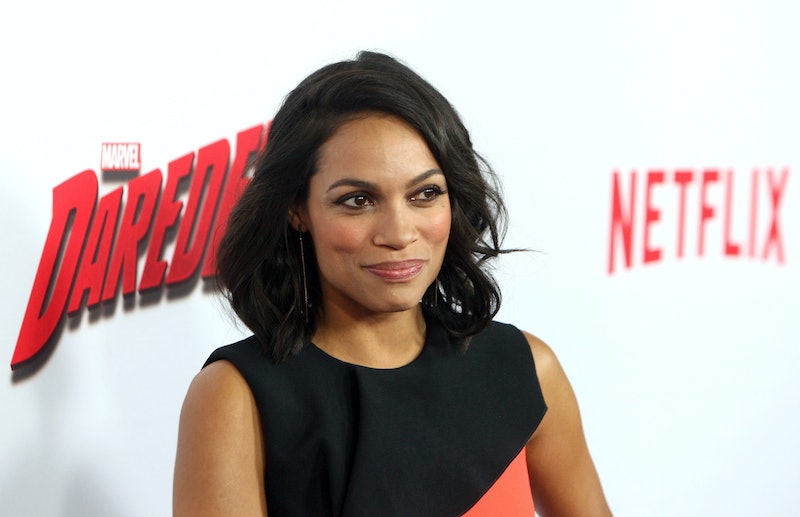 Ever since she was a little kid, Rosario Dawson has loved playing video games. Even back in the Nintendo era, when her mom would come home, unplug the system, and she'd have to start all over again. "Kids have it so good these days. They don't understand," she jokingly tells Bustle via phone. But she's right — games have changed a lot over the years and, as an avid gamer, Dawson witnessed that progress firsthand. A major step forward? Call of Duty: Black Ops 3, which is the first in the series to feature a playable female lead character. Dawson teamed up with Amazon Prime and Activision to promote the new game and hand-deliver it to a few unsuspecting customers. "We just surprised this guy at his work and it was a moment," she recalls. "This is my passion. I’ve read comic books since I was little and I’ve played video games since I was young, and it’s really great to see it be embraced in this way. Like a grown man ordering a video game, showing up at his work, and everybody cheering."

Of the new game's inclusion of a playable lead character, Dawson says, "Call of Duty has never done this before. You can play as a female in every mode, even a zombie mode." The Daredevil actress believes women deserve to see themselves represented: "There are so many female gamers out there and they have a right to be able to play in every single mode of a game that they love and be badass just as themselves, as a female." And it's not just the ladies who benefit from this change. Dawson adds, "I know a lot of men who like playing as characters that are female." With a variety to choose from, each character has its own strengths and weaknesses, which provides a more enriching gaming experience where users can try out all of the different options.

As for the increase in female characters, the 36-year-old thinks it's a direct result of people speaking up. "To have the variety of characters and diversity of characters that are available now, it’s from gamers and the audience's demand," she says. "They’re listening and making awesome games for us."

While this is certainly a step in the right direction, when asked whether she thinks women get enough representation in the gaming community, Dawson says, "In general, women don’t get enough representation in the world. Considering we’re the majority sex of the planet, it doesn’t really make sense. But often the pendulum swings back and forth. There’s been better moments and [less] great moments," she explains. "I think we’re in a remarkable, amazing moment where it’s taking [progress] to a whole other level and actually pushing the needle forward in a way that is lasting and being built upon."

Describing this positive momentum, Dawson touches on how games are finally becoming more inclusive and making women part of the entire experience:

There are women who are not just being thought about as roles to play or gamers, but actually making great games and influencing how the games are being developed. People are realizing, "Duh, women are a huge consumer base." By not playing to something that [women] want and need, they’re losing out on a lot actually. It’s not smart business. I think people really wanted to make up for that, and it’s going to develop even more so.

Dawson believes games still need more women behind the scenes writing, creating, and developing. But featuring female characters and having women do voice work is equally important. Heather Graham plays one of the voices in Call of Duty: Black Ops 3, and Dawson has voiced characters in a few games herself and would like to do more in the future.

As for her ultimate gaming aspiration, the actress hopes to turn her comic book O.C.T. ( Occult Crimes Taskforce ) into a video game. "That's my dream. That’s one of my absolute bucket list goals," she says. "One day O.C.T. will be a game and Sophia Ortiz will be a character you can play and I’m very excited about that possibility."