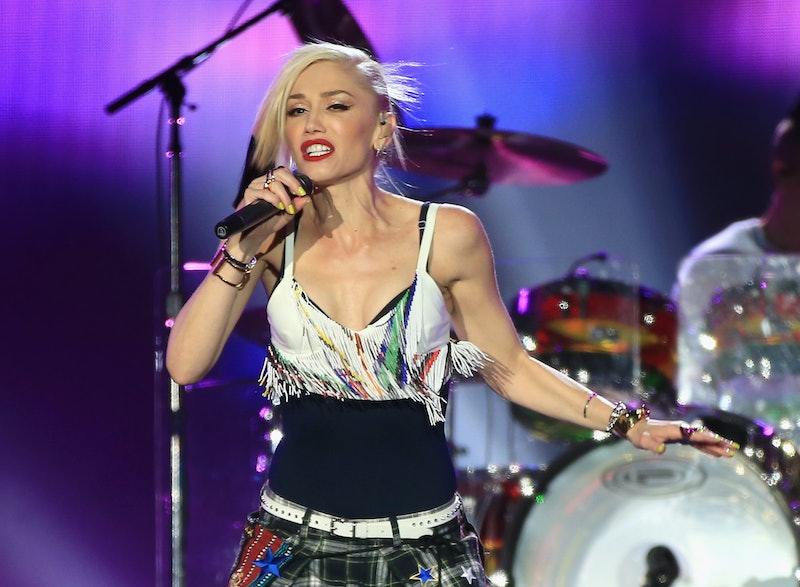 There's no doubt about it: the Voice judges are definitely a couple. On Wednesday, after officially confirming their relationship, Gwen Stefani and Blake Shelton were spotted holding hands after the 49th annual Country Music Association Awards in Nashville, Tenn. Entertainment Tonight released a photo of the two walking hand-in-hand while they strolled between the VIP and main areas of the Warner Music Group CMA after-party. As you can see below, it sure looks like they have a firm grasp on each other's hands, just like they do on their beverages. However, just because they are no longer hiding behind closed doors doesn't mean Shelton and Stefani are really taking their relationship public.

Yes, Stefani's rep told Us Weekly, "Blake and Gwen are longtime friends who have very recently started dating," and now they are being open about it, like with the hand holding, but that doesn't necessarily mean they're going to start talking about it in interviews. Besides Stefani's rep commenting on the two dating, neither the former singer of No Doubt nor the country singer have commented themselves. They've both played very coy about things, which may or may not have to do with the two both going through divorces at the same time. Stefani filed for divorce from Gavin Rossdale in August after 13 years of marriage. As for Shelton, he and Miranda Lambert split after four years together in July.

Or maybe they just want to keep their relationship private and out of the spotlight of the media. I mean, it can't be easy dating in Hollywood, especially when you're two extremely famous individuals who are both going through very public divorces. Seeing as they're in the early stages of dating, maybe they want to keep things close to their chests, which makes complete sense.

So, just because their dating situation has been confirmed and they're now holding hands for the cameras to capture doesn't mean Stefani and Blake will be letting the public eye into their relationship. Basically, I wouldn't hold my breath if you're hoping to learn all the juicy details about their relationship straight from the mouths of these two singers.

With that said, there is a chance fans will learn more about these two when they release the country song they're reportedly writing together. Music and lyrics are always a great way to learn about a relationship.