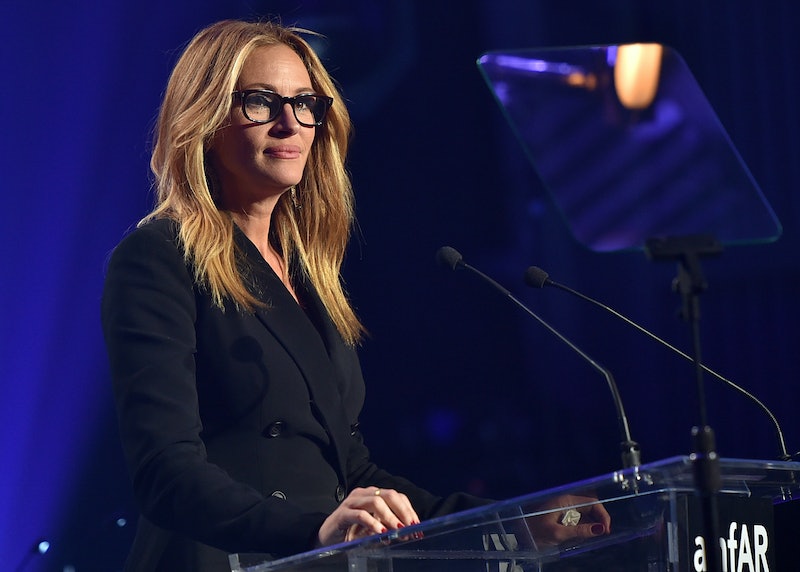 I talk a lot about all the ways that women are still being held back in the entertainment industry, so stories like how Julia Roberts' role in Secret In Their Eyes was supposed to be played by a man are my lifeblood. Especially since, in this case, the character was supposed to be played by not one man but two men. Yes, feed me those sweet feminist nutrients, Hollywood, feed me! Secret In Their Eyes, which comes out on Nov. 20, is an American adaptation of an Argentinian movie of the same name just with an added "The" — the title in Spanish is El secreto de sus ojos — that won the Oscar for Best Foreign Language Film in 2009.

In that original version, the unsolved crime at the heart of the story was the murder of a woman named Liliana Coloto, which her husband was still haunted by every day. But, in the reboot, the victim is a child, and the person whose life is upended by the murder is the mother, played by Julia Roberts. A tweak which, as it turns out, was partially inspired by Roberts herself, according to what she told reporters during the film's press day on Nov. 5.

I said to Billy, 'If it's a woman, can she lose her child?' Because we all have one or we've been one. So everybody is therefore connected to her grief in some way. I felt that was a really important aspect.

But, aside from that one adjustment to make the plot more accessible to everyone, not just women, Roberts says there isn't much challenge to playing a character that was originally written as a man. In fact, she gets offers to do it all the time.

I've read a number of scripts over the years that get sent and say 'Well the part is man now, but if you want to do it, we'll change it into a woman'. [...] Of all the ones that have been offered, none have really kind of spoke [sic] to me or interested me at that time. This was something that did.

Just in case you missed that, Roberts said a really important thing back there — she didn't take this role solely because it was written for a man and she wanted to snatch it away from a qualified guy. (Although she does joke, "It takes two men to make one me.") Instead, she accepted it because she was drawn to the character itself, regardless of the gender. That's really important, and I feel like it's something we should all be aiming for in this fight for equality. It isn't about women playing men's roles; it's about women getting the opportunity to take on a range of characters that, up until now, has been largely denied to them. It's about women being the stars of action franchises, taking on the label of antihero, opening blockbusters, passing the damn Bechdel test. Let's do it.

What we're after here is true equality, and I can't tell you how refreshing I find it to see that we're taking steps in that direction with Sandra Bullock in Our Brand Is Crisis , Charlize Theron in The Gray Man, Angelina Jolie Pitt at the helm of By The Sea , and Julia Roberts shouldering the part of two men in Secret In Their Eyes.