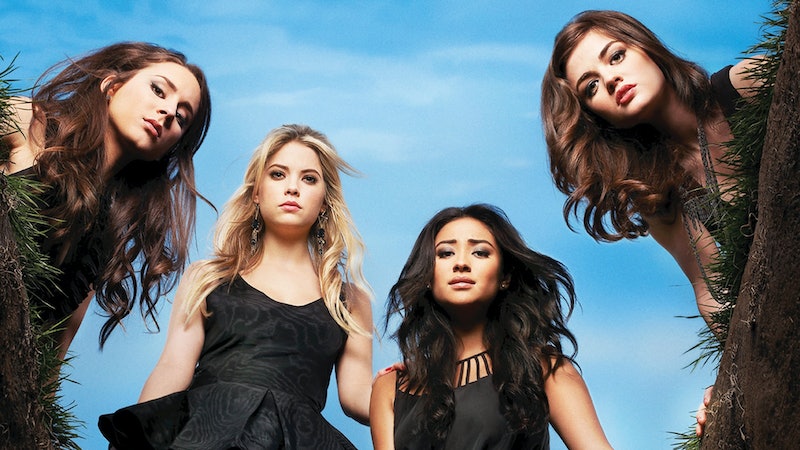 Ugh, being patient sucks sometimes, especially when you're a Pretty Little Liars fan. First, we had to wait five years to finally find out who the real A was, and then, even though nothing compares to that lengthy wait, the time we're spending now anticipating the Pretty Little Liars Season 6B premiere in January 2016 is just as brutal. What are we PLL fans supposed to do in the meantime to keep ourselves preoccupied?

Unfortunately, time travel is out of the question. Alas, life is not DVR, so we cannot fast forward through the next two months and arrive on Jan. 12. Believe me, if I knew a way that we could do it, I would so be down. But since all of the nonconventional options are out of the question, what else can fans do to help us have some sort of peace of mind while we wait for the show to premiere?

It's hard to distract oneself from PLL when we keep getting bursts of excitement and anxiety every time ABC Family spills some juice about the upcoming time jump. Or the biggest burn: when they released a brand new trailer for the new season. How could you not watch that?! Featuring our four favorite liars all grown up and starting a new chapter in their lives, the trailer brings up a lot of new questions about the upcoming episodes, and it makes the wait even harder.

While ABC Family might not be doing much to help ease the pain, I am here to help. Below, a few things that'll assist fans while we patiently wait (yeah, right) for Season 6B to hit.

Netflix Binge With No Chill

Chances are, if you distract yourself with the other 130 episodes of Pretty Little Liars, it'll take up some of the time that you could spend whining and pining for new episodes. So do it! With that many episodes, there is no way that you remember every clue and every mishap that has taken place in the past five years, so give a re-watch a try. You won't be sorry.

Before some of Rosewood's finest were stirring up trouble in the neighborhood, you could find a few of these actresses on the big screen. Ashley Benson traded a red coat for a cheer uniform in Bring It On: In It to Win It, and Lucy Hale showed her Greek side in Sorority Wars, among others.

Yes, I am aware that this leaves room for many wasted hours and probably a ton of unnecessary spoilers mixed in with straight up lies, but it's funny to see what others think will happen when PLL comes back.

While some might argue that this isn't the best idea, since the books and the TV show have several striking differences, I don't see the harm in it if you've already watched the whole series up until now. The books are just as good, if not better, than the show, and since you've already seen the characters come to life on screen, it could be fun to read about them.

Sara Shepard's second most popular series, The Lying Game was brought to life by ABC Family a few years after Pretty Little Liars first premiered, in hopes of it having similar success. Sadly, the show was cancelled after its first season, and it ended on a massive cliffhanger. Still, it's worth the watch. You can find it on Netflix, and it might help fill the PLL void with its interesting mysteries and twisted story lines.

MTV's teen drama is popular and acclaimed for a reason. Packed with a gorgeous cast, wild story lines, and plenty of thrills, confusion, and mystery, it has everything that PLL has. Season 2B is currently airing on MTV, and you won't regret it if you tune in.

When in doubt, nap it out. There's nothing that you can lose from taking a shut-eye, and at least your mind won't be on the show. It's a win-win situation, if you ask me.

I hope that I could be of some help on your journey to Season 6B. Obviously, the best remedy is just for the season to start already, or at least for Jan. 12 to come very quickly. But since that's unlikely, utilize the list above to the best of your ability.