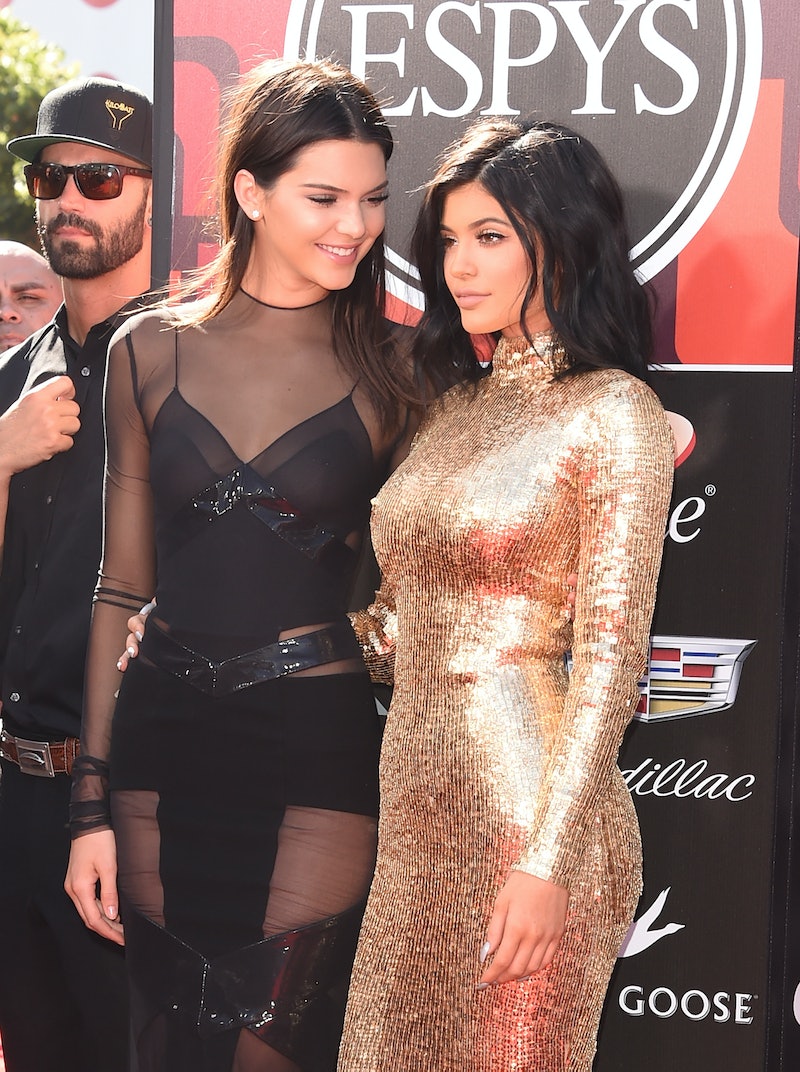 If you've ever wondered what it'd be like to see F. Scott Fitzgerald's novel come to life, look no further than Kris Jenner's Great Gatsby themed party. On Friday night, the Keeping Up With the Kardashians matriarch celebrated her 60th birthday with an extravagant '20s themed bash. The invitations promised "champagne flowing" and lots of dancing, and if Instagram is any indication, the party did not disappoint. All of the Kardashian/Jenner kids were there, along with Ryan Seacrest, John Legend, Chrissy Teigen, and more. While all eyes were on Kris Jenner on Friday (as they should have been), the next day was a different story; on Saturday, Kendall and Kylie Jenner had a family night with Caitlyn Jenner, as shown through Instagram. It looks like the sisters wanted to make sure both parents got equal amounts of love this weekend.

On her Instagram, Kylie shared a photo of herself, Kendall, and Caitlyn hanging out. They're all smiling (sans teeth) and looking cozy. While Caitlyn is as glamorous as ever, Kendall and Kylie opted for minimal make-up. All in all, they look happy to be spending time together, which really is what's most important. I think it's super sweet that on a weekend that was so focused so much on one parent, they made sure to not leave the other out. That's really admirable.

From the looks of it, Caitlyn Jenner wasn't in attendance at Kris Jenner's big party. But she did make a cameo in some capacity, appearing in the birthday tribute video made by the Kardashian/Jenner kids — bubble bath and all. I'd say that definitely makes up for not being there in person, don't you think?

While I can't even begin to imagine what it's like to be part of the Kardashian-Jenner clan, it's bound to have been a tough road as they've adapted to their new normal, ever since Caitlyn Jenner's transition. But no matter what, they seem to put family first, and at the end of the day, that's all they can do. I really respect them for that.