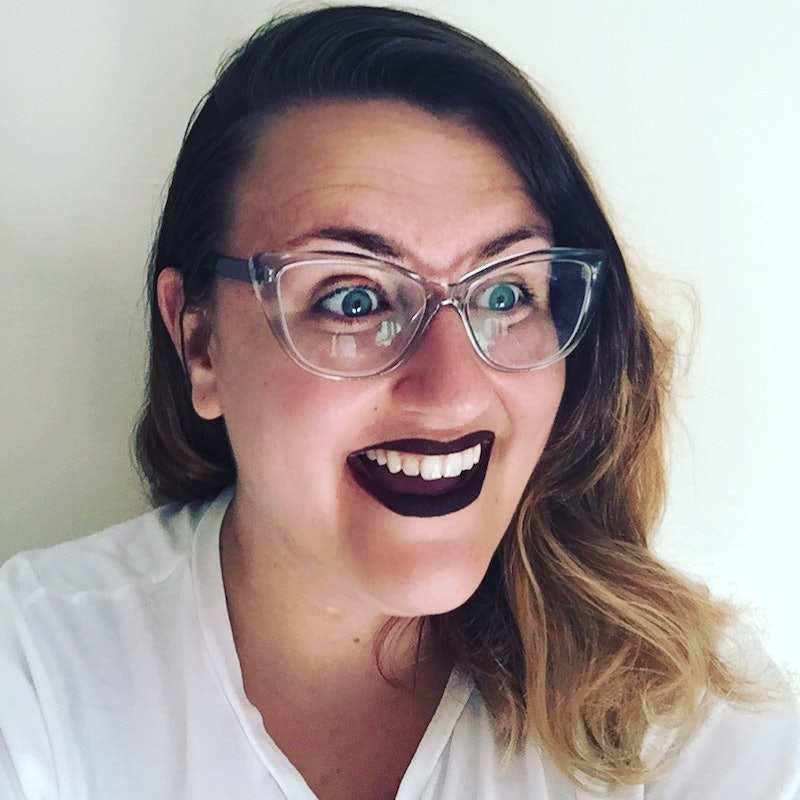 My boyfriend was chopping carrots in the kitchen when I caught a glimpse of myself in the mirror and lamented how bad my skin looked, to which he exasperatedly responded, "Aren't you bored?" In that moment, I realized that yes, I was bored of all the negative self talk. And I definitely needed to learn how to stop being mean to myself.

Don't get me wrong: I'm not the type of depressive self-loather who moves from person to person, pointedly discussing all the things I hate about myself. No, my type of self-loathing is insidious and subtle, and unfortunately, it's also pretty common. For women, self-hate is supposed to be part of the narrative. Society tells us our flaws are ever-present and in need of being dealt with, whether they pertain to our looks, our careers, or our relationships. Too fat, too old, too broke, too single — the list goes on and on. The real rub of the thing is that we're also often told not to dwell on our flaws too much, but instead practice self-love with a smile on our faces. So... hate yourself but try not to, society tells us. Love yourself, but strive for an ideal at the same time.

It's a perplexing position to be in, and one that has caused me to spend a bit too much time talking garbage about who I am as a person. It's also, as my boyfriend pointed out, incredibly tiresome (both conversationally and psychologically). So, for experiment's sake, I decided to put an end to my incessant urge to verbalize self-hate for one week. Here's what happened when I did.

For Day 1 of this experiment, I decided to take a photo of myself first thing in the morning. While I'd like to be able to report all the positive things I saw in this photo, I simply couldn't observe any. For me, putting an end to self-hating dialogue would have to be about stopping the negativity first — then, maybe later, I'd be able to find the positives. Instead, I just listed the facts, without positive or negative connotation: This is a 30-year-old woman with sleepy eyes and messy hair. Is there something positive or negative here? Does it even matter?

Mondays are usually the day I spend the longest time at the gym, but lately, I've been really hard on myself while I'm there. Today, instead of being down about what I can't do, I tried to focus on simply exercising without judgement. I even turned off my activity app while I was working out. To be honest, it was nice to be able to experience exercise without any self-served side eye.

Tuesday was the day that I really started to take notice of an awesome side effect of not talking smack about yourself every time you look in the mirror: It was a real time saver. Instead of questioning my clothing and makeup decisions, or spending time picking apart my look, I simply got dressed and left the house. It was truly a revelation, and I wasn't rushed and sweating by the time I got on the train.

Halfway through the week, I actually started to feel better. Cynic that I am, I hardly expected this to happen. I assumed that I'd spend a week fighting against my "natural" instinct to hate myself, only to be constantly aware that I was, deep down, complete garbage. That's not what happened at all. Instead, when I took this selfie, I realized that I actually liked what I saw. That there was simply nothing to pick apart. Could it be that this experiment was actually helping?

Clearly, the reserve endorphins that come with not spending half the day in a state of narcissistic despair were working. I didn't spend a single minute of this day feeling bad about myself, and it shows. I realized on Thursday that it was time to start harnessing that power and using it for good. On Friday, I'd try to find (gasp) things to love.

Riding high off of the joy that comes with completely rejecting self-hate speech, I made a list of the things I like about myself. Interestingly, this is in direct contrast with a list I made as a kid... one that outlined all of my flaws. I won't share the details of that list here, because I don't want to give the impression that the things I love about myself are things that other people should attain or emulate in order to achieve the same goal. What I will say is this: After you purge yourself of negative self-talk, make your own list and love the shit out of it.

The last official day of my experiment came, but I'm definitely going to try to keep the process going. No, I haven't completely changed as a person in one week's time, and I'm keenly aware that all that deep-seeded self loathing takes more than just a few days to remedy. However, removing negative self-talk from your daily routine definitely has its benefits. You save time, your mind has the ability to think about things beyond your perceived failings, and most importantly, you actually start to feel good about who you are. In a culture that's basically programmed to make us feel the opposite, that's no small feat.

On Sunday, I asked my boyfriend if he'd noticed that I'd not said anything negative about myself during the previous week. I wish I could conclude this piece by saying that yes, he noticed, and that he was very impressed with my resolve and overall self-improvement. But he didn't. He hadn't noticed a thing. I was slightly miffed, but then I realized that it didn't matter: I noticed, and when it comes to loving yourself, you're the only one you need to impress.