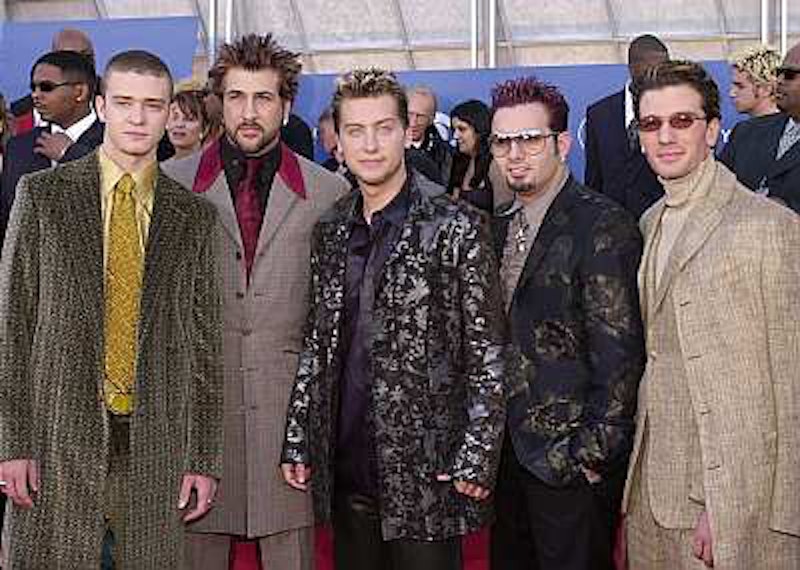 Let the record show that I am a failure of an *NSYNC fan. In a recent interview with Us Weekly, Joey Fatone named his least favorite *NSYNC song...and I did not recognize the name of the song.(Ugh, this is "I'll Never Stop" all over again. How did I let myself miss out on these *NSYNC tunes for so many years? Hey, if I were to write a song about this, I'd call it "I'll Never Stop Letting Joey Fatone, Justin Timberlake, JC Chasez, Chris Kirkpatrick, and Lance Bass Down.") Here's what the former boy bander said when asked to pick the *NSYNC track with the least flow:

"Riddle" is a song that came out on the European album which was dancing music. It was just horrible!

The ditty of which J. Fatone speaks only appears on the German edition of *NSYNC's self-titled debut album. You might be familiar with "Riddle," but the 18-year-old song is brand new to me. Yes, I am ashamed of myself. I consider myself a diehard *NSYNC devotee, but I never got around to acquiring or listening to German version of the group's first album. And yes, I am ashamed of myself.

There was only one thing to do: pull up "Riddle" and listen to it for the first time. I wanted to know what the On The Line star was talking about. I had to hear this allegedly “horrible” song with my own ears. As I listened, I recorded my reactions to the song. Here they are:

Call me Edward Nygma, because I will dig "Riddle" until the end of time.