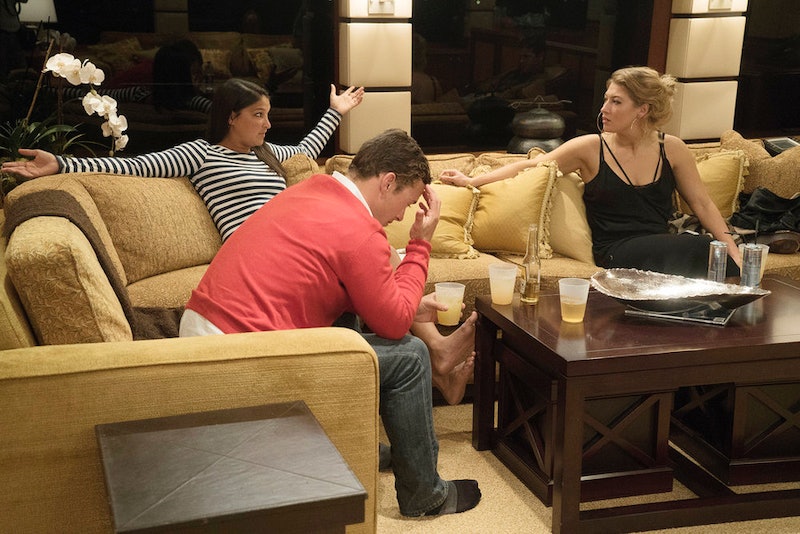 The worst-kept secret on Season 3 of Below Deck was finally let loose on Tuesday night's episode of Below Deck . Rocky finally told Emile about hooking up with Eddie for most of this charter season, which is the first person we've seen find out about their secret rendezvous in the laundry room. So how did Emile, who has had a major crush on Rocky all season, take the news? As well as you'd probably guess.

First off, Emile tried to play it cool and said that hooking up with Eddie was "hilarious" and "funny." But you could so tell that Emile was just dying on the inside, and can you blame the guy? He so wanted to get with Rocky all season, so to hear that some other dude had been able to seal the deal has got to be soul crushing.

Eventually, Emile did admit to Rocky that he was annoyed that Eddie was able to hook up with her and not him, but he mostly kept it together around her. But once Emile left her presence, you could tell a storm was a-brewing inside the deckhand. Not only was Emile pissy to Eddie when he gave him some orders, but he also blew up at Connie while they were working together. Emile was so frustrated that he even called her a "whore" to her face. I know you were just hurting Emile, but there's never any place for names like that. I thought Emile was better than that, and I was right because he later apologized. Thank you for that, Emile.

Well, while we let that drama simmer, let's turn to some other Rocky-Eddie hook-up revelations that are sure to unravel this crew by the season's end, shall we? We also learned that Eddie wasn't just a hook-up for Rocky, but she had true feelings for him, and now that Eddie has basically cast her away, she was completely down in the dumps. She even had another one of her breakdowns.

Now I would have more sympathy for Rocky in this situation, except for the fact that she knowingly hooked up with a guy that has a girlfriend. Rocky said that she thought Eddie wasn't really in a relationship anymore since he actively pursued her, but she can't be that naive, can she? I know Rocky is a free spirit, but that's just not how relationships should work.

However, I'm really more shocked by Eddie's behavior in this whole situation. Though he did finally admit to the camera in one of his confessional interviews that he and Rocky had been hooking up, he also insinuated that the whole affair was her fault and she completely came onto him, even though we've seen the sexy texts Eddie sent Rocky that seemed to get it started. Before this season of Below Deck, Eddie was one of my favorite crewmembers because I thought he was such a stand-up, fun guy. Unfortunately, Eddie hasn't shown that he's his usual delightful self this season, and that just makes me sad.

Clearly, it's only a matter of time before everyone finds out about Rocky and Eddie's hook-ups, and when that happens, their fellow crewmembers might start seeing these two in a different light.