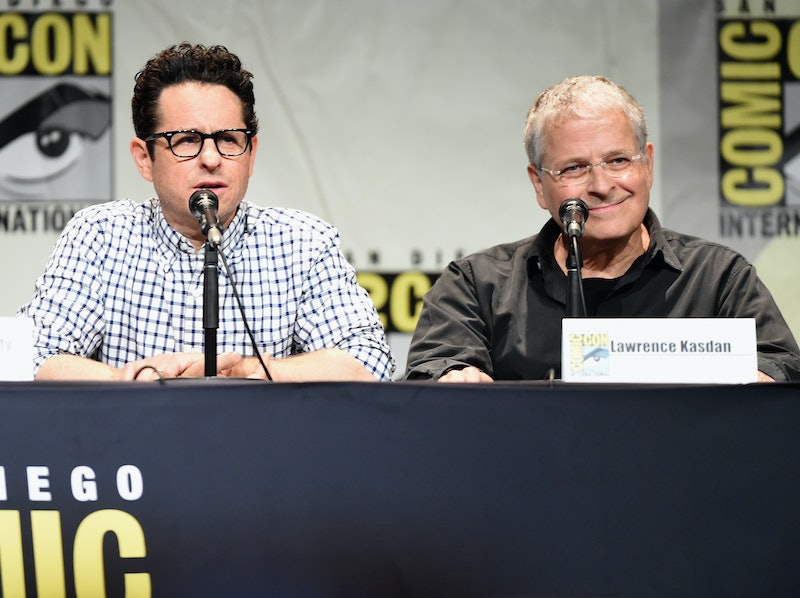 With only a little over a month to go until the year's most highly-anticipated movie finally premieres, the enthusiasm of some sci-fi fans was likely a tad dampened this Wednesday by the sad news that longtime Star Wars screenwriter Lawrence Kasdan will be retiring from the franchise. Kasdan first journeyed to a galaxy far, far away 35 years ago to script The Empire Strikes Back, and he also wrote Return Of The Jedi and The Force Awakens. 2018's untitled young Han Solo spinoff will officially be his last outing with the franchise, but who could take his place?

Kasdan announced his retirement in an interview with German magazine Bild, saying bluntly, "I did four Star Wars movies. That's more than enough." Instead, he plans to re-focus on directing; his prior experience in the director's chair includes both of his aforementioned Oscar-nominated films, as well as the likes of Body Heat and Silverado. But who will take over scripting duties now that Kasdan is leaving? His are no easy shoes to fill — even franchise creator George Lucas himself had trouble when he penned the three prequels. The next three films in the series already have screenwriters, but what about the untitled Boba Fett origin story and Episode IX?

Here are 11 promising candidates that Lucasfilm should consider to replace Kasdan.

The Oscar-winning screenwriter of Little Miss Sunshine wrote the first screenplay for The Force Awakens before it was rewritten by Abrams & Kasdan (although Arndt retains his writing credit). Now that Kasdan is going his own way, maybe it's time to give the writer of Toy Story 3 and The Hunger Games: Catching Fire another chance.

Aronofsky's projects have grown increasingly sweeping in scope over the years, from the intimate (and disturbing) Pi and Requiem For A Dream to the fantastical The Fountain and the Biblical Noah. But the eccentric director is not necessarily above high-profile sci-fi action fare like Star Wars — he was originally attached to direct 2013's The Wolverine before ultimately dropping out.

These two women share an Oscar with director Peter Jackson for adapting J.R.R. Tolkien's The Lord Of The Rings to the big screen. Since then, they've only tackled projects directed by their LOTR collaborator (King Kong, The Lovely Bones, The Hobbit); it would be great to see how they fare on their own. And it's not like Star Wars would be too far outside their wheelhouse.

Boyens' and Walsh's Hobbit co-writer would be another great pairing for a galaxy far, far away. Previews for the writer/director's Crimson Peak may have proclaimed Del Toro as "The Master Of Horror," but he's really more "The Master Of Fantasy." The Devil's Backbone and Pan's Labyrinth, arguably the man's two best films, successfully blend those fantasy elements with gripping war drama — a combination that would be perfect for the far-flung space battles of Star Wars.

Now that Lucasfilm and Pixar exist under the same mouse-eared umbrella, why not mine the latter for some of its incredible talent? Pixar has one of the best track records of any Hollywood studio working today. Docter, who has worked on some of Pixar's biggest hits (Toy Story, Wall-E, Up, this summer's Inside Out) could be a perfect fit.

One of the most important aspects of the Star Wars films has always been their coming-of-age stories, whether it's Luke Skywalker coming to grips with his destiny, Anakin slowly being consumed by the Dark Side, or the mysterious Rey being sucked into an intergalactic war. Jonze's Where The Wild Things Are was a moving, fantastical coming of age film, and his Oscar-winning script for Her painted a unique — and often alarming — vision of the future.

Chronicle was a sleeper sci-fi hit when it debuted three years ago, and its writer deserves a closer look. Like Episode VIII writer Rian Johnson, Landis is also an up-and-coming talent whose work on an acclaimed — and original (aka non-franchise) — 2012 sci-fi film should earn him the notice of Lucasfilm execs.

LeFauve worked on both of Pixar's 2015 entries, serving as a co-writer on Inside Out and as the sole-credited screenwriter for The Good Dinosaur. Next, she's joining the Marvel Cinematic Universe as the co-writer of 2019's Captain Marvel (alongside Nicole Perlman). Like Pixar and Lucasfilm, Marvel also operates under the umbrella of Disney. I smell a perfect storm of opportunity... especially since LeFauve would be the first woman in either the writer's or the director's chair in the entire Star Wars franchise.

Thanks to his work on divisive properties like Lost, Prometheus, and Star Trek Into Darkness, Lindelof's name alone is enough to raise the hackles of many an impassioned sci-fi fan. But those who have been paying attention to HBO's The Leftovers — which quietly transformed into perhaps the greatest drama currently on television in its second season — know that the writer appears to have matured, capable of crafting a puzzling, fantastical tale that's also chock-full of dynamic characters and emotional resonance.

This openly gay writer has been nominated for three Oscars for his work on Gladiator, The Aviator, and Hugo. He also created Showtime's horror/fantasy series Penny Dreadful, and he penned the most successful James Bond movie of all time, Skyfall. Blending his experience with a high-profile action franchise with his predilection for fantasy and his Academy Award pedigree would make Logan a perfect candidate for Star Wars.

If Lucasfilm can't secure LeFauve for Episode IX for some reason, they can always go after her Captain Marvel co-writer. Perlman became the first female writer in the MCU when she co-scripted Guardians Of The Galaxy alongside director James Gunn. And Perlman certainly knows how to give fans what they want: despite the lack of Scarlett Johansson's own solo film, Perlman went ahead and wrote a script treatment for a potential Black Widow movie a few years ago.

While we wait for more news on Star Wars: Episode IX, we still have The Force Awakens — Kasdan's penultimate contribution to the franchise — to look forward to in T-minus four weeks and counting.