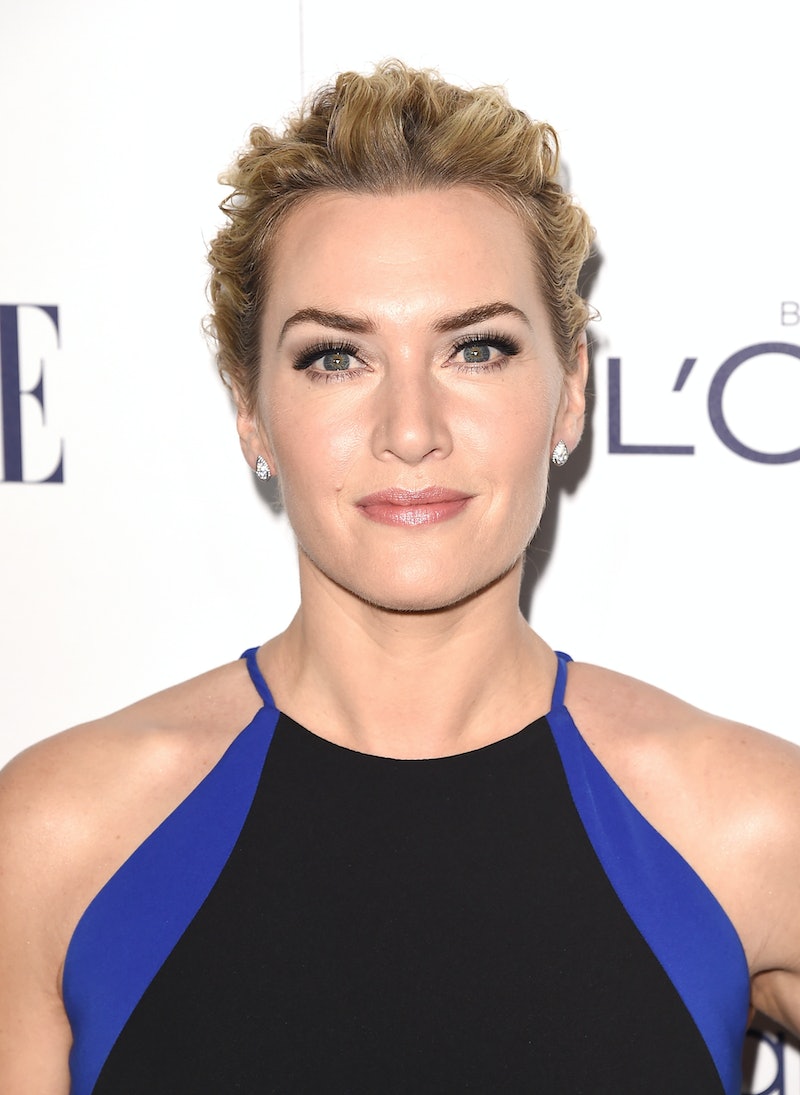 A few weeks ago, Jennifer Lawrence made an amazing announcement: She's done "trying to find the 'adorable' way to state [her] opinion and still be likable." In Lena Dunham and Jenni Konner's Lenny Letter, Lawrence wrote an inspiring essay about making less money than her male counterparts and how she's sick of staying silent about it. She even said her Hunger Games character Katniss Everdeen helped spark some fire in her essay. Both Josh Hutcherson and Bradley Cooper proudly voiced support for their former co-star, which was really encouraging to see. While plenty of people (including Hillary Clinton) are rallying around Lawrence and her fight against the gender pay gap, others are much less enthusiastic. When asked her thoughts on the matter, Kate Winslet wasn't a fan of talking about money and her remarks are disappointing, to say the least. In an interview with BBC's Newsbeat, the Titanic actress said,

I'm having such a problem with these conversations. I understand why they are coming up but maybe it's a British thing. I don't like talking about money; it's a bit vulgar isn't it?

But wait, there's more... Winslet went on to say, "I don't think that's a very nice conversation to have publically [sic] at all. I'm quite surprised by these conversations to be honest, simply because it seems quite a strange thing to be discussing out in the open like that. I am a very lucky woman and I'm quite happy with how things are ticking along." Oh no! There's so, so much to discuss here.

Let me begin by saying that I don't think it's fair to tear apart the actress for voicing her opinion — that's not my intention at all. Of course Winslet is allowed to think whatever she wants, and if she hasn't dealt with any sexism in her lifetime, she may simply be unaware that gender bias exists. Like she says herself, she's lucky! At the same time, there are many flaws in her argument that I'd like to highlight — in the hopes of educating anyone else who thinks the fight for equal pay is a "vulgar" thing to discuss.

I mean, even the word "vulgar" is problematic. Usually the adjective means something is offensive, rude, or inappropriate. I'm guessing she was going for this definition: "lacking sophistication or good taste; unrefined." Sure, money is something that tends to be kept private, but when women — not just in Hollywood — are making less money than men, why not talk about it? By not having any discussion, it just allows the systematic issue to continue. If anything is not in "good taste" here, it's the fact that men are still being paid more than women doing the same exact jobs.

In case those comments from Winslet weren't enough to make you cringe, she was also asked whether she's faced sexism in the film industry. Her response?

Honestly no. And if I'd ever been in that situation I would have either dealt with it or removed myself from it. I find all this quite uncomfortable. I haven't ever felt that I've really had to stick up for myself just because I'm a woman.

At least the silver lining here is that she hasn't dealt with sexism. Who would want to? But from my interpretation, Winslet's statement implies that if she did face sexism, it wouldn't be a big deal and she'd just handle it. This seems to suggest that other women should just suck it up and deal, right? Not the best message.

Hopefully this will be a learning experience for Winslet. Even if she hasn't faced any discrimination herself, that doesn't mean other women aren't dealing with very real prejudice. Part of me hopes she simply misspoke or was caught off guard by the question, and an even bigger part of me hopes this doesn't detract from the awesome work individuals like Jennifer Lawrence are doing. After all, it's 2015! Equal pay is long overdue.