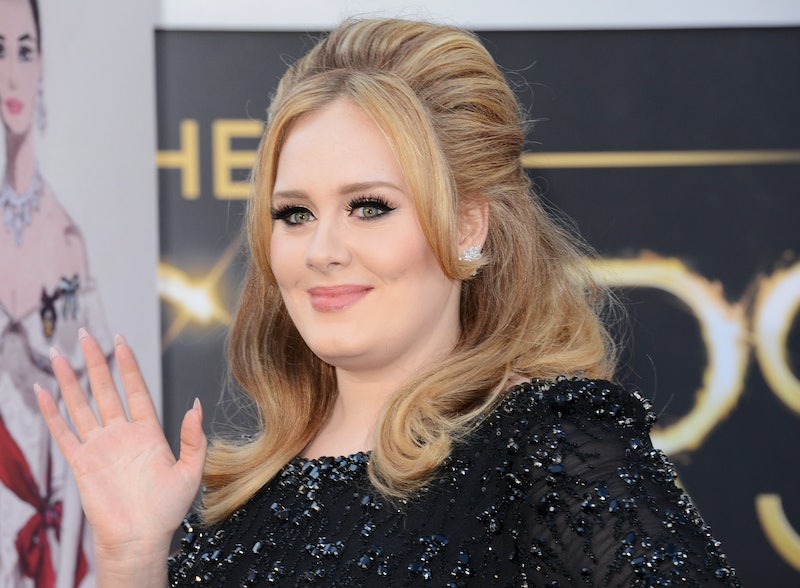 Before Wednesday, it had never even occurred to me to want a movie co-starring Jon Snow and Adele. And yet, now that's all I want in this whole wide world. Deadline is reporting that Adele is in talks to join a movie with Game of Thrones heartthrob Kit Harington, a film by Xavier Dolan aka the director of the singer's recent "Hello" music video. Apparently Adele's role in The Death And Life Of John F. Donovan wouldn't be anything major — just a cameo, according to the report — but it would still mark her acting debut (outside of her own music videos, of course). So, this year, the only thing on my list for Santa will be making this beautiful, beautiful dream come true.

This news just proves that Adele is hellbent on world domination. She already has 10 Grammy Awards and one Oscar (for the title track of 2012's Skyfall), so she's already halfway to an EGOT. Her "Hello" video is breaking records left and right. She's been immortalized in wax at Madame Tussaud's. And now she's teasing us with a transition into feature film work. She previously told KISS FM UK after the premiere of "Hello" that, "I’m sure I’ll get some flak for this," (no you won't) "but I actually would like to act after working with Xavier [Dolan]. I would be in a film for him, definitely." Now she's reportedly making good on that proposal, proving that Adele will accomplish anything she puts her mind to, dammit.

While we all wait with bated breath for Adele's sure-to-be stunning film debut, here's everything else you need to know about The Death And Life Of John F. Donovan.

The Cast Is Amazing

Adele isn't the only exciting cast member in John F. Donovan. (Shocking, I know.) Kit Harington — aka definitely-not-dead Jon Snow — stars as the titular character, an American movie star. Jessica Chastain, recently of The Martian and Crimson Peak, will co-star as the film's villain, a vicious gossip columnist out to destroy Donovan's reputation. The main cast is rounded out by acting legends Susan Sarandon and Kathy Bates, although their roles are still undisclosed.

The Plot Is So Topical

The film will focus on Harington's character, "whose correspondence with an 11-year-old actor living with his mother in England is exposed, prompting ill-founded assumptions that begin to destroy his life and career." According to Deadline, Donovan has a lot to say about the private lives of celebrities: "The film explores the hardships of fame and hurdles of the movie business through the lives of both, now and then, and reflects on the issue of identity and diversity in Hollywood over the past decade."

Dolan has stated that Donovan is at least partly based on his own life. "It is a movie about a man trying to make it, trying to live his dream and his life all at once, and being told that he basically can’t,” the director said while selling Donovan to distributors at the American Film Market. “It also is about a kid dreaming of having this man’s life for all the wrong reasons, not realizing how painful it actually is. I was that kid, writing love letters to actors — as a matter of fact, it seems like I still am. And that story is a tribute to both the kid I was and the idols of my childhood — some died, some just disappeared without a trace, because they didn’t fit."

The Director Is A Prodigy

Speaking of Dolan, most American moviegoers may not yet be familiar with his name, but he's famous internationally as something of a child prodigy. The young openly-gay French-Canadian filmmaker had written and directed five movies by the time he was 25 — his most recent, Mommy, won the Jury Prize at the 2014 Cannes Film Festival. Now 26, Dolan's sixth film, It's Only The End Of The World, will premiere next year starring Oscar-winner Marion Cotillard, Léa Seydoux, and Vincent Cassel. Donovan will be the director's English-language debut. Dolan is also an actor, having starred in three of his own films to date, as well as other projects like the popular French horror movie Martyrs. He also provides the French voice dubs for characters in American movies like Harry Potter (as Ron), Twilight (as Jacob), and The Hunger Games (as Peeta).

But really, let's remember the most important part of this news: ADELE. AND JON SNOW. IN A MOVIE. TOGETHER. That's all this film needs to catapult itself to the top of my must-see list, honestly. Now let's all bask in the fabulous glory of "Hello" for the umpteenth time while we await Adele's triumphant big screen debut.