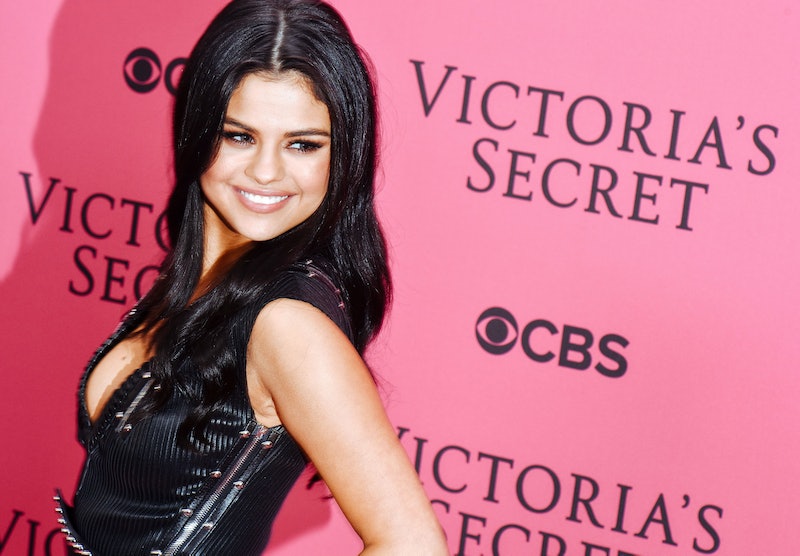 Another day, another rumor about Selena Gomez's love life. A few days ago, she was spotted hanging out with a new guy, so of course fans freaked out and did everything they could to learn more about Samuel Krost. When Justin Bieber recently said he wouldn't rule out a Jelena reunion, naturally people pondered what Gomez thought about their future together. Personally, I think everybody should focus all of that attention on Selena Gomez's awesome new album instead. She's so much more than who she's dating. Luckily, the "Same Old Love" singer decided to clear the air about the romance rumors. In an interview with E! News, Selena Gomez confirmed that she's single. She told the site, that she's dating "a little bit, but no I'm definitely single." So there you have it, straight from the source's mouth.

Besides putting dating rumors to rest, Gomez had a way more important gig on Tuesday — performing at the Victoria's Secret Fashion Show. Apparently she couldn't even believe it herself. Afterwards, Gomez shared an Instagram from her performance, writing,

This show was a dream to be on. Thank you so much @victoriassecret and all the angels for being SO nice, warm and fun!! and looking at you guys all day wasn't hard to do at all Abel killed it as usual and Ellie was shining brighter than ever! Can't wait for you guys to see it on December 8th!! K I'm done. What is life? Love you!!

Clearly Selena Gomez is busy doing her own thing and doesn't need to be tied down. Sure, the fact that she's dating a bit means she could have gone on a date or two with Samuel Krost, especially since E! News noted that Krost also attended the Victoria's Secret afterparty. They probably they spent time together there, but still, that's not the same as being in a relationship.

At the end of the day, the 23-year-old should be free to explore and date whoever she wants without people automatically slapping a label on things. Until she says otherwise, Selena Gomez is single and that's that.