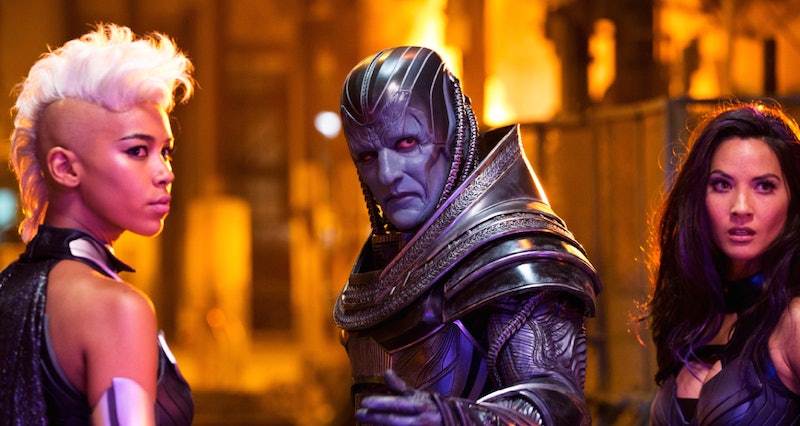 As if we all needed another reason to flock to theaters this December to see Star Wars: The Force Awakens , it has now been confirmed that the highly-anticipated film will play host to the first official trailer for next summer's X-Men: Apocalypse . "It’s our first thing out there so it is somewhat of a teaser but it’s certainly longer than a minute and it has a ton of cool stuff in it," confirmed producer Simon Kinberg to Collider this Wednesday. Apocalypse's tease will be screening right alongside the first trailer for Captain America: Civil War . (Both films will premiere in May 2016).

Civil War's inclusion here is no surprise, since Marvel Studios and Lucasfilm are both owned by Disney. But since the X-Men series is owned by 20th Century Fox — which is in direct competition with Marvel, and ergo Disney — it's something of a surprise to see it get a prime slot in front of the most eagerly awaited movie of the year. But ours is not to reason why, ours is but to get super excited at the first look the majority of us will get of Apocalypse, the crown jewel of the First Class trilogy that began in 2011 and continued in 2014 with Days Of Future Past. (I say "most of us" because some lucky fans got a glimpse at the film at San Diego Comic Con this summer.)

Here's what the first X-Men: Apocalypse trailer needs to show to get us all pumped for its debut next year.

A Good Look At The Villain

When Entertainment Weekly unveiled the first images of the Apocalypse cast this July — including the first look at the titular villain — reaction among fans was mixed, to say the least. This trailer will be the studio's first chance to prove its naysayers wrong, so rather than keep Apocalypse shrouded in secrecy, they should come right out and calm our fears. (The powerful mutant is being played by The Force Awakens star Oscar Isaac, which might have something to do with this trailer's placement, come to think of it.)

Days Of Future Past's post-credits scene teased the Apocalypse storyline by introducing us to a young En Sabah Nur (aka "The First One," aka "Apocalypse") being worshipped by ancient Egyptians at the feet of the Great Pyramids, which he was singlehandedly constructing with his magical mutant powers. It remains to be seen if this scene was simply inserted to whet fans' appetites for the sequel, or if it means we'll actually be getting glimpses of Apocalypse's origins. Hopefully the latter.

A Sense Of Scale

Action franchises — and comic book movies in particular — run into problems when each subsequent sequel attempts to one-up the film that came before, growing ever grander in scope until they start collapsing under their own weight. (This is part of the reason why Ant-Man was so refreshing this summer: because the literal fate of the planet was not at stake.) For X-Men, it will be hard to top the bleak future we witnessed in DOFP. But seeing as how Apocalypse will be our final outing with many of these characters, the movie better justify its doomsaying title.

Part of the fun of the First Class series has been watching it evolve stylistically, with each entry taking place in a different decade. First Class introduced us to the retro '60s of the Cold War; DOFP dropped us into the groovy '70s of Nixon; and Apocalypse will fast-forward to the hip '80s, with all its concomitant neon colors, shoulder pads, and other regrettable fashion choices.

Quicksilver (introduced in DOFP as played by Evan Peters) and Nightcrawler (introduced in X2: X-Men United as played by Alan Cummings) are two of the franchise's most popular — and most underused — mutants. Both characters have only appeared in one film so far, and fans have been desperate for more of each. Not only will Peters be reprising his role for Apocalypse, but Nightcrawler will be stopping by for the first time since 2003 — albeit this time played by Kodi Smit-McPhee (Dawn Of The Planet Of The Apes) as a younger version of the teleporter.

An Emphasis On The Ladies

Ever since the first X-Men movie in 2000, the franchise has largely been concerned with its very male characters like Wolverine, Professor X, Magneto, and Cyclops. Not until Jennifer Lawrence was introduced as Mystique in First Class was there a true central female character. (Sorry, Halle Berry.) Apocalypse adds Game Of Thrones' Sophie Turner as young Jean Grey, Olivia Munn as Psylocke, Alexandra Shipp as Storm, and Lana Condor as Jubilee. Rose Byrne will also be reprising her First Class role as Moira MacTaggert after sitting out DOFP.

And yes, even though I just said I wanted to seen an emphasis on the ladies, that doesn't mean I don't also want to see more of the undeniable bromance between James McAvoy's Professor X and Michael Fassbender's Magneto — especially if Apocalypse does turn out to be their last outings as these characters. Although they're nominally playing enemies, McAvoy and Fassbender have more sexual chemistry than most onscreen romantic couples and their bromance has always been a fan-favorite part of the First Class trilogy.

Although Lawrence will be slinging arrows in the final Hunger Games movie later this month and then acting her way to a possible fourth Oscar nomination with December's Joy, I'll still never tire of seeing J.Law on my screen. While we all anxiously await her upcoming sci-fi film with Chris Pratt and her in-progress comedy with Amy Schumer, watching her don blue body paint and kick apocalyptic butt will have to tide us over.

X-Men: Apocalypse teleports into cinemas on May 27, 2016, but you can get your first taste of it when Star Wars: The Force Awakens debuts on December 18.