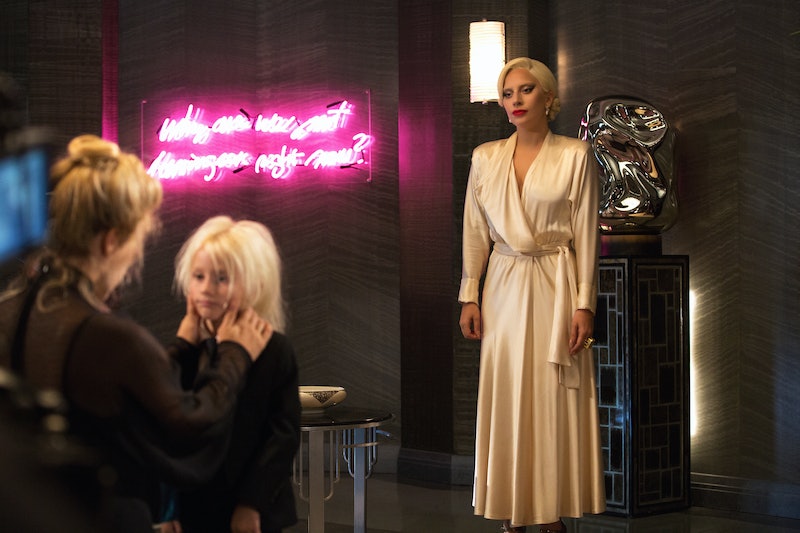 I must not have gotten the instruction manual when American Horror Story: Hotel began, because I'm not at all aware of what the rules are. Were we supposed to write in to Ryan Murphy and request a pamphlet? I keep a notebook by my side for every episode I watch of AHS: Hotel, because in every episode there's new things I discover that I have not previously known. So what are the rules on American Horror Story: Hotel ? Can ghosts do whatever the hell they please? Is dying on site then never leaving (ever) status quo?

There are a lot of questions to be answered on American Horror Story. In fact, I urge FX to make Season 6 American Horror Story: Me Trying To Figure Out What's Going On, just incase Orphanage or Roswell are too easy. After being a long time fan of the show, I think I have a pretty good understanding of the Rules of the Road: American Horror Story (available on iBooks and Barnes & Noble, if people still shop there). So what are the rules for Hotel? Here's what seems to be the general gist of what is and isn't allowed for the supernatural on the show.

1. Vampires Can Still Be Killed

Duh. Lady Gaga acted as if Tristan had an eyeball in the middle of his head when he asked about invincibility when it comes to vamps. According to The Countess, vampires are immortal, but not invincible. Aka, don't jump in front of a bus, Tristan.

Biting vampires are soooo seven years and five Twilight movies ago. If you're a vampire, you cut. Email Gaga for where to find blade gloves on Etsy.

3. Ghosts Can Return For Unfinished Business

So if you're still looking to seek revenge on someone for killing you, or kidnapping your child (I'm looking at you Ms. Evers) you can still bop around the premise.

4. If You're Killed, You Might Be Staying For A While

Similarly, if you die on the grounds of somewhere, such as the Hotel Cortez, you seem to hang around for a while. Here's Ryan Murphy's take on the ghost rule, as told to Entertainment Weekly: "Whenever we’ve done ghosts or supernatural things, that rule is a constant on the show: The place that you die is the place that you haunt. That’s a rule that harkens back to season one."

5. Don't Drink The Blood Of The Sick Or Dead

6. Ghosts Are Visible To All

I'm honestly embarrassed that I thought at one point in my life that ghosts looked like Casper. Not only do ghosts on American Horror Story not look like a little poof of cloud like Casper, but they're also not friendly like him either. Ugh. See: Serial Killer Dinner Party From Hell.

7. The Dead Even Care For Living People... Sometimes

Liz Taylor managed to stay alive for years since The Countess murdered the two business men in the hallway of Hotel Cortez. So, just do whatever Liz Taylor does and seem really disinterested that you're living with a bunch of ghost killers.

Maybe Lady Gaga was just being dramatic here, but she warned Tristan about falling in love. Maybe a vampire's heart can't handle it?

Tune in Wednesdays for a thousand new rules, I'm sure.