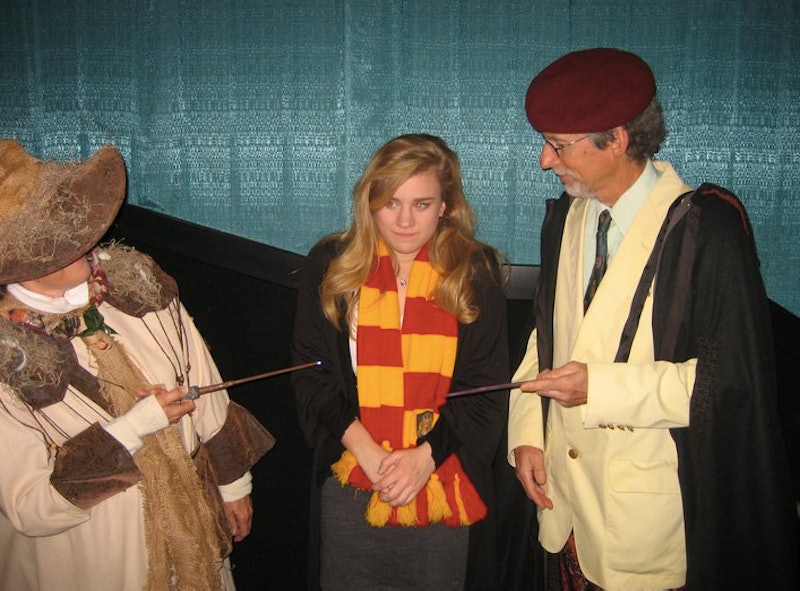 I always thought that the first time I ever cried half-naked on a bathroom floor it would be over something monumental or romantic, like my family denying my true love because of a centuries-long blood feud between our families, or Trader Joe's running out of cookie butter. But alas — in 2007, a wee 16-year-old me was curled on the tiles whisper-sobbing at two in the morning not for the likes of those, but for a reason that I could never have anticipated: at that point in time, I was one of the few people who had read Harry Potter and the Deathly Hallows ... on the entire planet.

It was a responsibility I never expected to bear. I am not special. I was not chosen. It just so happened that a drugstore beneath the place where my dad worked had misread the box labels when the copies arrived two days in advance, and put them out to sell accidentally — at which point my dad, who is more baller than any dad has a right to be, quickly snagged one for me to read before the place got busted. It could have just as easily happened to you. It could have happened to any of us! But my bb self did not question this chance of fate, which inevitably led to all of the following:

People reading the new release of Harry Potter novels should have honestly been tested by the government for studies on sleep deprivation. Like, I don't think I could stay awake in a situation where someone was actively threatening my life for 24 hours, but I somehow powered through all bajillion pages of that novel without batting an eye.

Emotional Devastation That Ripped Organs I Didn't Know I Had

I don't think I shut my mouth for hours. Like, nothing was coming out of it; it was just hanging open, slack-jawed with complete incomprehension. Hedwig. Dobby. Tonks. Lupin. George. For some reason, though, it was Colin Creevey's death that just wrecked me. He was such a cinnamon roll of a human, so excited, so loyal, so grateful just to be included in this magical world and so fearless about defending it, even though it had been cruel to him in the short time he'd been there — I couldn't not see Oliver and Neville holding his body for DAYS.

Here's the thing: I couldn't say a word ... to anyone. It was like I was suddenly on a different plane of existence. Like I was Sirius, on the other side of the veil. It was my moral obligation not to say anything to anyone, and I was determined to stay true to it, but oh dear God. It was like watching all your friends walk into a busy intersection in slow motion — they didn't have any idea they were about to be emotional roadkill, and you couldn't even yell to warn them.

Plus all I wanted to do was talk about it. To process the insane rollercoaster of sadmotions with the millions of people I knew would soon share my heartache. But in the day that passed between me finishing the book and the book actually coming out, I was an island all my own. Cut off from humanity. Ripped from my own soul. Which is probably why I eventually resorted to ...

At the midnight release party I refused to share whether Harry lived or died, but I might have told them that Snape and McGonagall were having a decades long secret affair and that Harry was actually their lovechild. I also might have told them that Dudley was Voldemort all along. (In my defense, STRANGER THINGS HAVE HAPPENED IN THAT SERIES.) Unfortunately, imagining these ridiculous scenarios in my head got my imagination jogging just enough that I then started ...

Writing ALL The Fan Fiction

I'd been an avid fan fiction writer since sixth grade, but here was an opportunity I'd never had before: I could be the first. When empty, wrecked, emotionally-compromised Potterheads flocked to the gates of fan fiction hell for some chance of retrieving a piece of their souls, I would be the one to greet them. I cranked out five stories in a day (with massive SPOILER ALERT tags — I'm not a monster), and I can definitively say that I was the first writer on there to catch that Snape's "Look at me" was in reference to Lily's eyes, and exploit that for the sake of ANGSTTTT.

Impatience I Had Absolutely No Right To Feel

Thank god I didn't have texting or Facebook at 16 or my friends would have straight up blocked my ass. I literally showed up on people's doorsteps asking if they'd finished the book. I went up to strangers at the pool. I HAD FEELINGS AND THEY NEEDED TO BE EXPRESSED.

Everybody finished. We laugh. We cried. Mostly actually we just cried. But then we talked it all out, and everything was right with the world again.

... At least, until Harry Potter and the Cursed Child just sent us all into a frenzy all over again. Truth bomb: THIS FANDOM WILL NEVER BE FREE.

More like this
10 Must-Read New Books Out This Week
By K.W. Colyard
Sadly, 'Fantastic Beasts: The Secrets Of Dumbledore' Isn’t Streaming — Yet
By Arya Roshanian
The 20 Best Audiobooks To Fall Asleep To
By Aoife Hanna and K.W. Colyard
'Bridgerton' Star Nicola Coughlan Confirms Season 3 Will Focus On Colin & Penelope
By Grace Wehniainen and Alyssa Lapid
Get Even More From Bustle — Sign Up For The Newsletter