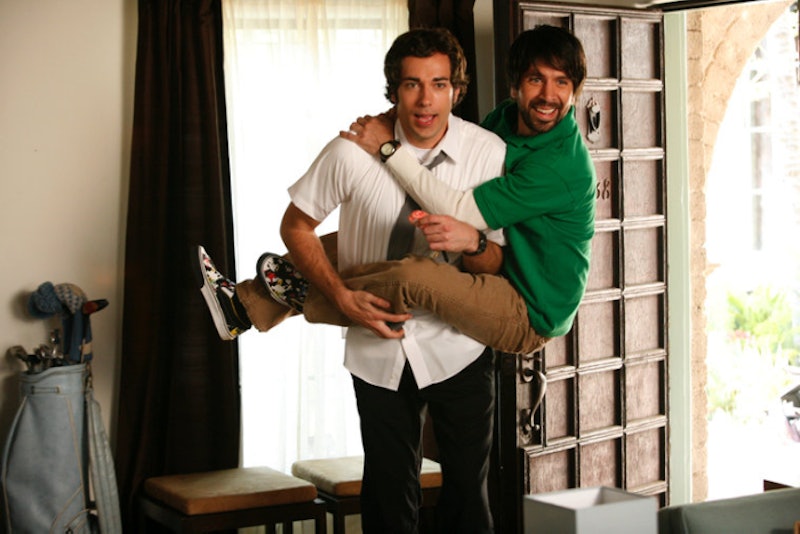 More than the missions, the romance, or the hilarious Buy More subplots, the thing I miss most about Chuck is the bromance between Chuck and Morgan. Those two buddies were the beating heart of Chuck, and they went through everything together. Morgan was by Chuck's side when they were just kids and Chuck's mom walked out on the family; Chuck always believed in Morgan, especially when no one else did. From spy missions to breakups, there was no life moment too big or small for these guys to tackle together. They are the perfect example of what it means to be best friends.

I am sure you and your BFF are just as special. Every best friendship has its own backstory, trials, and moments of triumph. Chuck and Morgan have the slight advantage of being TV characters whose friendship evolved with their major life changes over the course of four seasons. In real life, it's not spy drama you and your best friend have to deal with (well, probably not). Instead, you have to deal with getting jobs in different towns, getting married, or simply having your lives move in different directions, and all of these things can be just as scary as diffusing a bomb when you are stuck facing the possibility of your friendship irrevocably changing.

That's where Morgan and Chuck come in. They may be fictional, but they can still offer some major tips on how to keep your friendship with your bestie going strong through every milestone life throws at you.

1. Never Forget It Takes Two Of You To Make A Sandworm

Early in Season 1, Chuck was still grappling with his new reality as the Intersect and, in the process, he started making less and less time for Morgan. Whether it is your life that is moving at warp speed or your best friend's, communication is vital. Even when their friendship felt rocky, Morgan still had Chuck's back. Even if things are strained, making an effort to remind your best friend that you are in this thing together will mean the world to them.

2. If You Become A Spy, Confide In Your Friend

Chuck kept a huge secret from Morgan for a long time because he thought he was protecting him. The truth is, his life became way better when he didn't have to constantly lie to his best friend. If you want your own friendship to be solid, then trust your best friend. Even if you think they won't understand what you are feeling, just the act of telling them can make your relationship stronger.

Even if you're dating someone or just started a new job, carve out some BFF time to do something you both love doing together. For Morgan and Chuck, that thing was video games and, one time, goofing off on a stripper pole. Whatever your thing is, don't let it fall to the wayside just because you are getting older.

4. Support Them During The Bad Times, Even If They Tie You Up With Electrical Cords

Chuck did not always take tough times well, but Morgan knew when to tell his friend to stop wallowing and put on some pants. You know your best friend better than anyone, so don't bail on them when they move to a new place or go through a messy breakup. Be like Morgan, and make sure they know you will be there for them even when they are not at their best.

Being in a romantic relationship can be exhilarating, and it is easy to let your friendships fade as you enjoy your new boy or girlfriend. Don't forget about your platonic soulmate when you find your romantic one though. Even if you don't feel like you're pushing them away, your friend might feel a little insecure about their place in your life (even Morgan did, and he and Chuck were almost never apart). Just check in with them and don't trivialize their concerns.

Falling in love, getting promotions, becoming secret agents — Chuck and Morgan were always pumped for each other when life sent good things their way. Even if your friend is on the other side of the country, you can still make a big deal about their promotion. The good times are the best times, so make sure you celebrate them in style.

7. Friends Tell Friends What To Wear Under Their Wetsuits

Sharing is caring. If Chuck can teach Morgan about what to wear under a wetsuit, then you can make sure your friend knows whether the party you are going to is casual or fancy dress. It's just what best friends do.

Morgan and Chuck truly are the Yodas of friendship. Take their wisdom and make sure your friendship is as enduring as theirs.