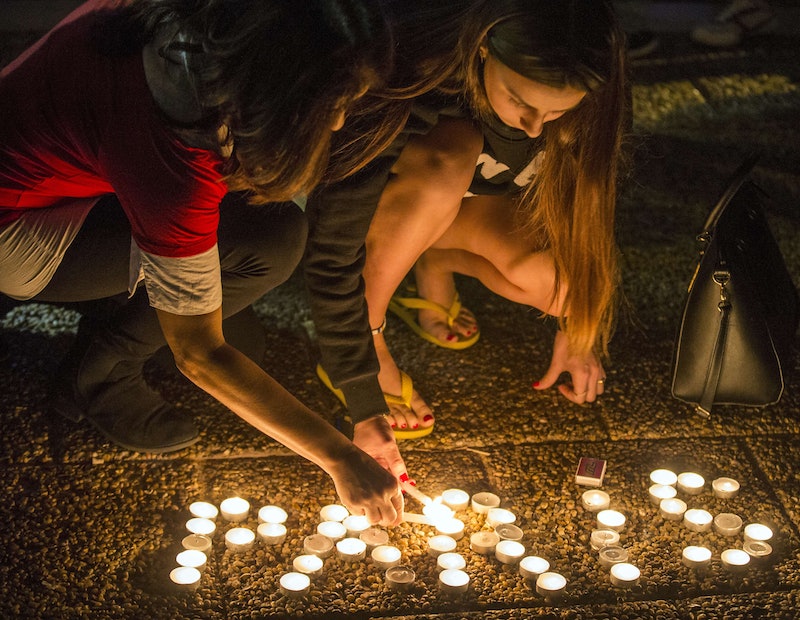 The terrorist attacks in Paris on Friday night were some of the deadliest the city has ever seen, with attacks happening at multiple locations across the city in a very short time frame. Some of the terrorists fired at civilians in bars or restaurants while others used suicide vests to blow themselves up. Officials believe that the attacks were part of a coordinated effort, and ISIS has taken responsibility. According to police, at least 129 people have been confirmed dead, including eight of the attackers themselves, and 352 were injured, with many still in critical condition.

Because there were so many different attacks at so many different locations, all occurring within about an hour of one another, the sequence of events can seem chaotic. However, it seems clear that the terrorists were targeting heavily populated venues in central Paris. And a basic timeline of events is slowly becoming clearer.

(All times are local time in Paris)

Suicide bomber detonates outside the Stade de France arena where France was playing Germany. Bomber was at a nearby restaurant.

Two more bombers detonate outside the stadium. The president of France, Francois Hollande, who was attending the match, is evacuated after the second of the three blasts. The other two bombers also use nearby restaurants as locations for the blast.

Gunman open fire at Le Carillion, a popular bar in Paris's 10th district, northeast of the city center, not far from the Place de la Republique.

Gunman then crossed the street to Le Petit Camboge, a southeast Asian restaurant, and once more open fire. At least 12 are reported dead between the two attacks.

Just south of Le Carillion and Le Petit Camboge, a gunman begins shooting at La Casa Nostra Pizzeria and Cafe Bonne Biere, also across the street from one another on Rue de la Fontaine au Roi.

Another shooting is reported at La Belle Equipe bar on the Rue de Charonne in Paris's 11th district, near the city center, according to BBC. Witnesses report two gunmen opened fire into the terrace of the cafe. At least 19 were reported dead.

Gunmen attack the Bataclan theater, which seats 1,500 and where a sold out rock concert was in progress. Witnesses reported gunmen entered from the back and fired into the crowd. Some concertgoers were able to escape through emergency exits, but many were left trapped in the hall.

The hostage crisis at the Bataclan theater is declared over, with all four attackers dead. One was shot, while three activated suicide vests and blew themselves up. Reports are saying that 89 hostages were also killed.