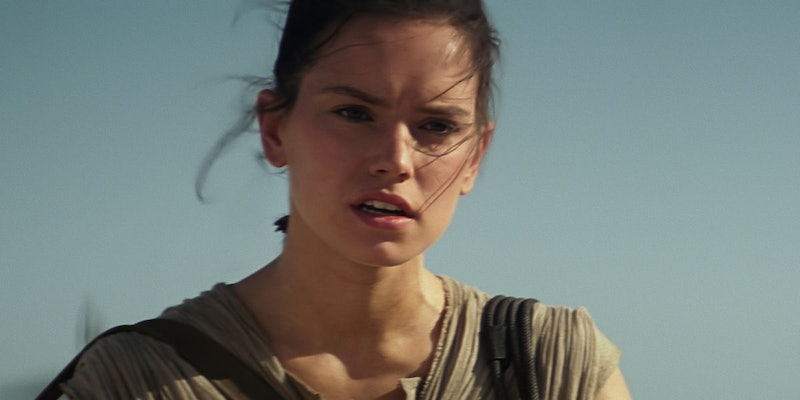 I have a potentially not socially acceptable confession to make: I am only moderately excited for Star Wars: The Force Awakens. I know this is akin to blasphemy in the world of fandom, but I missed the Star Wars boat when I was growing up. The original movies came out before I was born and my only encounter with Star Wars as a child involved a brief, but intense infatuation with Ewoks. It wasn't until 2014 that I finally watched the original movies with my Star Wars-loving friend at Dragon Con. I was majorly sleep deprived and drinking way more caffeine than usual during the experience, so my memory of what actually happened in those three movies is spotty at best. I liked them, though! Hence my moderate excitement level for Star Wars: The Force Awakens , which looks like a cool movie whether you are a lifer or a relative Star Wars noob like me.

Each trailer for The Force Awakens has been a flashy display of awesome special effects, cameos I don't fully understand, and a cadre of fun new characters including BB-8 who I (and the rest of the universe) predict will be the breakout star. Between me and my fellow Star Wars newbies out there, the trailers have been more than a little confusing. If you can't remember which character is Rey and which is Finn and what exactly the dark side is, then I have the Star Wars trailer for you. Designed for the young viewers of Disney and Disney XD, this trailer breaks down Star Wars: The Force Awakens so even Star Wars newcomers can understand why everyone is making much ado about lightsabers.

These Are The First Gen Characters, They're Kind Of A Big Deal

"A long time ago, a group of young heroes banded together to save the galaxy from the evil empire," says the helpful trailer narrator. Han, Leia, Luke, Chewbacca, C-3PO, and R2-D2 are all returning for the new movie. No, I don't know why the robots (err...droids) haven't rusted yet either. These guys blew up two Death Stars (AKA giant scary sky weapons), got some medals, and got themselves involved in an incestuous love triangle. Fun for the whole family!

I like how this trailer rolls. Instead of trying to sell me on why I should know the names of spaceships, alien creatures, and random planets, it basically just says, look at all this cool stuff! Star Wars does some major world-building, but it's also not 100% necessary to know where Tatooine is in order to enjoy the movies.

These Are The Bad Guys

These are a few of the people who are on the Dark Side. Anyone wearing black and/or wielding a red lightsaber is bad. They work for the new Darth Vader dude, who may or may not be Luke Skywalker depending on who you ask. Just don't worry about that for now.

Rey is "a scavenger looking for answers." She appears to be the focal point of the story, and she majored in badassery at the Empire Academy. She will be your favorite character.

Finn is a "rogue stormtrooper looking for something to believe in." Basically, he was on team bad guys, but he was not down with their mission statement. Hence the whole going rogue thing.

Don't you just want to tackle hug it? BB-8 is described as a "mysterious droid" and I am not even going to bother understanding what that means. I think the important thing to understand here is that BB-8 is the cutest droid in all the land.

Somehow these three characters are going to come together to save the universe. There's probably going to be some drama over Finn's stormtrooper background, but this appears to be your standard "rag tag group of heroes save the day" style of storytelling. It's just that "the day" will be stretched out over the course of three movies.

They Have To Stop This Craziness

Basically, everything the old guard did to save the galaxy is being undone by this new dude and his minions. Rey, Finn, and BB-8 are the galaxy's only hope!

If you are a super fan then you are probably grumbling about this being an oversimplification, but I think The Force Awakens is a going to be a perfect entry point into the series for new and casual fans. At its core, Star Wars is a good versus evil tale. As long as you know that (and that BB-8 is adorbs) then you are ready to see this movie and embrace the Force.