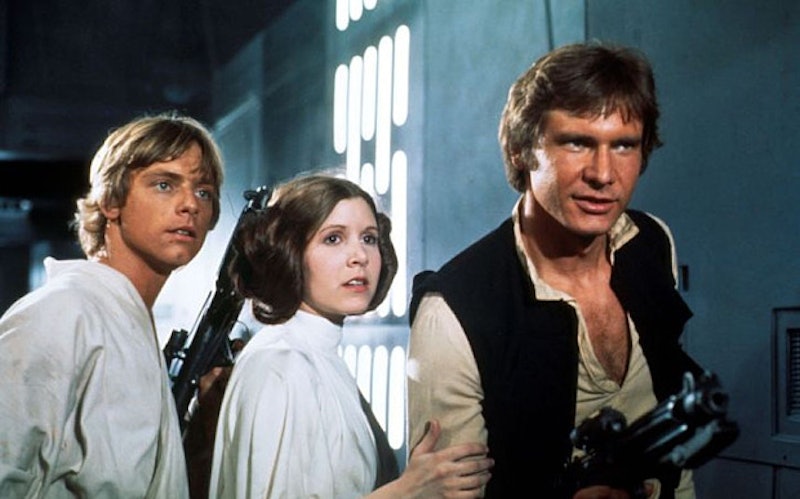 If you weren't aware, there's a new Star Wars movie coming out next month, and it's kind of a big deal. Star Wars Episode VII: The Force Awakens is expected to shatter box office records when it finally hits theaters after already breaking records for ticket pre-sales and trailer views. Still, there may be some people out there who are intrigued by all of the hype but who have never seen a Star Wars movie before in their lives. So is it really necessary to watch the old Star Wars movies before watching The Force Awakens ?

One-thousand percent yes. I mean, technically, you can do whatever you want, but if you actually plan on understanding and enjoying the new movie, then you're going to want to watch the other Star Wars movies. Although it's true that The Force Awakens takes place 30 years after the last chronological Star Wars movie (Return of the Jedi) and is focusing on brand new characters like the mysterious scavenger Rey (Daisy Ridley), reformed Stormtrooper Finn (John Boyega), and bad guy Kylo Ren (Adam Driver), the movie also features loads of returning characters from the original trilogy. So even if you've heard names like Princess Leia, Luke Skywalker, and Han Solo before, you're going to need to know who these guys are and why their return to the franchise is such a big deal.

In order to do that, you'll need to watch the first three Star Wars movies: Episode IV: A New Hope, Episode V: The Empire Strikes Back, and Episode VI: Return of the Jedi. There, you'll meet those three returning characters, plus others like Chewbacca and R2-D2, as well as learn the backstory that leads into the new movie. The Force Awakens trailer is full of references to those films and the events that happened therein, so unless you want to spend the entire movie utterly confused you'll need to know about The Jedi, The Empire, and every other thing that's likely to come up in The Force Awakens.

Not only that, but the new characters are expected to be intrinsically linked to what's come before them. Speculation is rampant that Rey is either the daughter of Leia, Han, or Luke; or some combination thereof. Kylo Ren is obsessed with Darth Vader, the villain of the original trilogy. And Finn has been shown to be a possible Jedi, and you'll want to know the significance of that. So now that I've established the importance of the original trilogy, what about those other Star Wars movies? Do you need to watch the prequel trilogy, too?

Probably. Let me just say this: Better safe than sorry. Although it's true that most of what fans have seen of The Force Awakens' nostalgia revolves around the beloved original trilogy rather than the, err, less beloved prequel trilogy, it's still very likely those movies will be referenced as well. There are also possibilities for returning characters from those films, with a few fans even positing the theory that Episode I: The Phantom Menace villain Darth Maul could make an appearance. So although it might not be essential to watch the prequel films (that's The Phantom Menace, Episode II: Attack of the Clones, and Episode III: Revenge of the Sith), you'll still want to in order to get the fullest Star Wars experience.

Star Wars: The Force Awakens is going to be the movie event of the year, probably the decade, and maybe the century. You're going to see it whether you want to or not, so you might as well prepare yourself for it. And for God's sake, make sure you know your Ewoks from your Wookies.