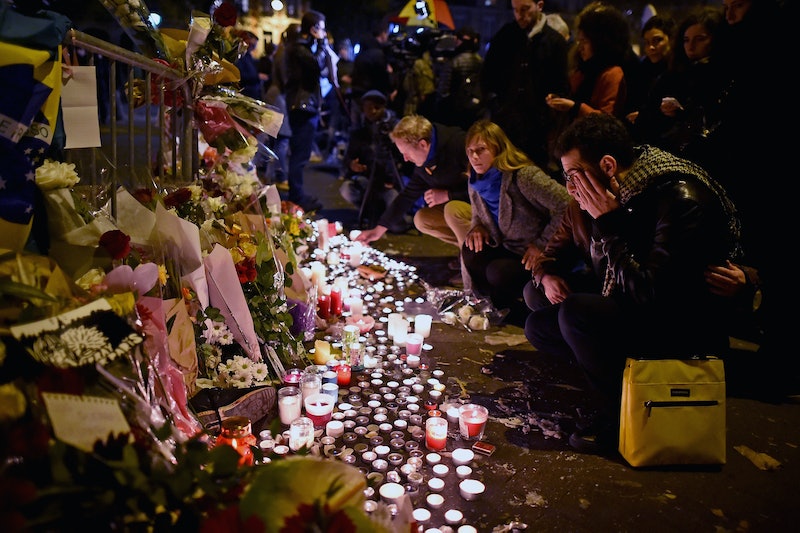 Paris is in mourning after six terrorist attacks left 129 people dead and more than 350 injured. As previously reported by various outlets, the site of the deadliest attack was at the famed Bataclan Concert Hall, which was playing host to an Eagles of Death Metal concert until gunmen stormed the theater. Eyewitness accounts of the Bataclan attack have been coming in throughout the day, and they all describe a similar scene of terror.

Based off the accounts, it seems, at first, many victims described hearing what they thought were fireworks. Soon, though, it became apparent there were armed men inside the concert hall. Some victims attempted to leave through nearby exits while many others lied together on the floor. The hostage situation ended with a police raid that left two attackers dead, and the survivors were met with more carnage outside of the hall as they had no choice but to walk over dead bodies in order to get to safety. At least 80 people died in the attack on the Bataclan.

These are just a few of the first person accounts that have been shared in the hours after the attack. The harrowing accounts are incredibly difficult to read, but they speak to the courage of the people who were inside the building. Choosing to share their stories online and with news outlets so soon after the traumatic night could not have been easy.

Reddit user ThrowAwayF***2015 was reportedly inside the Bataclan. After their escape, they posted a detailed account of what happened inside the Bataclan from their point of the view. The original post was written in French and has been translated by another Reddit user, shapkaushanka. This is an excerpt from the post:

Waiting for the police to arrive, without any notion of time (no watch, couldn't get to my phone). Feeling people getting up to suddenly get shot down. And again. And again....

Not allowed to move, because a simple movement made the pain worse - mine as well as theirs - (we were really all interwoven together). Not allowed to talk, to whisper, nothing. Someone starts to cry? They were met with 'shushes' from everyone.

The terrorists didn't say anything, apart from at the beginning when they said something about Syria, French President Hollande, and the fact that it was only the beginning. At the start, they 'explored' the place, shooting randomly at people lying on the ground. Then we couldn't see anything. Then we heard gunfire. It was impossible for me to quickly get up and escape, every muscle was numb and it was impossible to see the rest of the hall without potentially coming into view of the terrorists, a chance that I didn't dare take. I was counting on the police.

The Guardian has been gathering accounts as well, including this one from 57-year-old Marc Coupris:

It was carnage. It looked like a battlefield, there was blood everywhere, there were bodies everywhere. I was at the far side of the hall when shooting began. There seemed to be at least two gunmen. They shot from the balcony. Everyone scrabbled to the ground. I was on the ground with a man on top of me and another one beside me up against a wall. We just stayed still like that. At first we kept quiet. I don’t know how long we stayed like that, it seemed like an eternity. I saw my final hour unfurl before me, I thought this was the end. I thought I’m finished, I’m finished. I was terrified. We must all have thought the same.

Buzzfeed spoke with another witness, 35-year-old Lynda, who was vacationing in France:

I felt like I was in a bad dream, I was in total denial, I told myself it wasn’t possible, and I tried to tell myself — no, you can’t die today. I tried to focus on my breathing … I covered my ears because of the noise of the gunshots … I had really irrational reactions, I told myself — I must keep my bag next to me. I had this fear it would turn over, because inside I had my jacket, and a friend’s jacket, and I told myself — what if we’re able to leave and we’re cold? It was weird to get hung up on things like that.

On Facebook, Benjamin Cazenoves allegedly reported from inside the hall during the attacks:

It was towards the end of the gig and we heard what sounded like firecrackers or fireworks. Everyone thought it was part of the show but then I saw the lead singer's face drop before he ran off stage and the lights came on. We all just dropped to the floor. We were to the left of the stage in the main standing area and quite near the fire exit. Some managed to crawl out but there was just a pile of people by the fire exit. We didn't know what we were crawling over.Then when we got out there were just people running for their lives. It was quite disturbing.

Libération interviewed a woman who identified herself as Fahmi B. whose path to escape was chilling:

I was in the pit, when suddenly I heard noises, like fireworks. At the time I thought it was part of the show, then I turned around and I saw a person who had just taken a bullet in the eye. She grabbed her head and collapsed. Then, everyone got on the ground, we were hearing shots. The shooters were shooting at random at people who were lying down, everyone was playing dead but it didn’t make any difference for them. I was lying in the fetal position but my feet were blocked by someone’s body. I managed to slide my feet out of my shoes and I ran backstage, because an exit was just nearby, with three other people, who were injured.

On Twitter, one man offered a heartfelt thanks to the man who saved his wife's life:

Each story is so similar, and yet so distinct. Our thoughts are with all of the victims of the Paris attacks.