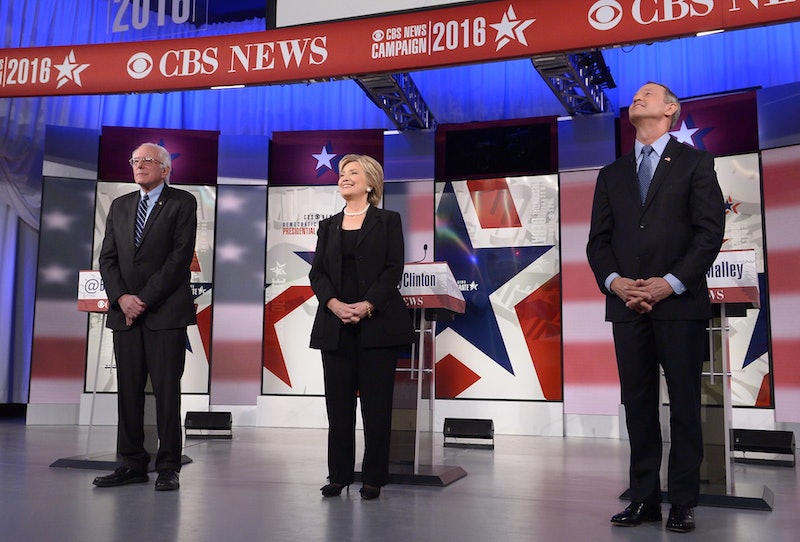 During the second Democratic debate, the three candidates squared off on foreign policy. The problem? The candidates spent too much time retrospectively discussing the war in Iraq instead of focusing on ISIS. Nearly 12 years after the 2003 invasion of Iraq, politicians continue to denounce the war — but these critiques won't solve the current fight against ISIS. What we need are clear plans for American involvement going forward, especially in light of the attacks on Paris. In response, the presidential race has turned toward a heavy emphasis on foreign and defense policy. But during the Democratic debate, the candidates appeared to put just as much emphasis on past defense measures as they did on the present.

None of the Democratic candidates want another Iraq War scenario entailing large troop commitments and a resentful public. But what's important to remember is that it is not 2003. The amount of time spent debating a decade-old issue simply distracts from time spent discussing current threats posed by ISIS. We have a new, unparalleled threat from this terrorist organization that, unlike al Qaeda, has acquired significant territory. It's time to take what the candidates learned from Iraq and apply it now. Here's what the candidates said and where they went wrong.

Bernie Sanders conveyed his thoughts on the Iraq War after discussing the impending threat of ISIS by saying, "I would argue that the disastrous invasion of Iraq, something that I strongly opposed, has unraveled the region completely."

Sanders later added: "I think that was one of the worst foreign policy blunders in the modern history of United States." It's pretty clear that Sanders was opposed to the War in Iraq, but this isn't the 2004 or even the 2008 presidential elections. The United States formally ended the occupation of Iraq in 2011, so Sanders' is making a bit of a moot point as no amount of regret will alter history. We want to know his thoughts on combating ISIS.

Sanders was also quick to tout his vote against invading Iraq to depose Saddam's regime as a contrast to Hillary Clinton's initial support of U.S. involvement. He said that the disagreement between he in Clinton was not just in her support and his opposition to the involvement, but also in that he believes the toppling of government and regime changes have "unintended consequences."

Clearly, the removal of Saddam Hussein had negative consequences like the escalation of sectarian violence. But despite ISIS's claim of statehood, it does not operate in the international order like a country, nor is it recognized as such. There is no regime to overturn. It's a non-state entity. It's difficult to understand why Sanders' brought this up in the midst of the Iraq discussion that wasn't explicitly referencing ISIS in Syria. Sanders' point simply added confusion to his already lackluster defense plan.

But Sanders' answers didn't just focus on the Iraq War; he did touch on a solution to combating ISIS that would minimize American involvement when he said, "Those Muslim countries are going to have to lead the efforts." Sanders should outline his foreign policy in greater detail so voters can fully understand his goals beyond his domestic policy.

Like Sanders, Clinton was present during the Iraq War Senate vote in 2003 and voted in favor for it, but she eventually became a steadfast opponent. Given the unpopularity Clinton has received for her vote in favor of the authorization, you'd think she'd want to avoid the Iraq War like the plague. But during the debate, she wasn't slow to address the failings of George Bush's troop removal plan during the war:

I think what happened when we abided by the agreement that George W. Bush made with the Iraqis to leave by 2011 is that an Iraqi army was left that had been trained and that was prepared to defend Iraq. Unfortunately, Nouri al-Maliki, the prime minister, set about decimating it.

Bush and Maliki are no longer in positions of power, so this should not be the focus of debate talking points. Clinton might not like the reality that resulted from their actions, but she must accept it — after all, she did vote for the war authorization. The debate's focus should have centered more about Clinton's American-led solution to ISIS, which she laid out that evening:

It cannot be contained, it must be defeated. There is no question in my mind that if we summon our resources, both our leadership resources and all of the tools at our disposal, not just military force which should be used as a last resort, but our diplomacy, our development aid, law enforcement, sharing of intelligence in a much more — open and cooperative way that we can bring people together.

This is exactly what we need to hear more of — Clinton is running for president, not George W. Bush.

Like his opponents Clinton and Sanders, Martin O'Malley used the occasion to relay the problems of the Iraq War. As the mayor of Baltimore, O'Malley was the furthest removed from the Iraq War. He had no reason to defend himself as being an opponent of the military engagement. So instead of getting the conversation back on track to ISIS, he took to point fingers at Clinton's initial support of intervening in Iraq:

[I]t was not just the invasion of Iraq which Secretary Clinton voted for and has since said was a big mistake, and indeed it was.

Pointing out who voted for the war is problematic, as it brings a decade-old issue back into the centerfold, distracting from current events. And the information that was available in 2003 and today is drastically different. Asking "what if we hadn't?" won't change a thing. History isn't a science experiment that we can run two tests to find out which method works best. We did the test, and we have our result. It's not surprising all three of the candidates want to shy away from looking hawkish given the unpopularity of the war. But now it's time to look at the present and design a new plan of action.

So what exactly is O'Malley's plan? He laid it out during the debate:

It would have been preferable had O'Malley expanded on this plan against global extremism instead of treading the waters of the Iraq War.

We must look to the future and not the past if we want to seriously address the containment and elimination of ISIS.