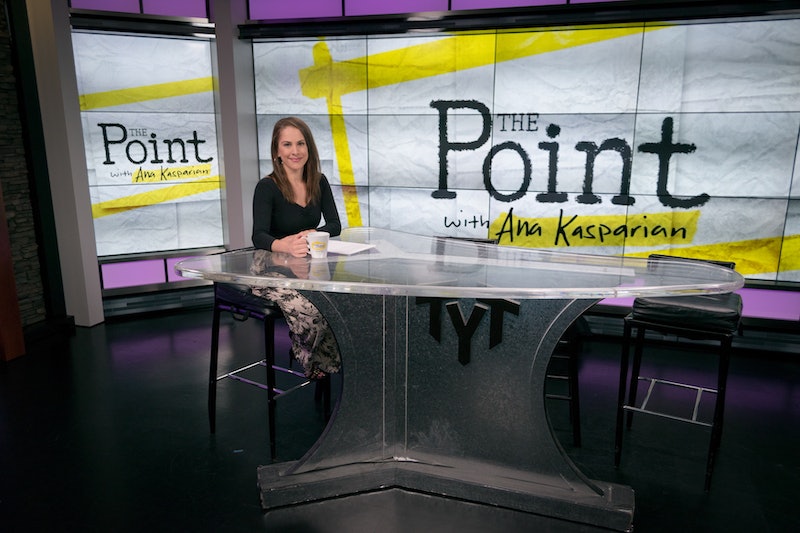 Ana Kasparian, co-host of progressive political talk show The Young Turks, has dealt with her fair share of sexism. Last year, right-wing Pastor James David Manning, who has appeared on the show a few times, responded to Kasparian calling him ignorant about his views on same-sex marriage by saying that her only contribution to the show was "her boobs and not her brains." Kasparian, who definitely calls herself a feminist, had quite the response for him.

Kasparian educated Manning in a short video for another show Kasparian hosts called The Point. She said she grew up as the child of two immigrants — her mother is Armenian and her father is Syrian — and received her master's degree in political science by age 22. "Now, Pastor Manning, I hope I led you not into temptation," Kasparian jokes in the episode of The Point where she addresses him. "But apparently you really enjoy my magnificent breasts, because you keep mentioning them over and over again in that clip. And what I found fascinating was that he was willing to let it go when it came to the criticisms Cenk [Uygur, her Young Turks co-host] made about him, but when a woman criticized him, [he said] 'Oh, hell no, you're just a twit, and you're known for your boobs and not your brain.'"

For many people who resort to sexist attacks though, Kasparian tells Bustle that even proof of a woman's brains is not enough. She says there's a strange consensus that intelligent women are not attractive and vice versa.

"Even today, a lot of the comments that I get that are well-intentioned usually say something like, 'Oh my God, she's so rare. She's hot and smart,'" Kasparian says. "And I think that's a ridiculous statement to make, even if they mean well, because there are plenty of attractive, intelligent women out there. I don't know why those two things are considered to be mutually exclusive."

Kasparian says that her strong, argument-oriented feminism was definitely something that developed over time, as a result of the way opinionated, well-spoken women are treated. For example, she says that it took her at least three years to become comfortable enough to present her arguments in an unreserved, passionate way, "because there's this pushback against women who get a little too vocal, who get a little too passionate when they're making their arguments," Kasparian says.

"If I make my arguments passionately, it's never considered passionate, it's usually just considered emotional," she says. "Whereas, if my co-host Cenk makes his arguments passionately, well then it's just passion. No one says, 'Oh, he's being emotional.' So, those are the types of weird stereotypes that we need to fight back against, because it didn't deter me from doing what I'm doing, but I'm sure it's deterred a lot of other women from doing what they're doing."

Kasparian says she received the most backlash from audience members when The Young Turks was covering domestic violence allegations against former NFL player Ray Rice. She says that she received a lot of criticism and that a lot of people were making excuses for Rice. The third-degree aggravated assault charges Rice faced after video of him hitting his then-fiancée emerged were dismissed after Rice submitted to an anger-management program and other stipulations made by a judge in May, according to NBC News.

"A lot of apologists came out of the woodwork saying, 'Hey, you know what, his wife attacked him and as a result he needed to knock her out,'" Kasparian says. "And I don't agree with that. I think there's a huge disparity in terms of their size and their strength. So, to make the statement that physical violence is OK under that circumstance is crazy. It's hard to cover those stories because it kind of reveals that there are people out there who have extreme views on issues like rape and domestic violence, and it's bothersome — to say the least."

In the Rice case, or in similar cases with musician Chris Brown, for example, Kasparian believes the issue is less about gender and more about treating famous people the same way we would treat everyone else. In 2009, Brown pleaded guilty to felony assault and making criminal threats against pop artist Rihanna, according to TIME. Brown didn't serve jail time, but he did later speak about the incident, according to the Daily Mail:

As far as she [Rihanna] and I are concerned, she knows my heart and I know her heart. I am not really focused on the negative, everything is positive for me. I did my 52 weeks of counseling and learned it was absolutely wrong.

Kasparian says that regardless of fame, prison time should be the punishment for someone who commits acts of domestic violence. She finds it disturbing that fame would give rise to so many apologists in both Brown's and Rice's case.

She has a similar approach to feminism in that she just wants equal treatment. The crux of gender equality, for Kasparian, would ensure that women and men have the same opportunities, especially in the workplace. Feminism is not telling other women what to do or what to wear, in Kasparian's opinion.

"I remember getting into a huge debate with this progressive classmate of mine, and he was irritated with me for always wearing heels," Kasparian says. "And I was like, it's none of your freaking business whether I wear heels or not. I do it because it makes me feel powerful and it makes me feel sexy. And he was like, 'No, you've been brainwashed into thinking that it makes you powerful and it makes you sexy.' So it was this weird situation where a guy who identifies as a feminist is telling me what to do."

In reality, Kasparian says, feminism should be giving women more access to their freewill. Women should be able to make decisions about their lives and their bodies without judgment from men or other women.

Kasparian says recognizing our differences is pretty important to feminism, because no two women are the same — and they don't need to be. Despite what many men's rights groups say on the Internet, which Kasparian says they use to "spew their insecurities," feminism is not evil. Both men and women should embrace feminism and opinionated women so that they can wear — or not wear — high heels whenever the heck they want.

More like this
5 Ways To Stand In Solidarity With Women In America From The UK
By Sophie McEvoy
How To Fight For Reproductive Rights, Based On How Much Time You Have
By Courtney Young
The 'Hocus Pocus' Sequel Finally Has A Release Date & It Makes Total Sense
By Shannon Barbour and Radhika Menon
Why You're Seeing Green Bandanas At Abortion Rights Protests
By Lexi Inks
Get Even More From Bustle — Sign Up For The Newsletter