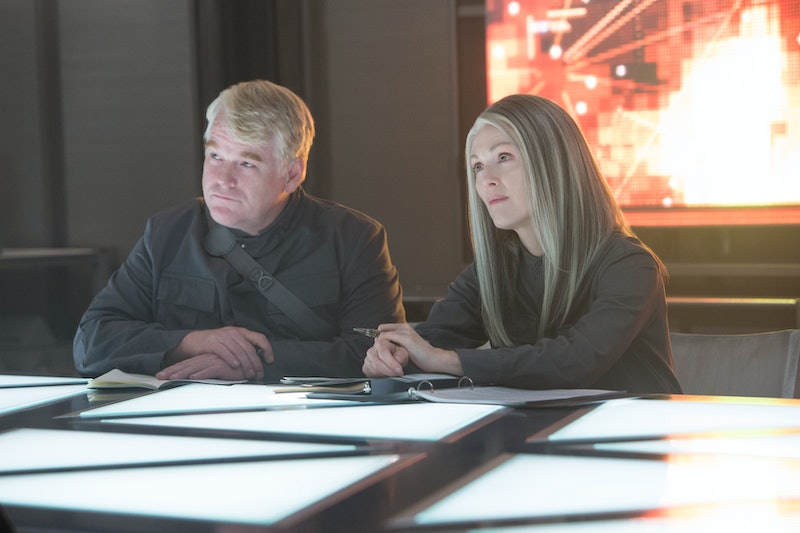 You've got to love a good 11th hour twist, especially in a series that's offered as many surprises as The Hunger Games . This is the same franchise that surprised us with a whole secret district at the end of Catching Fire, and the reveal of District 13 and the machinations behind a Second Rebellion already in progress only lead to even more moments of intrigue and reversal. Take President Coin, for instance, who comes off as a shady presence from the moment that audiences and Katniss meet her. But spoiler: Katniss will turn against President Coin in Mockingjay, Part 2, just like she does in the novel, in a jaw-dropping twist. Why does Katniss kill Coin in Mockingjay and go to such extreme lengths to rid Panem of another power-seeker, you ask? Well, Katniss knows oppression when she sees it, even when it pretends to be something else.

I like the stand-off between Katniss and Coin in both The Hunger Games novels and films. Katniss, especially in the books, is portrayed as an analytical thinker who's less emotionally demonstrative than some of the people around her. Coin has the same ability to focus her energies on victory without clouding her process with feelings. The difference, of course, is that Coin's coldness represents an actual disregard for human life. Katniss, however, has and will continue to put herself at risk to better the quality of life for every district.

Katniss learns the extent of Coin's ambition from an unlikely source in the Suzanne Collins novel. She visits former President Snow in his cell after the rebels finally take the Capitol. He'd promised once that he'd never lie to Katniss, and despite his other crimes, Katniss believes that breaking that vow would go against his twisted moral code. He has his own interpretation of two linked aerial attacks, the second one of which killed Katniss's beloved sister Prim. He tells Katniss that targeting children with double-exploding bombs (which had been developed, Katniss knows very well, by Gale and Beetee) would turn Snow's only supporters against him. He blames both his and Katniss's singlemindedness for the slip up.

Make no mistake, she was intending to take my place right from the beginning. I shouldn‘t be surprised. After all, it was Thirteen that started the rebel ion that led to the Dark Days, and then abandoned the rest of the districts when the tide turned against it. But I wasn‘t watching Coin. I was watching you, Mockingjay. And you were watching me. I‘m afraid we have both been played for fools.

The guilt trip works wonders for President Snow, at least momentarily. With Coin angling to establish a society as bad or worse as the post-First Rebellion era, Katniss believes that she is the only person standing between the leader and the people of Panem. Instead of shooting Snow through the heart with one of her arrows during his public execution, she turns at the last moment and assassinates Coin. It's just as shocking to the people who've gathered to see the show; a riot ensues, and Snow is dead by the end of it anyway, either by choking to death or being trampled.

There's nothing glorious about victory in The Hunger Games, which is why it's technically a "Young Adult" property that's found mainstream success across age groups. The Second Rebellion's triumph is messy and painful. After all Katniss has already sacrificed for her people, she ends up on trial for protecting them. But in the moment that she decides to kill Coin rather than let her assume power, Katniss isn't thinking of herself at all.