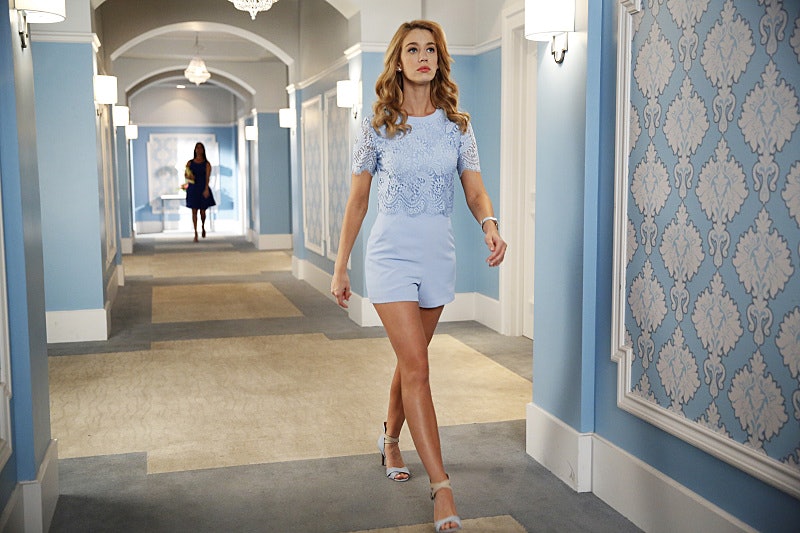 Get ready for double the trouble, everyone, because Petra is apparently having twin girls on J ane the Virgin and it's bound to come with all sorts of crazy drama. Throughout Season 2, we've seen Jane tackle the struggles that come with motherhood and that's with only raising one child. So just imagine what things will be like for Petra once her two daughters are born, especially considering that Petra is pretty much doing things on her own right now. I mean, let's face it, her mother is less of a help and more of a hindrance a majority of the time. (Magda just got out of jail and already she has a murder under her belt.) And even before Milos got arrested, he was really more concerned with selling his precious hand grenades than he was about raising a family. So this basically leaves just Rafael as the only other person Petra can turn to.

Though I'm still a strong Team Michael supporter, I can't deny how much Rafael has stepped up and impressed me in the ways of fatherhood. He truly loves his son and is more than up for the responsibilities that comes with being a parent. And given that he's a pretty decent guy, I'm sure he's going to willingly step in and assist Petra in whatever she needs — even if it means taking him away from Jane and Mateo.

Rafael and Jane's relationship made great strides throughout this episode, which introduced multiple mini-time jumps as the hour progressed. In fact, he even asked Jane out on a date after a nice Thanksgiving dinner and she said yes. Enough time had gone by for her to get over Michael and at least try to see where things will lead with her dedicated baby daddy. However, I can't help but wonder if all of this progress between these two will get upended once Petra gives birth. Double the babies might mean double the time Rafael is away from his life with Jane. So even though Petra might not be intentionally trying to come between them (for once), her bundles of joy could be just the thing to get the job done. Only time will tell.