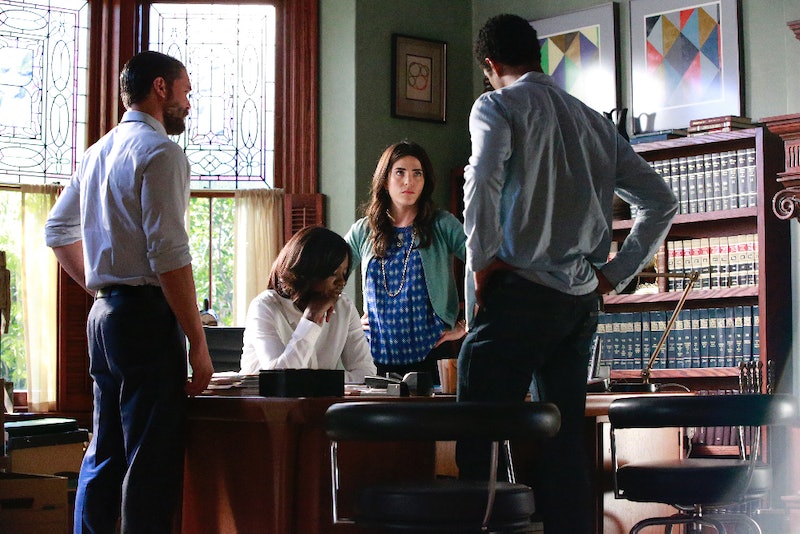 Some may say that the downside to this time of year is short days and chilly weather, but for me it's how quickly midseason finales sneak up on me, sending my favorite shows into hiatus. We may finally discover who shot Annalise Keating this Thursday, but TGIT is going on winter break. When does How To Get Away With Murder come back?

According to Entertainment Weekly, the midseason premiere of How To Get Away With Murder Season 2 is February 11, 2016. At least we'll have the Season 2 premieres of shows like Galavant and Agent Carter, or the series premiere of Uncle Buck to keep us warm on ABC, if any of those are your jam. I actually have even more bad news. Since How To Get Away With Murder is a shorter show in general, the Season 2 finale is only a month later, on March 17. How on Earth are they going to wrap everything up by then? Don't get me wrong, I think that 15 episode long seasons are a strength for this series. There isn't any extraneous information and every episode is strong.

However, for now we just have to make it through the hiatus and brace for whatever inevitable cliffhanger the midseason finale will bring. Besides Thursday's episode, which we'll all surely want to watch a handful of times, here are some episodes of How To Get Away With Murder that are worth revisiting for clues. There are multiple mysteries and multiple murder weapons at play this season, so get those notebooks out.

Whether you just want to go back and reminisce about how young and innocent the Keating Five once were (for about five minutes, it seems) or you're really desperate to prove that Wes is Annalise's secret baby, the very beginning is a very good place to start.

Again, if you want clues about Annalise and/or Wes' backstory, it might be helpful to revisit Professor Keating at her most vulnerable.

"He Deserved to Die"

Finally, his is the episode in which Wes talked to Rebecca about his mother.

The Season 1 finale, I think, is important for clues about Frank above other things. We still don't know what he owed Sam, or what his job really is at Annalise's practice.

The Season 2 premiere introduced the Hapstalls, and the second "murder night" whose pieces are almost more difficult to put together than the night Sam was killed. Let's start with the first one, which gave us a gunshot as Wes is seen running into the woods, and Annalise on the floor.

The second episode of the season showed us where Connor, Laurel and Michaela are right after Annalise was shot, and revealed that Emily Sinclair was also killed that night.

Asher and Bonnie's involvement this season has been particularly interesting and challenging for Matt McGorry's character. This episode delved into that situation, while also showing us where Frank was (the mash-up of Frank carrying both Catherine and Rebecca through the woods is worth a clarifying second viewing alone) on the night Annalise was shot, as well as the reveal that Catherine is potentially being framed for Emily Sinclair's murder.

This scene gave us a long flash forward of Connor, Michael, Laurel, and Wes (with what seems to be Levi's gun) at the Hapstall mansion. However, they're all in different groups and with different people than the scenes we've seen, so I'd definitely check it again for timeline clues.

Finally, last Thursday's episode was so stressful in the first ten minutes that I know I need to watch it again over break just with the knowledge that Oliver makes it through OK. This episode featured about three characters making death threats to Annalise in a row, so the list of suspects and potential clues grows. This episode also revealed the location of the second gun. Surely, some of these big mysteries will be solved by the How To Get Away With Murder winter finale on Thursday, but knowing this show, something will be revealed that'll have us buzzing even more.