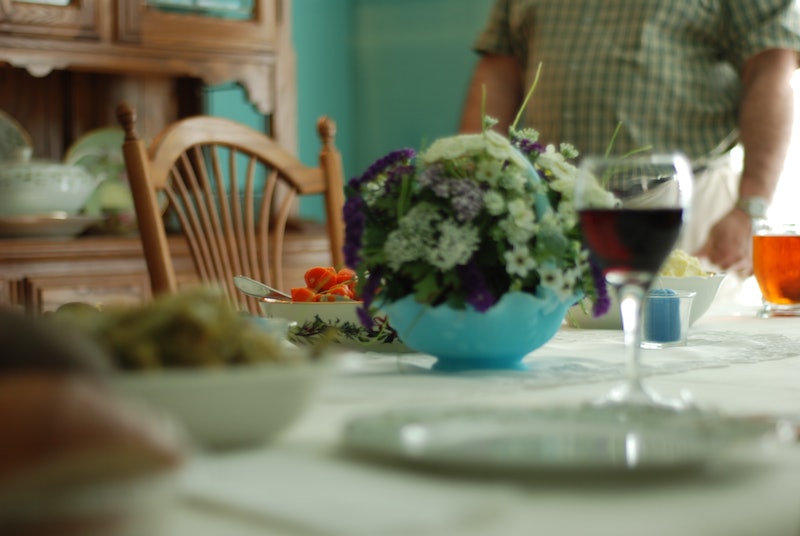 On a recent episode of Lena Dunham’s new podcast, “Women of the Hour,” gynecological nurse practitioner Lola Pellegrino told Dunham (and the rest of us) to “ruin dinner.” While Pellegrino was talking specifically about how to fight for reproductive rights, her message can be expanded to include all of the big issues we care about. This holiday season, I think we all need to seize that awkward moment around the dinner table when Uncle John says something hella slut-shamey or Auntie Rachel talks about “those people” again. Instead of sweeping it under the table so as not to make everyone uncomfortable, Pellegrino suggested that we stand up for what we believe in and ruin the dinner.

But please, please don’t let it slide. Don’t let it slide first of all because you’re going to be disappointed in yourself for it. (Trust me. I still beat myself up for the times when I didn’t call out family members for the effed up stuff they said in front of me, for fear of “ruining the dinner.”) But the other reason not to let it slide is that family dinner tables are where change is made at a really fundamental level. Even if your 90-year-old grandpa refuses to accept the fact that Caitlyn Jenner is a woman, (although don’t write off Grandpa yet — you may be surprised) there are other people at that table with you. Maybe your younger cousin who may be struggling with coming out sees that you’re an ally or your aunt who kind of thought that all those black people were making a big deal out of nothing finally understands why #AllLivesMatter is problematic. Sometimes all it takes to change people’s minds about the things that matter is one person they know explaining it eloquently.

So get ready to be that person, because here are eight ways that you can “ruin the dinner” — and simultaneously change the world.

“So if Bruce Jenner got lost, would they put his face on the side of a half and half carton??”

“Actually, her name is Caitlyn and that joke isn’t really funny. She’s not ‘half and half;’ she’s a woman. Also, did you know that the average lifespan for a trans woman of color in America is 35?”

“Yes, of course all lives matter — no one is saying that all lives don’t matter. But the point of #BlackLivesMatter is that black lives have not and continue to not be valued as much as other lives in our country. They’re trying to bring attention to the fact that black people are incarcerated, killed, and live in poverty at an astronomically higher rate than anyone else in the U.S. Hence, #BlackLivesMatter.”

“Did you see what she was wearing? What a slut.”

“I think the U.S. should shut our borders to every Muslim immigrant or else we’re going to end up like France.”

“Wait a second. Just like every Christian isn’t the Westboro Baptist Church, every Muslim is not a member of ISIS. What happened in France is horrifying but you know what’s more horrifying? Abandoning our American ideals of being the place where everyone can seek a better life by cutting off an entire religion because of the horrendous, unspeakable acts of just a few.”

“I can’t believe the gays can get married now! What's next? People marrying their pets for tax write-offs?"

“I’m pretty sure that people aren’t going into the really major life decision of legally binding themselves to another human being just for tax write offs, Uncle Joe. I think instead it’s probably for the same reasons that straight people get married — they love each other and want to commit to a life and creating a family together.”

“Ugh, did you see [female celebrity] lately? She got super fat. She looks disgusting! What a terrible role model!”

“I think she looks great! She has said that she’s really happy with her body right now, which is really all that matters. Why does being fat mean that she’s ‘disgusting’ and a ‘bad role model?’ Isn't a good role model someone who is confident in themselves, talented, and smart? She's definitely all of those things, so she's an excellent role model."

“I don’t care what anyone says. Abortion is murder.”

“If that’s the case, than almost a third of the women you know are murderers. In fact, someone at this dinner table is statistically a ‘murderer,’ if that’s what you believe. Should they be put into prison for taking charge of their own bodies? For making their own decisions about their reproductive health? I don’t think so.”

“I’m sick of this country supporting those lazy immigrants. They just come here to steal our jobs and mooch off our welfare system.”

“Do you really think they’re lazy? Let’s talk about what it takes to make the decision to leave your home country and travel thousands of miles to a place where you don’t speak the language, you can’t legally get a job, and almost everyone looks down on you. Let’s talk about the percentage of women who are raped on their way to this country — 80 percent, by the way — a risk that they know that they are taking but they take anyway because it’s really that hard to survive where they’re from. That doesn’t sound like lazy to me.”