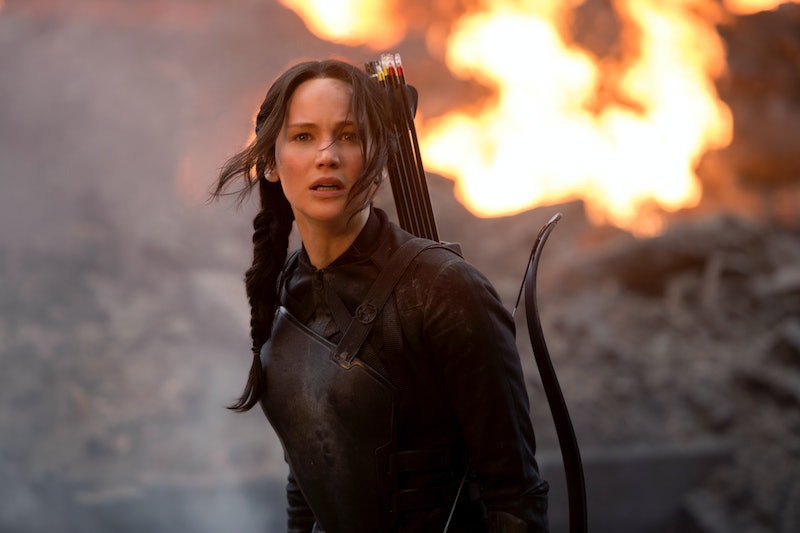 After three movies and years of anticipation, the end of the Hunger Games series is finally here. Not that that's news to celebrate, of course; I know I, for one, am devastated at the thought of no more Katniss and Peeta in my life (well, at least for now). Still, all good things have to come to an end, and so now we have the very last Games movie, out Nov. 20, to bring closure to the beloved franchise. Book lovers, at least, will be comforted to know that Mockingjay, Part 2 changes from the book only in small bits and pieces, and overall, keeps Suzanne Collins' story intact. As for how Mockingjay, Part 2 is different from the book, exactly, let me be the one to explain.

By and large, this last Hunger Games film does a pretty good job sticking to Collins' novel and telling a familiar story to readers of the books. Yet as happens in all adaptations, some changes are made, for better or for worse. Some are relatively significant, while others can basically just be ignored, but if you're a Hunger Games superfan, here's what to know about the ways in which Mockingjay, Part 2 differs from the novel.

1. Prim Comes In To Visit Peeta, Not Delly Cartwright

Instead of sending in Peeta's childhood friend to help him recover, the team chooses Prim.

2. Katniss Is Less Suspicious Of Gale

In the book, Katniss is much more uneasy about Gale's soldier attitude, but in the movie, it takes her longer to realize that he's changed drastically (or maybe she's just more distracted).

3. There's Less Violence At The Beginning

The novel has the rebels bombing cities and causing avalanches, all while Katniss watches. Although there are hints of this in the movie, it's not as graphic, and Katniss has less involvement.

4. Peeta's Recovery Is A Smaller Storyline

While it's clear in the film that Peeta slowly gets better, thanks to the work of Haymitch and others, it's not actually talked about often, like it is in the book. In the novel, for instance, Katniss learns that Peeta didn't get angry after hearing "The Hanging Tree," a sure sign that he's recovering, but this isn't included in the movie.

In a sad (but understandable) change, the scene in which Katniss realizes that Peeta's made the wedding cake for Finnick and Annie is left out of the movie. It was an important moment, as it showed that Peeta was recovering well, but it probably just took up too much time to get placement in the movie.

6. Katniss and Johanna's Friendship Is Lessened

There's no denying that these two have a bond, but the movie eliminates several of the scenes from the book in which Katniss and Johanna train together and become closer friends.

7. Katniss' Training Is All Behind-The-Scenes

In the movie, it's just assumed that Katniss knows what she's doing when she joins her unit of soldiers, while in the book, her training process is outlined in detail.

8. Peeta Joining The Unit Is Not A BFD

Unlike in the novel, where Peeta being sent to join the team causes major controversy, Peeta's arrival isn't seen as a huge deal in the movie. They aren't giving him a loaded gun, and he's being watched 24/7, so everyone's much more OK with it — if a bit nervous — than they are in the book.

9. Boggs Is The One Who Changes Katniss' Mind About Coin

Before Boggs' final plea, Katniss isn't suspicious of Coin, but after he tells her to watch out for her, she begins to think that the President might have ulterior motives. Yet in the book, Katniss has these thoughts long before Boggs dies.

Let's be honest here: in the movie, Katniss doesn't spend a whole lot of time thinking about the well-being of Prim and her mom. Sure, she loves them and is happy to see them when she can, but she doesn't, for instance, worry about her family's reactions to her being declared dead like she does in the book.

11. The Mutt Scene Is Much Scarier

Not that the mutts seem pleasant and innocent in the book, but due to the filmmakers creating a smaller, more-contained space for the mutt scene in the movie, the creatures' on-screen depiction is terrifying.

Immediately after they escape the mutts, Katniss and the team run into a woman who recognizes the Mockingjay, but in a quick reaction, Katniss shoots her with an arrow. Doesn't happen in the movie.

13. Katniss Is Less Angry At Gale About Prim

Although she's certainly not happy that he may have had a role in Prim's death, she's much less torn up about their friendship than she is in the book.

14. There Are More Scenes With Effie And Caesar

Due to the popularity of the characters and the greatness of Elizabeth Banks and Stanley Tucci, the two fan favorites both make brief appearances in the movie, despite not figuring into the book's second half.

15. Katniss Doesn't Have A Trial

Despite her trial — and her fear of being imprisoned or forced to stay alive in terrible conditions — being a big plot point in the novel, the movie jumps fairly quickly from Coin's murder to Katniss' release back into society. Haymitch says that the new president will just pardon her.

Unfortunately, due to Philip Seymour Hoffman's tragic death, Plutarch has fewer scenes in the movie than he does in the book, and some of his lines are given to other characters.

Yup. Is that canon now?

Sorry, Greasy Sae fans (are you out there?), but the woman doesn't figure into Mockingjay's on-screen story. When Katniss goes back to District 12, she's the only one taking care of herself.

Or if she does create a tribute to all her lost loved ones, it's certainly not shown on screen.

20. They Have Kids Much Sooner

The movie may not explicitly say how old Peeta and Katniss are when they have kids, but unless they age at a super-human rate, there's no way that they're 15 years older than they were for most of the movie. If they're only supposed to be few years in the future, then it makes sense that the two kids shown are much younger than they're said to be in the book.

21. There's Less Known About Their Future

The novel lays out Katniss and Peeta's future together, stating that Katniss still suffers from nightmares, Peeta has flashbacks to his time in the Capitol, and they cling to each other to make it through each day. Although the movie does say that Katniss has nightmares, the rest isn't mentioned.

So while Mockingjay, Part 2 may not keep every detail of the book intact, it's clear that by and large, Suzanne Collins' story is kept alive in its journey to the big screen.