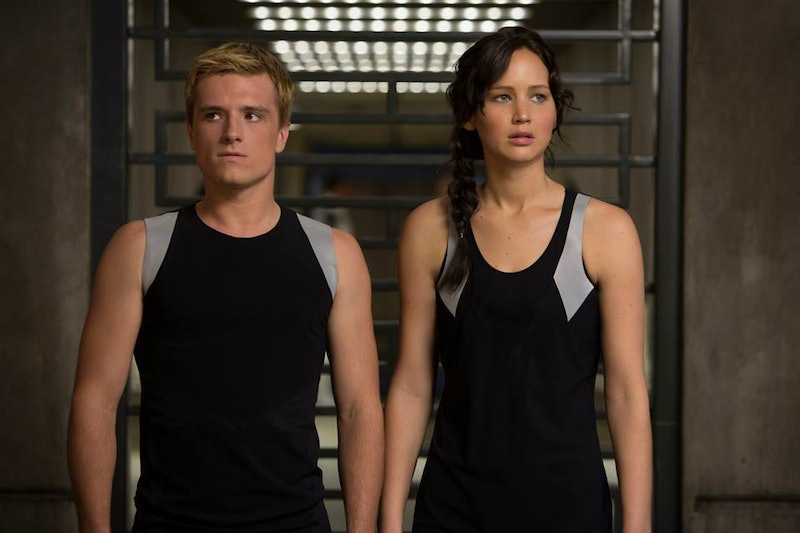 Well, guys, the time has finally come. As much as we've all tried to avoid it, there's no denying that it's here: The Hunger Games has come to its long-awaited conclusion, thanks to the release of Mockingjay, Part 1 in theaters over the weekend. After three books, four movies and seven long, crazy, chaos-filled years, it's time to say goodbye to Katniss, Peeta, Gale and the rest, and the new movie attempts to give closure to all the fans who've lived inside Suzanne Collins' world for so long. But does the movie — particularly the Mockingjay epilogue — actually succeed in accomplishing just that?

Well, that depends on what Team you consider yourself on (Hunger Games fans, you know what I'm talking about). Consider this your spoiler alert, non-book readers or people just too lazy or impatient to go see the movie; as you would expect, the Mockingjay epilogue is filled with plenty of revelations about the end of the franchise and the future of its beloved central characters. So what exactly happens during those final minutes of the latest and last Hunger Games film? Let me break it down for you, one big reveal after another.

In the book, this flash forward takes readers 15 years ahead, but in the movie, it's clear not that much time has passed. I'd say it's about three or four years, as while Katniss and Peeta have certainly aged, they still look relatively young. Speaking of those two...

Katniss And Peeta Are Together

Celebrate, those on #TeamPeeta! The movie stays true to the book and pairs Katniss with Peeta, the Boy with the Bread who'd loved her ever since long before they met in the Games. (It's said earlier in the film that Gale is elsewhere, helping secure Panem's safety.) In the epilogue, it's clear that K and P have built a life together, as shown by the fact that...

Katniss And Peeta Have Kids

Yup! The duo have two children, a toddler and an infant. In the books, the kids are said to be a bit older, but since Katniss and Peeta aren't as aged up, them having younger children makes more sense. The kids look happy and well-loved, and as Peeta plays with the toddler, it's clear being a dad suits him. As for Katniss...

Which she tells her crying baby all about (hey, each person parents differently, OK?). When she makes this revelation, it's clear to the viewer that neither she nor Peeta is truly "over" what happened in the Games, nor should they be; years of physical and psychological warfare don't just go away the moment you leave town. But it also seems that both of them are dealing with their issues in a healthy manner, and have each other to lean on when things get hard.

New "Games" Are Being Played

At the very end, Katniss tells her baby that she'll one day share the stories about what happened to her and Peeta during the Games but right now, "there are better games to play." It's a line right out of the novel.

So while it's not quite a total happy ending, it's one fitting of the ever-complicated, never-easy Hunger Games.