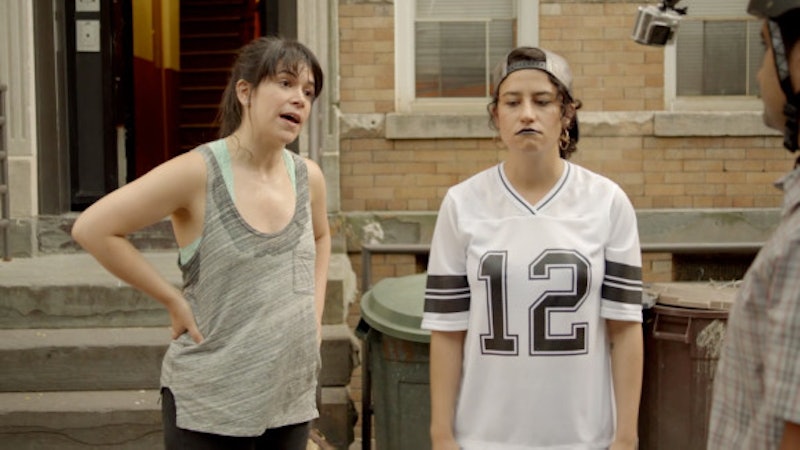 Good — no, great! — news, Broad City fans. The show just released its Season 3 Broad City premiere date, and now we all have a reason to continue on through the monotony of life until then. SplitSider reports that Broad City will return on Wednesday, Feb. 17, stating that “Broad City is coming back with a new season of 10 episodes that will see Abbi and Ilana dealing with a slew of everyday challenges and adventures as they live their lives in New York City, including a trip to the DMV, a rat in the apartment, going clubbing, taking on new job responsibilities, visiting Abbi’s dad and new hook ups." OK, all of that sounds above and beyond amazing, especially when it's inevitably going to be wrapped in Abbi and Ilana realness.

Because, honestly, there's no other show out there right now that's bringing this kind of next level humor, and perfectly resonant depiction of 20-something life, quite like Broad City. Shows like this only come around once in a while and when they do, they should be heralded for their greatness (or at least for their Bed, Bath & Beyond affinities).

We already know Season 3 is going to be amazing (how could it not, with predecessors like Seasons 1 & 2?), so here's to hoping these new "adventures" feature some of the following iconic Broad City scenes.

1. A Trip To The DMV Needs To Include An Entrance Like This

Started from Season 1, now we here.

2. A Rat In The Apartment Needs To Happen During a Glorious, Nude Lady Gaga Cover Like This

No-one, and I mean no-one, does a better feminist hero moment than Abbi and Ilana.

4. Taking On New Job Responsibilities Needs To Involve Ilana Getting High, Higher, And Highest To Achieve Ultimate Levels of Success

I mean, she invented Instagram for goodness sake. Homegirl's got ideas.

5. Abbi's Dad Needs To Feature An Awkward Run-In Scenario Like This

Maybe at Bed, Bath & Beyond?

And with that, I leave you with one final, important piece of information.

Be sure to catch Broad City on Comedy Central, come February 17.