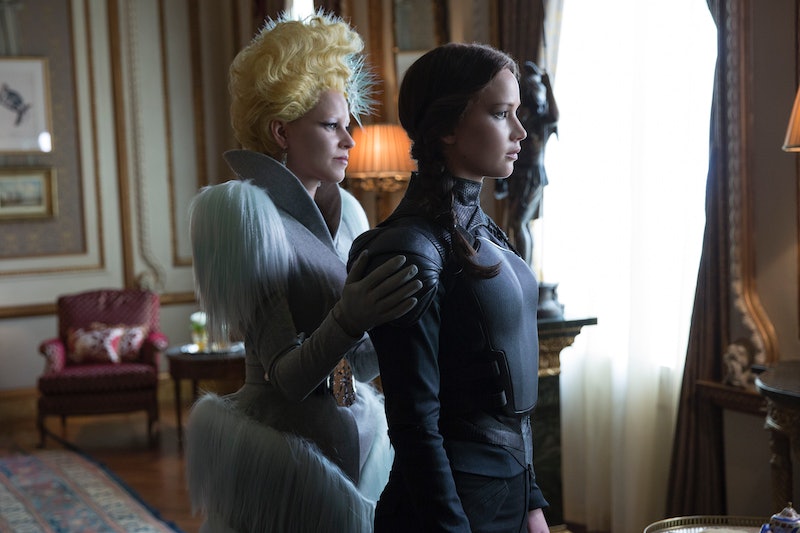 The final installment of The Hunger Games is in theaters as we speak and I'm sure diehard fans of the series are ready to scrutinize the movie. They are going to watch the movie like a hawk and compare it the book — right down to Effie's crazy eye makeup. With that in mind, how does the ending of Mockingjay Part 2 compare to the book? It leaves out some minor details, but, for the most part, the ending pays close attention to the main points of Suzanne Collins's wildly successful novel. It gives a balance of what the audience wants to see and what they need to see. (Spoilers ahead!)

First, there's the big event that everyone has been waiting for: the triangular showdown between Katniss (Jennifer Lawrence), President Snow (Donald Sutherland), and President Coin (Julianne Moore), which plays out very similarly in the book. Long story short, before Katniss is to execute Snow, he tells her that Coin has been playing them the whole time. When the Capitol falls, Coin will just take over. It will be a case of the oppressive replacing the oppressive.

Katniss is all, "Oh no she didn't!," and, at the execution, she shoots Coin instead of Snow with her trusty bow and arrow. Coin dies, and a riot breaks out in which a mob attacks Snow, leaving him for dead. This is the climax that leads to an ending that will please loyalists of the Hunger Games books and those who only watched the movies.

The book and the movie play out very similarly after the climactic execution. In fact, there aren't many glaring differences except for one that was made out of necessity. Due to the untimely death of Phillip Seymour Hoffman, many of his scenes as Plutarch that were in the book were either taken out or re-written for other actors. The main one here being a scene where he was meeting with Katniss after she killed Coin. Instead, Haymitch (Woody Harrelson) steps in and reads a letter from Plutarch.

From there, the book and movie walk hand in hand (more or less) until the end credits. Katniss goes back to Victor's Village to lay low until she is acquitted for Coin's death. As soon as she gets there, she goes back to the same routine she had when she was living in the Seam. She hunts and lives a "normal life" as she did in the first movie. That is, until Peeta comes back. No longer brainwashed, they live in peace, planting flowers, hunting birds, and baking bread. Sounds like the perfect life.

However, in the film, Haymitch comes back to Victor's Village. He hangs out with the couple, and they even have a session of scrapbooking, where they create a book of stories about the Hunger Games and the past tributes. The book gives updates on the characters in text, while the movie tells us in a letter sent to Katniss and Peeta: Gale is working for the Capitol now, Katniss's mom has moved to District 4, and Annie gave birth to Finnick's baby.

In the end, Katniss crawls into bed with Peeta in the middle of the night. He asks Katniss, "You love me, real or not real?" She says "real" — just like in the book. This is followed by an epilogue, where we see Peeta and Katniss playing with their two children in a meadow. Obviously, it is years later. The movie doesn't tell us exactly how many years, but the book tells us this heartwarming even takes place more than 15 years later.

Despite what naysayers might say, Mockingjay Part 2 proves that the movie can be just as good as the book, even if you make a few changes along the way.