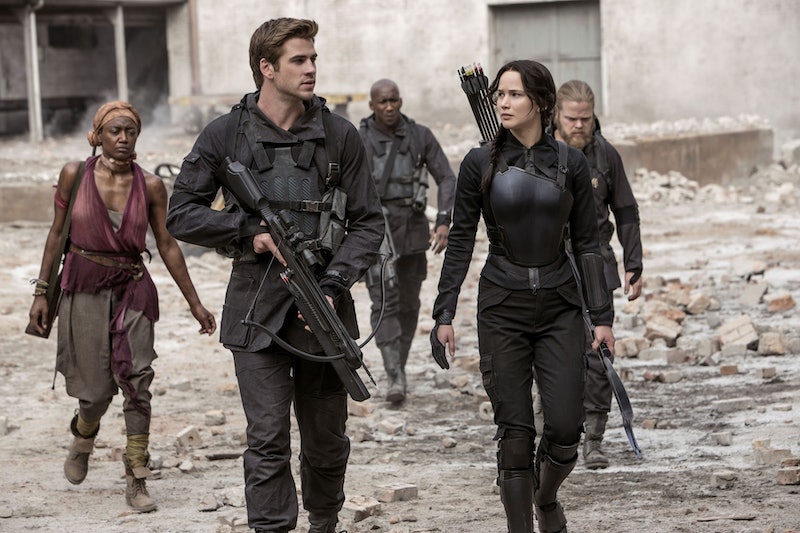 Mockingjay, Part 2, the final film in The Hunger Games franchise, provides as satisfying an ending to a rather grim story as it can. The third novel in Suzanne Collins’ trilogy is generally considered the weakest of the series, as the first person narration that made the first two books so engaging became a problem throughout the story's final pieces. But the films have always circumvented that issue, and Mockingjay 's two installments, in particular, were able to embrace action scenes and sequences that the books only otherwise mentioned off-screen, making for a more involved story. But The Hunger Games: Mockingjay, Part 2 comes along at a trying time in our world, and while it's a good movie and a satisfying conclusion to the series, it's unfortunately tough to watch.

As I viewed the film, every gunshot, every explosion, and every scream reminded me of our current situation. The world is on edge after the recent tragic terrorist events in Paris and Beirut, and with ISIS taking responsibility for those as well as the bombing of a Russian plane full of innocent tourists, the world is sadly edging towards even more war. While in the grand scheme of humanity, this planet has rarely known a time when one country or religion wasn’t fighting another, it’s still difficult to engage in your usual comforts and entertainments when people have experienced such atrocities so recently, especially when one of those pleasures is Mockingjay, a movie that captures similar tragedies so vividly.

While sci-fi has always been enamored with dystopian futures, many recent stories, like The Hunger Games franchise, have provided a particularly dour outlook on the coming years. And thanks to its unfortunate timing, Mockingjay, Part 2 manages to hit nerves that have only recently become exposed. As our leaders strategize on terrorism, refugees, and religious ideologies in the real world, Katniss and Panem do the same in their fictional Panem. In one powerful scene, soldier Gale (Liam Hemsworth) explains the rebellion's plans has for attacking the Capitol, and Katniss (Jennifer Lawrence) is taken aback by his calm acceptance of killing innocent civilians. “I guess there are no rules now about what a person can do to another person,” she says. Gale responds that even if citizens of the Capitol are mopping floors, they’re a part of the problem, but Katniss is unconvinced. “You can kill anyone with that thinking,” she replies, “even send them to the Hunger Games.”

It's an eerie statement, but sadly, a realistic one. Our future is supposed to be brighter than this; we’re supposed to resolve our conflicts, end poverty, live in peace and prosperity. I've always longed for the futuristic setting of the Star Trek series of TV shows and films, in which the humans of Earth have solved their conflicts and moved past their differences before engaging in peaceful negotiation with alien species, only defending themselves when absolutely necessary. If only today’s glance into the future, whether in real life or the world of film, was so hopeful.

But perhaps The Hunger Games achieves something that we have not. Unlike many Westerners who rashly call for revenge, bomb raids, or even the elimination of Islam in the U.S., Katniss can admit to herself that there are no winners in war. Despite their appearance as the "enemy," the citizens of the Capitol are just as much victims of their oppressor as the rebels. When the rebellion attacks one of the mines on the outskirts of the Capitol, Katniss is attacked by one of the traumatized and desperate miners, but she understands his reality. “We blew up your mine. You destroyed my district... it just goes around and around, and who wins? Not us. Not the districts. Always the Capitol." Later, Johanna (Jena Malone) adds to the dark conversation when she states, “Anybody can kill anybody, even a President. You just have to be willing to sacrifice yourself.”

And just like in our world, the media plays an important part in The Hunger Games . Katniss wants to sneak into the Capitol mansion and kill President Snow herself, but her ever-present propaganda film crew follows, capturing her heroics to bolster support for her cause. In reality, it’s now inevitable that every attack, raid, or bombing is relayed via live Tweeting, with cable news channels devoting their 24-hour cycles to endless coverage. And while it’s important to be informed, there's a fine line between news and propaganda. As Katniss and her team make their way through the rubble of the Capitol, the similarities to the images out of a devastated Syria shown over the past few years are disturbingly on point. And when Snow takes to the airways to declare, "The enemy isn’t like us, they don’t share our values,” it’s hard not to picture any newscaster, pundit, or politician who continues to uphold the biased "us vs. them" mantra that we hear so often.

There was no way for the filmmakers, stars, or fans to know during the making of Mockingjay, Part 2 that the movie would end up premiering at a time when the world is still reeling from recent attacks. But perhaps it's a hint at what's to come; countless pieces of science fiction, including Star Trek, have imagined variations on a World War III that takes place in the mid-21st Century and leaves Earth devastated. As a species, we sometimes learn from the past, but all too rarely. We may not know exactly what our future brings, but as Plutarch says to Katniss near the end of Mockingjay, Part 2, “We’re a fickle, stupid people with poor memories.”