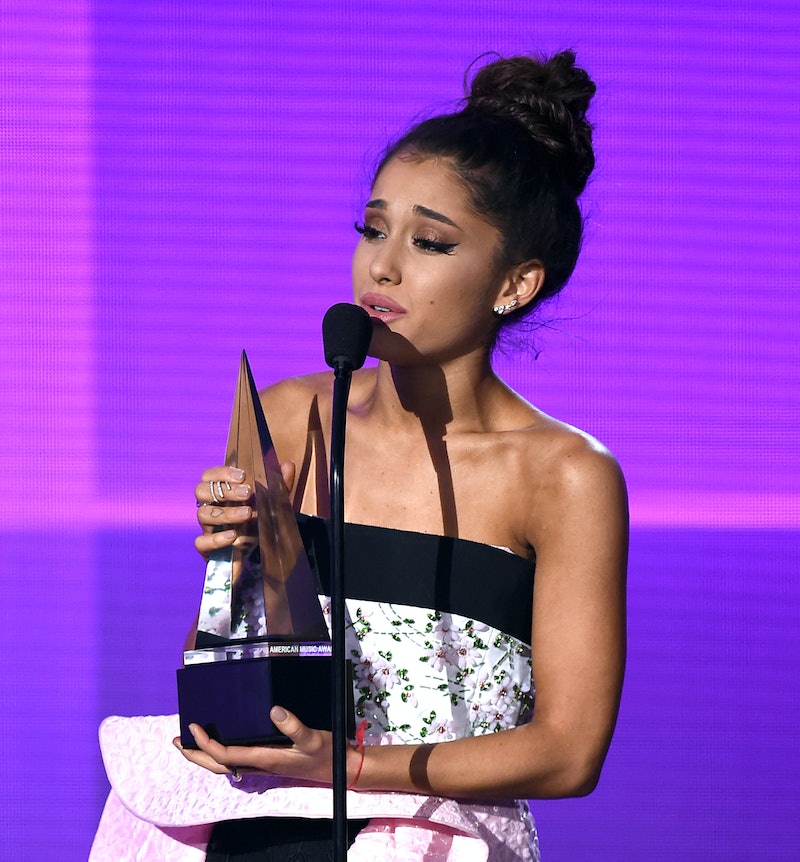 So much happened at this year's American Music Awards! From Gigi Hadid's (faux) bob haircut to Justin Bieber's emotional performance, it was certainly a memorable night. But perhaps the most important part of the entire evening? Ariana Grande brought her Nonna as her date at the AMAs and it was absolutely precious. Since the "Focus" singer has been adamant before about how she doesn't want to be defined by who she dates, this really was the perfect choice. Romantic relationships come and go, but at the end of the day, your grandma is always there for support. Proving just how strong their bond is, Grande thanked Nona in her acceptance speech for Favorite Pop/Rock Female Artist. She told the crowd,

I think I owe a lot of this to my Nonna, who made sure to remind me that she voted. She goes, "Ariana, I went on the computer. I voted, so I think you'll win."

How cute is that? Making the entire situation all the more precious, after the show, Grande read her grandmother tweets and headlines about herself. Apparently Nonna couldn't believe her newfound fame! Although let's be real, all of the attention is definitely well-deserved. Grande even dubbed the situation #NonnasBigNight.

Clearly Nonna is an important person in Ariana Grande's life, and this isn't the only time she had major influence. Here's a list of Nonna's most memorable moments.

1. Basking In Her AMAs Fame

When she was called "the life of the AMAs," Nonna said she felt wonderful. Super cute!

Looks like Nonna isn't a stranger to award shows. She also accompanied her granddaughter to the 2014 MTV Video Music Awards.

3. Dancing In The Car

Here's a video of Nonna dancing along to "Bang Bang" in the car, and it's as great as you'd expect.

In the "Focus" video, Ariana Grande's white hair was inspired by Nonna. In an interview with Entertainment Tonight, the singer said, "I wanted to do my ponytail in white for a while, or in a different color. I actually was sitting opposite my Nonna and I was like, 'Nonna, I love your white hair. It's so beautiful.'"

Grande shared this vintage photo of her grandma, who she dubbed "Queen Marjie." A fitting title, for sure.

6. Celebrating Her Birthday In Style

Nonna recently turned 90, but celebrated like a boss. Grande posted photos of Nonna's birthday balloons. Of course they took adorable photos together too.

Wherever Grande's grandma goes, she continues to steal the spotlight. Enjoy your newfound fame, Nonna! You deserve it.