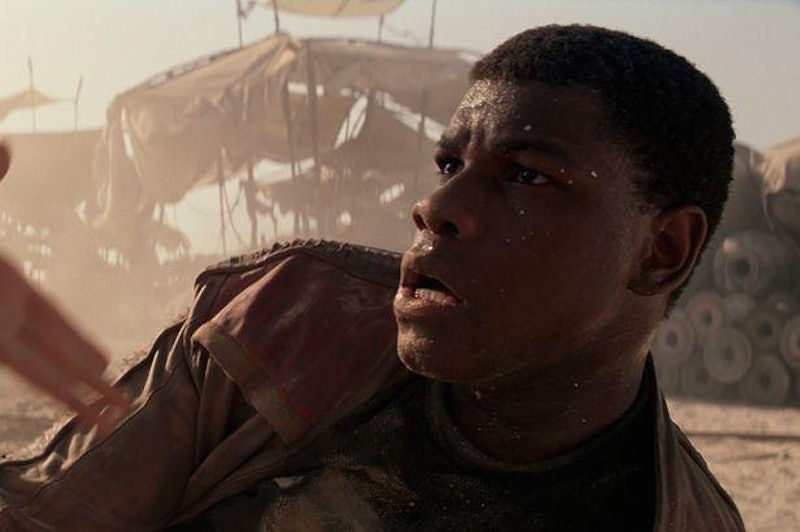 Now that The Hunger Games: Mockingjay Part 1 has made its debut in theaters, there are no movies left to talk about this year other than the new Star Wars. OK, that's not true, but it feels like that sometimes. John Boyega is Finn in Star Wars: The Force Awakens, one of several brand new characters to go along with returning favorites like Han Solo, Princess Leia, and Luke Skywalker, and it remains to be seen whether or not he'll be able to reach the same iconic status in Star Wars lore as his co-stars. But what do fans even know about Finn so far?

For starters, the name of the character is just Finn. No last name, just "Finn". Like "Cher". But Finn doesn't go by just one name because he's a diva. In fact, he may have a last name — it just hasn't been revealed. Director J.J. Abrams has stated that there is a reason why Finn's surname has not been revealed, and fans speculate it's because he's the offspring of another known character (like one of the three I already mentioned). So besides his name, what else do fans know about Finn?

Or at least he starts out as one. In the Force Awakens trailer, Finn says he was "raised to do one thing", but now has "nothing to fight for". During his voiceover, a tie fighter is seen crashing on the desert planet Jakku, where we know Finn becomes stranded and meets Rey. Most fans believe Finn is talking in the trailer about being raised to be a Stormtrooper, but after his crash he's lost in life. It's at this time where many think he'll discover his destiny and become a good guy.

He Teams Up With Some Allies

So far, it's been revealed that Finn joins forces with at least Rey, Poe Dameron, and Han Solo to take on the First Order, who have taken over the role from the Empire as the Star Wars universe's resident bad guys. So despite his evil origins, look for Finn to go full hero in The Force Awakens.

One secret the film hasn't been shy about unveiling is that Finn wields a lightsaber throughout the film; one that's believed to have once belonged to Luke Skywalker, and Anakin before him. Only a Jedi (or a Sith) should be able to use it, and Finn is seen showing some prowess with it in multiple clips, so it's unlikely that he just picks it up randomly and starts swinging it around. Odds are that the force is strong in him, and he may be the awakening the film's title is referring to.

The movie's big baddie is Kylo Ren, a Darth Vader fanatic, and Finn has a lightsaber battle with him in a snowy forest at one point. All signs indicate that it's going to be amazing.

He Rides The Millennium Falcon

A recent TV spot appears to show Finn taking control of the guns aboard Solo's iconic ship, with Rey in the pilot seat. Where Solo is is anyone's guess.

He's Not Super Cool Under Pressure

The film looks like it's going to be a journey for Finn, since the would be-hero seems pretty unsure of himself in several clips. In one TV spot, Solo asks, "You sure you're up for this?" and Finn replies, "Hell no." In the same ad, he's making the case that they should all run, presumably instead of fight. And finally in the above clip, he's borderline freaking out while Rey takes on more of a leadership role under enemy fire.

That's pretty much all that's been revealed about John Boyega's Finn so far, but that's intentional on the part of Disney, who are keeping things close to the chest when it comes to what might be the biggest movie of all time. So far though, Finn looks like he's going to be pretty awesome, and should rightfully earn his place alongside the Leias and Lukes of the world.