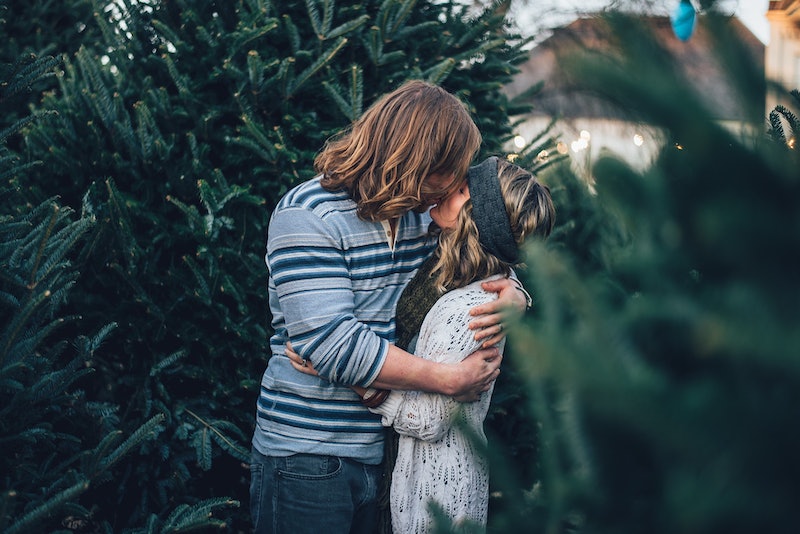 Sometimes I think it's amazing that a couple communicates well at all, considering how many barriers there are to communication. Everything from our backgrounds and the way we were raised to think about expressing ourselves to the mood we're in to our own personal thoughts on constructive communication come into play, sometimes rendering a simple conversation incredibly complicated. How to communicate well with your partner is the age-old question of relationships, and experts have lots of different takes on the riddle.

Overall, couples who communicate well have this one thing in common: They are "active listeners," Janet Zinn, a New York City–based couples therapist, tells Bustle. "[They] listen to what their partner says, rather than get defensive without understanding the partner’s point of view or where they’re coming from," she says. So if a woman asks her partner if they want to go out to dinner tonight, an active listener would respond, "What did you have in mind?” or "I’d love to, is Italian good?" says Zinn.

"If they are not active listeners," says Zinn, the response might be something totally left-field, such as, "You always want to go for a burger, why can't we go somewhere I want to go?" Cue a fight, she says: Instead of going out for a nice dinner, the woman is put on the defense, and might say something like, "I only asked you if you wanted to go out. What do you want from me? Forget it," says Zinn.

"Active listeners respond to what is said," she says. Poor communication happens when you make it about something else. And that's when disasters happen. Keep things focused, and respond to the topic at hand to remain an active listener, and you'll have a way higher chance of avoiding misunderstandings. Here, Zinn reveals more about active listening and how it can save your relationship.

You Can Learn To Be An Active Listener

"There are specific exercises to learn," says Zinn. Though there are plenty out there, one easy one is to repeat what the partner says, she says. For example, perhaps your partner says, “You never want to go out, and I love to get dressed up and go out," says Zinn. To actively respond to this, reflect back to your partner what you heard them say. Perhaps you might respond, "You said, 'I never go out,'" Zinn says. But maybe that wasn't quite what your partner meant. "Then she repeats what she said," Zinn says, and you get the chance to repeat it back to her. "This way you each find out how you hear things, and can learn to hear what’s being said, rather than what you pick up." If your response is wildly different from what they thought they said, there's a disconnect in communication — and you get to work on it together.

Active Listening Can Save Relationships

"I’ve absolutely seen couples save a relationship using active listening," says Zinn. This is, at least in part, because it's so easy to get off base with what you think your partner is saying in comparison to what they're actually saying, or vice versa — you might think you're saying one thing, only to find out that your partner is hearing something totally different. "[Active listening] adds compassion for one another in the relationship, which is key to healing a relationship," she says.

In an argument, two active listeners take turns speaking, Zinn says. If you're already doing this in fights with your partner, congrats: You're well on your way to active listening. It's not just about taking turns, though: Active listeners also repeat what the other says throughout the argument, she says. "For example, 'You said that I never clean up after myself in the bathroom. I can see how that’s frustrating. I want to give you a chance to get into the bathroom, so I leave the mess for later.” By adding compassion and also a reason for the behavior, you're telling your partner that you hear them.

"In this way, there’s more understanding," Zinn says. If you and your partner actively listen to each other, you also feel safe while an argument is unfolding, since "another component to the fighting is that there is a presumption that the partner [who is upset] has some merit in what they are saying," she says. Instead of automatically assuming that your partner is "wrong" when they bring up an issue, an active listener understands that there is truth in what the other person is saying and that they aren't just fighting for the sake of fighting. This assuages hurt feelings and allows for arguments to happen and then pass, like a summer storm, rather than lingering all day long. The partner who is upset doesn’t feel completely negated, she says, and feels heard.

Even If You're An Active Listener, Things Can Still Go Wrong

Active listeners can err on the side of anxious. "There can be over-communication when some things could just be let alone," says Zinn. "For instance, if one partner wants to go to the movies and one wants to stay home and watch TV, it doesn’t have to be a 20 minute discourse on why they want different things." They can just kiss goodbye and settle in to their separate nights. "Of course, if there’s another issue that shows up in this way, then a discussion may be in order," she adds. If your partner's feelings are super hurt that you don't want to join them at the movies, then by all means, have a discussion — and a round of active listening. It's just not necessary to discuss every decision ad infinitum if both people are satisfied with the arrangement.

Defensive Partners Can Learn To Be Active Listeners

It sounds to me like active listeners are inherently non-defensive, so I asked Zinn how to soften a defensive partner, or bypass their defensiveness to achieve better active listening. If you're dealing with a partner who can be defensive, what can you do to get around that and encourage them to become a better active listener? "First," she says, "we want to find out what makes them defensive. It may be that it’s an old issue, and can be addressed in individual therapy."

Often old defensiveness has nothing to do with a current partner, and it's best to not take your partner's defensiveness seriously, even if it's really, really tempting to do so. "Or it may be that one partner is more blaming, and then that can be softened and the partner can work on being open, so that it doesn’t elicit defensiveness."

Not rocket science, but a good reminder: If you naturally find yourself blaming your partner for things, they're going to naturally be defensive. "Finding out why we get defensive and bringing understanding and compassion to that allows us to be less defensive, and moves us towards active listening," Zinn says. And then you get to join the ranks of couples who communicate well. Score!