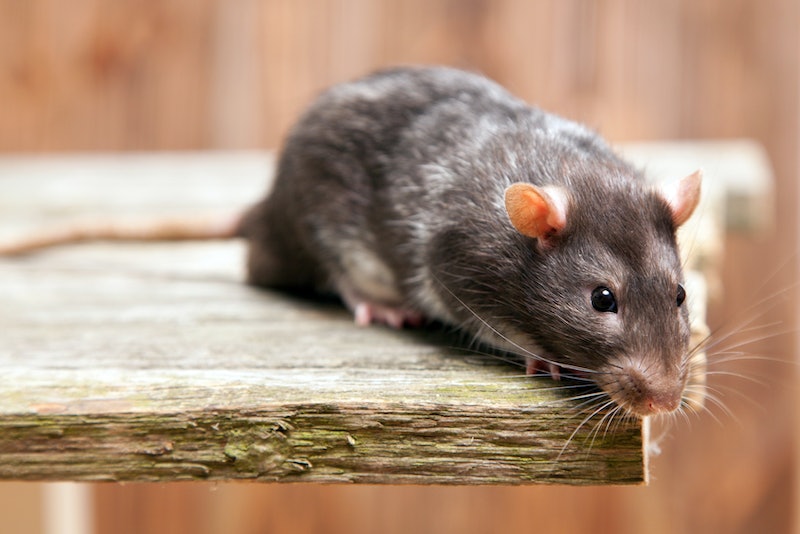 If you're afraid of creepy crawly things, you might not want to read this article. Just click that little X in the upper right hand corner and read something else on Bustle, instead. Maybe our thoughts on whether or not Jon Snow is alive on Game of Thrones? No? OK. If you insist, here goes nothing: so apparently, rats who take selfies exist. No, seriously — a video just surfaced showing what looks like a rat crawling on a man sleeping in a New York City subway station... and taking a selfie on the man's phone.

The horrific news comes to us from Fox 61, which reports that a Connecticut tourist filmed the encounter on his phone. According to the man who captured this event on video, the rat crawled up the sleeping man and activated the camera in his lap. The flash from the camera was what woke the terrified man up and made him notice the rat. Later, he noticed the selfie from the rat on his phone, and shared the photo with the man taking video of the incident on his phone.

Here's a look at how it all went down:

So this is probably a hoax, right? Like, every single person I've showed this video to is like, "This is a hoax." How likely is it, for instance, that the rat happened to wander on a sleeping man with his phone out and unlocked and in camera mode? But I want to believe! And honestly, is this actually more unlikely than two people training a domestic rodent to crawl on someone in a subway station?

Only time will tell if this rat ends up being as popular as Pizza Rat (who, I imagine, is having an angry phone call with his manager right now). So far, the selfie-taking rat hasn't been picked up by Twitter comedians in the same way that Pizza Rat was... but it might only be a matter of time. Maybe, though, Pizza Rat and Selfie Rat should band up instead of feuding. After all, if this isn't a hoax, these two videos do show something I've always believed: that New York City has the smartest, boldest rats in the entire world. Suck on it, Boston rats! The last shot of The Departed is cheesy!