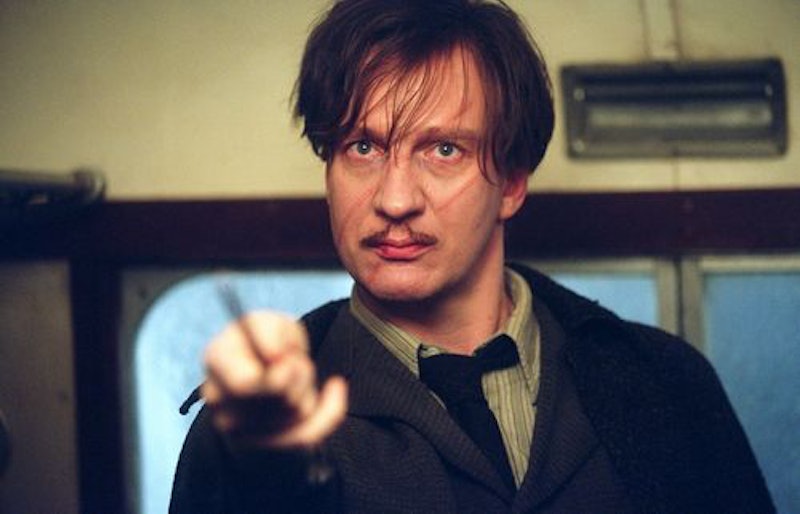 I have always loved former Defense Against the Dark Arts professor and professional werewolf Remus Lupin. Since I was little, I've cheered for him whenever he made an appearance in the book, and I was pretty happy to see how he turned out in the films. There's something about Lupin that makes him particularly special. He probably has one of the most tragic storylines out of all of the characters in the series: poor kid is attacked by a terrifying monster solely because of something is father did, contracting a horrible disease that makes him an outcast from society. When he first finds friendship, it only lasts for a few years until everyone either dies, gets arrested, or fakes their own death. When he finally gets his old friend back, develops a relationship with his dead friend's son, and earns the love of a beautiful woman (who later has his son) what happens to him? Spoiler alert: He dies.

Now, I've written about underrated characters and overrated characters in the past, we've discussed how great Luna Lovegood is, and of course the wonders of Hermione. But Lupin deserves his day in the sun, and to celebrate him, I've compiled seven reasons why Remus John Lupin is the actual best character in Harry Potter. Some of these reasons might be silly, but they are all good and true.

1. He Carries Chocolate Wherever He Goes

That is a man after my own heart. Sure, he carries chocolate around due to it being a good treatment against dementors, and maybe he only had the chocolate on the Hogwarts Express because dementors would be patrolling the train, but that's not my truth. The truth is that although Remus Lupin barely had two sickles to rub together, he still managed to buy a slab of the best chocolate Honeydukes made. That makes him a man committed not only to quality, but to the happiness of the people around him. Well done, Remus!

2. He Brings Out Harry's Potential

Can you remember a time when Harry wasn't awesome at Defense Against the Dark Arts? I do, it was in the first two books, and that was because he hadn't met Professor Lupin yet. Lupin didn't just ignite Harry's passion for DADA, he did it to an entire class of students, most of them declaring later that Lupin was the only Defense Against the Dark Arts teacher that actually taught them well — if you don't count the Death Eater masquerading as an Auror. Lupin also taught Harry the wonders of expecto patronum, something that saved Harry's life on more than one occasion. Would Harry have even wanted to be an Auror if Lupin had never taught at Hogwarts? We'll never know, thank goodness.

3. He Was a Marauder, But Not a Complete Jerk About It

This one might be a little inflammatory, but let's all be real with each other: In their Hogwarts heyday, Marauders were total jerks. James and Sirius would randomly pick on Snape whenever they got bored, Peter Pettigrew was basically just happy to be around all the popular guys. And then there was Lupin. In spite of his lycanthropy he still got awesome grades and was even made a prefect. Sure, it was all an attempt to keep the rest of his friends in line, and he sort of failed at it, but he never stooped to the level of his friends. It still didn't win him any favors with Snape, but really, what could?

4. He Probably Participated In an Underground Werewolf Fight Club

Remember that part in Harry Potter and the Deathly Hallows when Lupin went underground to try to get other werewolves on the side of Dumbledore, but they were all too afraid of Fenrir Greyback and Voldemort to do anything? There is absolutely no way that it didn't devolve into some awesome werewolf fight club, and I think that should be appreciated more. In all seriousness, though, he spent his entire life feeling completely unworthy and unclean, undeserving of love or respect, and yet he still put those terrible feelings aside to wade deep into the very thing that frightened him the most in order to help the cause. He truly was a Gryffindor, indeed.

5. He Is Low-Key Awesome at Magic.

When you think about powerful witches and wizards from the Harry Potter universe, you probably think about Dumbledore or Hermione, but why not Lupin? In spite of his "furry little problem", Lupin was clearly a gifted wizard. He was fully able to summon a corporeal patronus (which despite the fact that 13-year-old Harry can do it, it is still supposed to be advanced magic). This magical badass can do non-verbal and wandless magic, helped develop the super magical Marauder's Map as a teenager, and probably put up a heck of a fight dueling Anton Dolohov during the Battle of Hogwarts. However, does he ever complain about the fact that his condition makes him nigh un-hireable even though he is pretty much good at anything? No. Remus Lupin is a classy man.

6. His Name Is Basically "Wolf McWolf"

Remus is a figure from Greek mythology, as one of the twin founders of Rome he was raised by a she-wolf for a while. Meanwhile, Lupin comes from the latin word for "wolf." So basically Remus' name is "wolf wolf," and I think that's completely awesome.

7. He Was the Best DADA Teacher Ever

The Defense Against the Dark Arts teaching position had always been considered to be cursed, and yet did Lupin back down from that? Nope. Instead he engaged his students on a practical and interesting level, not only teaching them how to protect themselves, but helping them become their best selves. When Snape was openly a jerk to Neville in the middle of Lupin's lesson on boggarts, did Lupin back down and allow that nonsense to stand? No he didn't. Instead he took Neville's fear and made it into a teaching moment, helping him conquer not only the boggart, but his own terror of Snape. His final exam was an obstacle course for pete's sake. He's the kind of teacher we all wished he could have, and the kind of teacher all teachers should want to be.