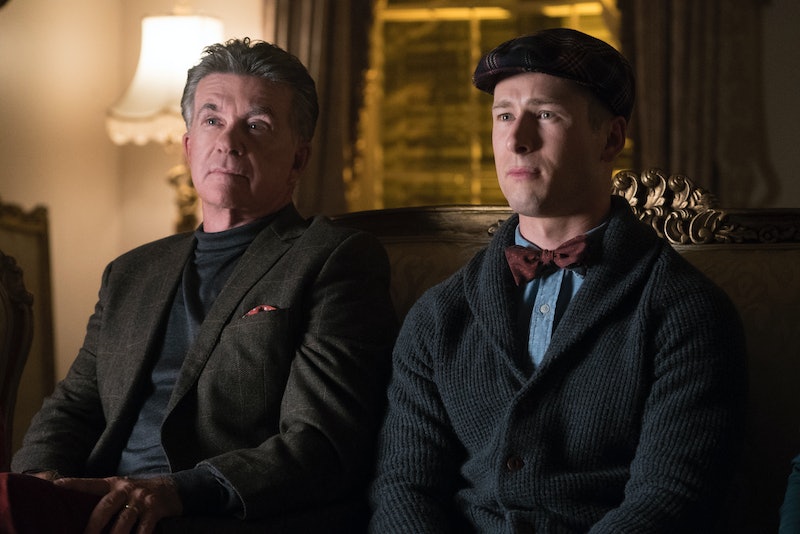 Thanksgiving is a time for turkey, giving thanks, and spending time with family. But, for fans of Scream Queens, the wholesome holiday brings us closer to revealing who the Kappa Kappa Tau-murdering Red Devil killer really is. There has been some speculation that the beloved pastel-wearing Dickie Dollar Scholar president Chad Radwell might be a cold-blooded murderer on Scream Queens. However, with the revelation last week that Boone is (or, was, #RIPBoone) one of the Red Devils working with Gigi, there theories that Chad Radwell could be a red herring, not a killer.

Before Boone was revealed to be the Red Devil in love with Zayday, and since the other was presumed to be a girl, Chad was a pretty solid candidate for one of the killers because of his completely suspicious behavior. The biggest indicator that really can't be ignored is Chad's strange fascination with death and according to him, "The only time I feel anything is when I'm thinking of chopping up a body." That sounds like serial killer 101 to me. Plus, he has faced the Red Devils before and lived to tell the tale — there aren't many people on Scream Queens that can say the same (although, Dean Munsch holds the record for going toe to toe with two Red Devils and Gigi in a Supreme Court Justice Antonin Scalia mask). So, it seemed pretty obvious Chad was either the Red Devil or in #cahoots with the killers.

But, we now know that one of the Red Devils is Boone, who was one of the two babies in the Kappa bathtub, and the other is presumably the girl baby. Because of this, as well as Chad's surprise at seeing Boone alive, it seems clear that all the signs pointing to Chad being the Red Devil killer were red herrings. However, if Chad isn't one of the killers, that means he could be next on the real killer's hit list. Theories about the identity of the other Red Devil point to everyone except Chad, including Hester aka Chanel #6. Reddit user crashley_bandicoot believes Hester's fall down the stairs righted her spine instead of killing her, leading me to believe she could still be alive and have nefarious intentions for my favorite Dickie Dollar Scholar.

Hester made it incredibly clear in "Ghost Stories" that she will go to any lengths to steal Chad away from Chanel, even so far as faking a pregnancy. So, she's really only a small step to "If I can't have you, no one can" crazed stalker territory. If she is still alive, and if she's the other Red Devil killer (who, can we talk about this for a sec, is totally okay with murdering their own brother!), then Chad might be her next target for taking Chanel to Thanksgiving at the Radwell's haunted house in the Hamptons. Of course, even if the killer does attend the Radwell's Thanksgiving and tries to murder Chad, he's faced the Red Devils before so there's a possibility he could make it out alive — again.

Of course, this is Scream Queens, and I don't think anyone can truly see all the twists coming from the mind of Ryan Murphy. Maybe Chad looking like a red herring is a red herring itself! Maybe the other Red Devil isn't a girl! Maybe Chad is the killer! The possibilities for big surprises and shocking twists are endless in this show and there's only one thing I can be sure of: I will be heartbroken if Chad "Panty Raid" Radwell dies on Scream Queens.