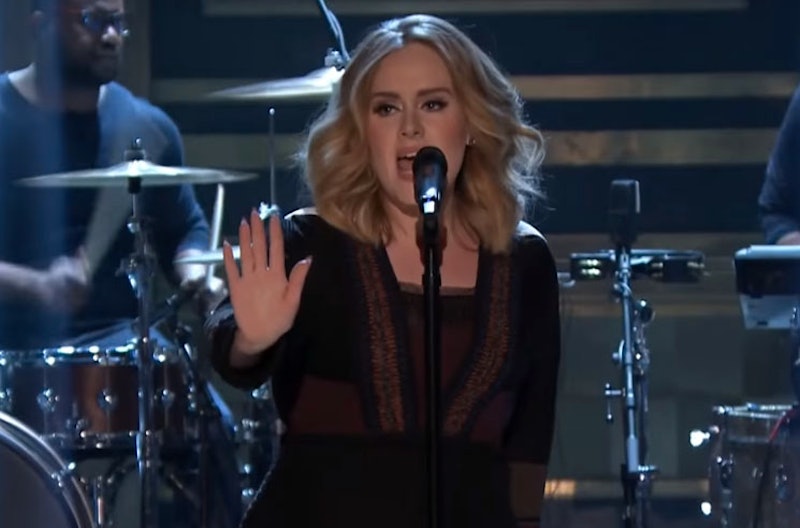 Adele has officially taken over. On Monday night, the songstress made a visit to The Tonight Show Starring Jimmy Fallon, and Adele performed "Water Under the Bridge," a single from her new album, 25. Adele, who has just returned after taking a break for four (sad) years, has just proved that she's not only back, she's bigger than ever. What's that saying? Absence makes the artist grow into a living legend? Something like that.

Performing one of the more upbeat songs from the new album, Adele has let her hair down, literally and figuratively. After all her live performances this year (she's just performed "Hello" and "When We Were Young" on SNL over the weekend), it's become clear that Adele, like any artist that evolves in the spotlight, has reached an apex. But it's this performance, specifically, that has solidified her spot as queen. Her voice has never been more lucid, and her presence never more confident. This performance isn't a late-night talk show appearance to promote her new album; this is a one-on-one Adele concert.

Because that's what she makes it feel like: Inclusive, personal, and honestly, above all else, fun. This, my friends, is ultimate Adele.

Even in comparison to the live performances of "Hello" and "When We Were Young," it becomes clear that Adele has hit her stride with this one. While the "Hello" performances have been emotive and tear jerking, and her "When We Were Young" live cover was expressive, Adele singing "Water Under the Bridge" on Fallon is the witnessing of an artist with complete control of her craft. That, and it looks like she's having a hell of a time. Whereas her personality (sassy, upbeat, cheeky) doesn't come through on songs and in performances of ballads like "Hello," it's managed to simultaneously shine, and not overshadow her talent here. That can't be an easy feat to balance. (But, for the queen, just another day in the life, probably.)

Since it was released Friday, EW reports that 25 has already sold over 2 million copies, and could become the biggest first sales week for an album of all time (surpassing N*SYNC's No Strings Attached.) Today, you can't have a conversation about music that doesn't include Adele or 25 , proving that sometimes, a break can be a good thing (just don't tell that to Rachel, you know?) Watch the full performance below: