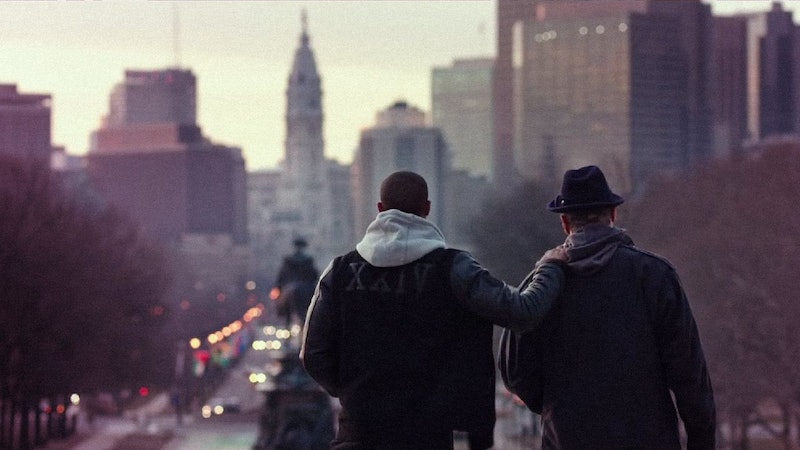 It’s always exciting to see your hometown on the big screen. Philadelphians in particular, like myself, pride themselves on the hardscrabble, rough and tumble way in which the city has been presented in cinema, which is one reason why the Rocky movies have been so popular there. With Creed , a Philly-set sequel focusing on the rise of Apollo Creed’s son, played by Michael B. Jordan, opening Nov. 25, an entire new generation of Philadelphians will see themselves in the movies.

One of the main reasons Philadelphians have always loved Rocky Balboa is because he represents the underdog. No matter who you ask in whatever field, be it music, engineering, sports, or economics, Philadelphia has always been the underdog in some way, and Philadelphians have always felt that pressure and that pride. So for us, Rocky represents being counted out, or even not counted at all, and the ability to rise above the naysayers and overcoming the struggle.

It’s not just Rocky that’s always embraced this mentality. Bradley Cooper and Jennifer Lawrence recently embodied the Philadelphian spirit of, “Nobody believes we can do this, so let’s show ‘em!” in the Multi-Academy Award-nominated Silver Linings Playbook. Tom Hanks won one of his Best Actor Oscars by winning a seemingly impossible discrimination case in Philadelphia. In Invincible, Mark Wahlberg played Vince Papale, a bartender who tried out for the Eagles on a whim and actually made the team. Even in the realm of so-called chick flicks the scrappy Philadelphia attitude remains. In 2005’s In Her Shoes, Toni Collette bounces back from bad jobs, bad breakups, and a sister with a bad attitude. And these films have nothing on the ultimate Philly rags to riches success story of TV, The Fresh Prince of Bel Air. Years after Will Smith left my home neighborhood of Overbrook in West Philly, he’s still considered one of the area’s prime examples of pulling oneself up through adversity.

The Philly and Philadelphians of Creed wouldn’t work if the new film didn’t also fully resemble and represent that same psychology, which it does to great success. But Creed also uses an interesting shift to convey just how much Philly has changed since the Italian Stallion took his first run up the Art Museum steps. Rocky and Adonis “Donnie” Creed represent the two current faces of Philadelphia; one older and of European stock, one young and black. But it’s saying something hopeful that Baby Boomer Rocky training Millennial Donnie comes so easy to the both of them. The differences continue but are never a problem. Donnie trains Front Street Gym, rather than Mighty Mick’s. Rocky was accompanied on his runs by squealing children, but Donnie races teenagers popping wheelies on dirt bikes. While Rocky and Adrian, like so many Italian Americans, made their home in South Philly, the setting of Creed shifts the action up to North Philly in the neighborhoods of Fishtown and Kensington, where the population has historically been made up of African American residents.

The two neighborhoods have seen an influx of artists and musicians in recent years, as well as the typical increase of bars and restaurants that accompany becoming a hip, young neighborhood. Bianca (Tessa Thompson) plays a show at Johnny Brenda’s, whose 2003 renovation as a live music venue, according to Reuters, “marked a turning point in the gritty Philadelphia neighborhood.” After decades of population decline, Philadelphia saw its first increase in population after the 2010 census. According to A City Transformed: The Racial and Ethnic Changes in Philadelphia Over the Last 20 Years, a study by The Pew Charitable Trusts, “The biggest change in the ethnic and racial makeup of Philadelphia has been the decline of the white population...The city's African-American population grew by 3.3 percent from 1990 to 2010, a percentage that suggests relative stability.” The city’s Hispanic population grew by 110 percent, while the Asian population up by 127 percent. Though white flight had a definite hand in theses changes and gentrification may be contributing second issues, these stats represent a changing Philadelphia. In 2006’s Rocky Balboa, Paulie Pennino viciously remarked, “Italian food cooked up by a bunch of Mexicans ain't so special,” but Donnie and Bianca happily enjoy a first-date cheesesteak cooked up by immigrants at Max’s on Germantown Avenue. So as the face of Philly changes, so must the films that represent it, and while much of Hollywood is ignoring them, Creed should, and is, being praised for its representation of people of color on the big screen.

But despite these changes, much of that Philly pride remains the same. We’ll always be the underdog, the working class, the down and out that rises up through a rough and tumble neighborhood. And Philadelphians will always love watching themselves and their city portrayed this way. While other locales might balk at movies that point out their flaws or underestimate its citizens, Philadelphians take it as a challenge. Put us down, beat us up or take a shot, we’ll take you on. Then, we’ll take you out for a cheesesteak.