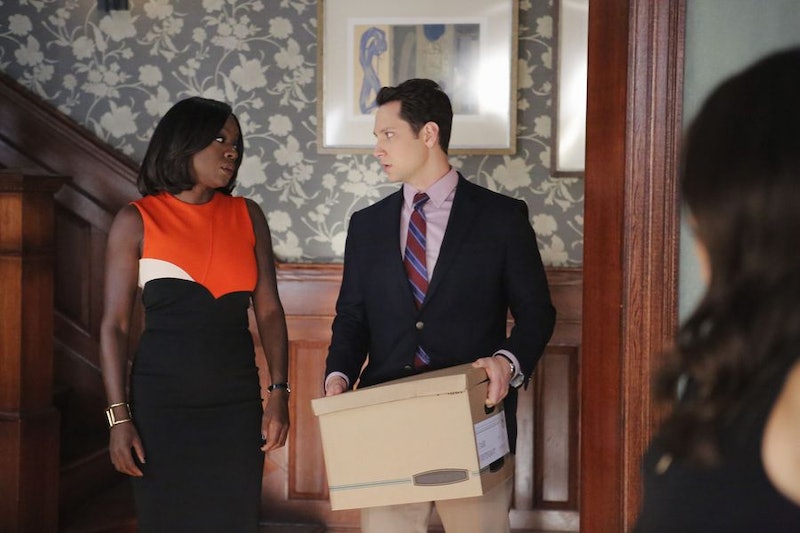 I don't need to tell you that the How To Get Away With Murder midseason finale was chock-full (or rather trunk-full) of epic twists and turns. Seriously, my heart rate and stress levels still haven't gone back to normal even after a week of recovery time. But even amid all of the chaos and jaw-dropping answers that were revealed — like finally identifying Annalise's shooter — there are still a ton of storylines that were left wide open. One example in particular that immediately comes to mind is Asher's trip to the police station, which the fall finale failed to address.

During one of the flash forwards from a few weeks back, we saw Asher enter the police station, claiming that he wanted to make a statement. And considering that this takes place sometime after Emily Sinclair's death and the events at the Hapstall manor, it seems only logical to conclude that Asher is making a confession and turning himself in. But at the same time… what if he's not? When it comes to a show like HTGAWM, I've come to realize that nothing is rarely ever as straightforward as it seems. In fact, I wouldn't put it past the show for Asher's confession to all be part of Annalise's latest getting-away-with-murder plan.

For starters, Asher is no longer the innocent character we've come to know and love. I mean, we still love him of course, but now that he's an official member of the Murder Club his level of innocence has suffered a significant drop. He now has almost as much to lose as any of the other members of the Keating Five. So if he was going to make an honest confession, he'd be bringing everyone else down with him and then the show would be over. So, if anything, I bet this confession is going to come with some significant pieces of information missing.

And let's not forget the fact that he's with badass Bonnie right now. There's no way she'd let him out of her sight long enough to go to the police station unless it's something he was instructed to do. His one opportunity was when she was cleaning herself up at a public restroom, but instead of abandoning her like we'd originally thought, he'd actually just gone to get the car ready to be washed. Why help destroy the evidence if you're just going to try to confess to it shortly afterwards?

But regardless of whether or not Asher has gone rogue, executive producer Peter Nowalk assured TVLine in a recent interview that we'll get to the bottom of his actions very soon upon the show's return. "We’ll obviously find out what happens with all of those in our first hour back," he teased. "The Asher thing could go many ways. He could be confessing — he was in shock from the moment he hit Emily Sinclair right through buying that carwash ticket. Now that he’s coming out of it, does he just act like a normal person? Is him going to the police part of the plan? Or is it unrelated — does he want to make a statement that his cat is missing?"

Basically, I wouldn't rule anything out at this point, but given everything that's happened, I'd tempted to think that Asher's confession is all part of the bigger plan Annalise set in place. We'll just have to wait and see how it all fits together. Is it February yet?